Nucifora delivered his state of the rugby nation to the media, on Thursday morning, and revealed the IRFU had offered Farrell a contract extension of two years, after the World Cup up until 2025, even before he took his squad to New Zealand. Ireland beat the All Blacks 2-1 in an historic Test Series, making the Farrell business seem like even smarter business.

"It shows the confidence we have in Andy," said Nucifora.

While Joe Schmidt identified a plan to have three quality players in every position, after Ireland 2015 World Cup quarter final exit, Farrell has expanded that base need to 50 players. 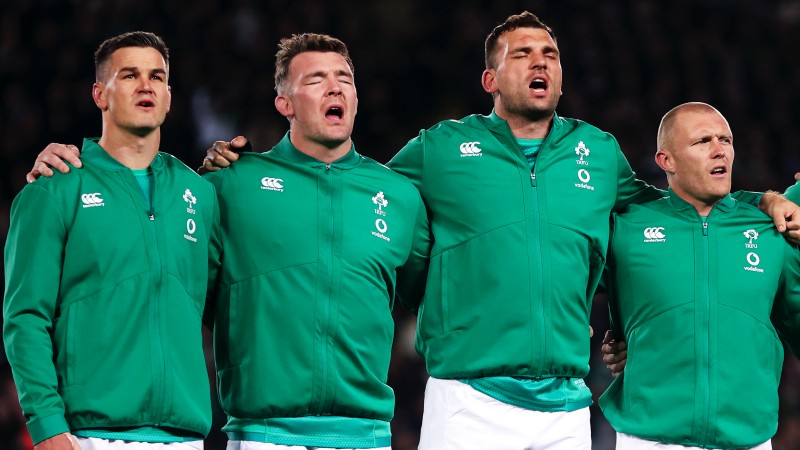 END_OF_DOCUMENT_TOKEN_TO_BE_REPLACED

While acknowledging there was 'robust debate' and 'healthy friction' between the IRFU and the provinces over the Emerging Ireland mini tour to South Africa, earlier this month, David Nucifora believes the benefits are already clear.

"It's a relatively medium-term outlook," he says. "Our intention was to try - on the back of the New Zealand tour and the Maori games - find out who our best 50 players in the country are.

"We've got a pretty good handle on our top 30. Our top 50, there is still plenty of debate as to who fits into that. We want to ensure that we can do everything we can over the next 12 months to find out who our top 50 are.

"Because by the time we get to next summer, we are choosing a 33-man squad to go to the World Cup. We're going to need that squad of 50 to delve into, at different points in time. We're not going to have all 50 players fit and available - we know that. So we have to make sure we've got the best players. Not think we've got the best, but know we've got the best.

"We needed to find ways to ensure we were comfortable with exposing certain players to certain conditions - how they work with a different group of coaches, adapt to a different style of game. It would have been easy for us to leave the players here and let them play for their provinces, but that wouldn't have shown us anything different. You need to take people out of their comfort zone, show them something different. You need to spend time with these players.

"If the players had stayed and played with their provinces, our national coaches wouldn't have been any the wiser to what they've been, previously. What was done in a two-week period blew me away. It surpassed what I thought would be achieved. What the coaches learned about those players, in those two weeks, has rearranged the pecking order, as it currently sits.

"In their minds, now, they have a different top 50 players, as to what they had before that trip. It also gives them a full 12 months to work on their shortcomings, now that they are fully aware of them, with some of those players. So they will either maintain their position in the top 50 players or get them closer to that top 50." 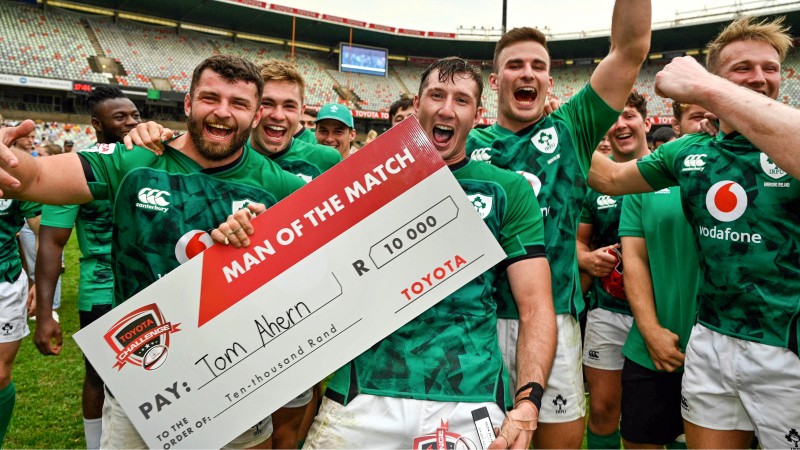 Thomas Ahern, centre, of Emerging Ireland celebrates with his Man of the Match Award, at Toyota Stadium in Bloemfontein. (Photo by Johan Pretorius/Sportsfile)

David Nucifora says Andy Farrell and his coaches have 'a pretty good handle' on their top 30 players.

Here are the players we feel would make up most of those top 30 slots. We will start off with our 'Top 20 rugby players in Ireland' article that we posted after the series win over New Zealand:

Wildly, that leaves TWENTY TWO players that were named in the latest squad, for the Bank of Ireland Autumn Nations Series.

From that selection, here are our next 10 players:

And here are the players that are, in our opinion, rounding out the 30-50 slots.

It is little wonder that David Nucifora spoke of rival unions being 'envious' and 'jealous' of how well stocked the World No.1 side is.


popular
Sean Dyche set to be named Everton manager after Marcelo Bielsa talks break down
Roy Keane flatly rejects longstanding perception of ex-Man United midfielder Paul Ince
Allianz National Football League Round 1: All the action and talking points
Roy Keane leaves ITV pundits in stitches after Pep Guardiola's pre-match interview
Conor McGregor hit by car ‘at full speed’ while cycling
"I don't like to fill my time that way" - O'Hora going his own way in an era of obsessives and covering all bases
Replay is not the answer for Glen-Kilmacud mess of epic proportions
You may also like
5 days ago
Liverpool reportedly selling Caoimhin Kelleher for Jude Bellingham funds
5 days ago
Robbie Henshaw on his life-long friendship with Bundee Aki and Netflix documentaries
1 week ago
Evan Ferguson sends Soccer Saturday panel bananas with late equaliser
1 week ago
Eamon Dunphy blames Roy Keane's behaviour for Declan Rice choosing England
1 week ago
Can you name the Republic of Ireland Premier League player from their wikipedia?
1 week ago
Kieran Treadwell the most unfortunate Ireland player to miss Six Nations call
Next Page