Ireland are looking to end their Test year on a high.

Andy Farrell has named his Ireland team to face Australia, on Thursday afternoon, as he seeks to end the calendar year as World No.1.

Ireland have followed out on their summer series win over the All Blacks by defeating South Africa and Fiji, in Dublin. The Wallabies are in town, this weekend, and a 12th straight home Test win would see Farrell's men finish atop the world rankings, heading into a World Cup year.

Here (in our live feed, below) is all you need to know about the Ireland team announcement and the final Test match of 2022: 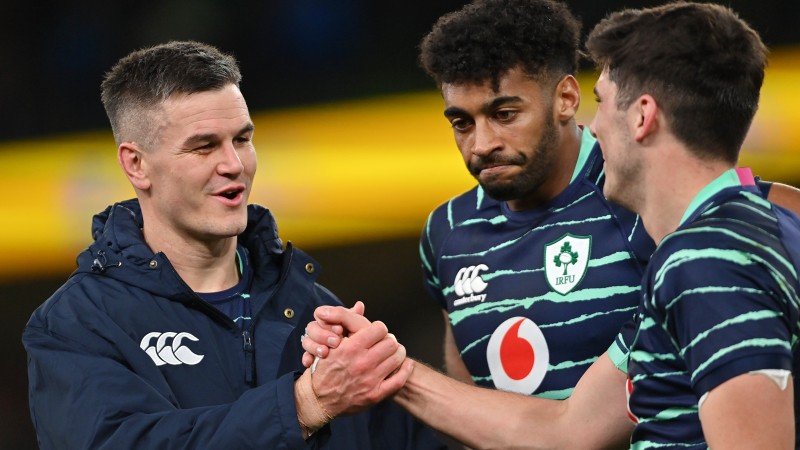 5 November 2022; Jonathan Sexton, left, and Jimmy O'Brien of Ireland after the Bank of Ireland Nations Series match between Ireland and South Africa at the Aviva Stadium in Dublin. Photo by Ramsey Cardy/Sportsfile

END_OF_DOCUMENT_TOKEN_TO_BE_REPLACED

Ahead of the game, Ireland captain Johnny Sexton told reporters that he would happily trade winning his second World Rugby Player of the Year accolade if it meant his team could get one ober the Wallabies.

"It's always nice to be recognised like that," said Sexton, "I’m not going to lie.

"It's not something you go searching for but to be recognised in that area is very special. I would prefer a win and to play well on Saturday than win that, because ultimately at the end of the day it’s opinion. Whereas what you produce on Saturday is what it is, what you see, and it’s the only thing you can control. All my focus is on that and to be recognised is enough."

Ireland vs. Australia kicks off at 8pm on Saturday, at Aviva Stadium, and there will be live TV coverage on Virgin Media and Amazon Prime.


popular
Talksport presenter puts Martin O'Neill to the pin of his collar over Declan Rice and Jack Grealish
Roy Keane scores winning goal past Micah Richards in ITV v BBC pundits match
World Cup Power Rankings: The top 10 players at the tournament ahead of the quarter-finals
Gary Neville sticks up for Ronaldo as contextless pictures and videos taken as gospel
Rory McIlroy explains 'falling out' with Shane Lowry that lasted a few years
Cristiano Ronaldo's sister blasts Portugal boss' decision to start forward on the bench
"There's no soccer, hurling, or rugby" - Kilcoo's secret to success

You may also like
6 days ago
Shay Given on how far Ireland could've gone at the 2002 World Cup with Roy Keane in the team
6 days ago
From Ireland to Argentina: Alexis Mac Allister's Irish roots explained
1 week ago
Former England international admits he wishes he had played for Ireland
2 weeks ago
Two baffling omissions as four Ireland stars make World Rugby 'Dream Team' of the Year
2 weeks ago
Josh van der Flier claims World Rugby Player of the Year at Monaco ceremony
2 weeks ago
"Highlight of my Ireland career" - Behind the scenes as Jack Crowley and Ross Byrne covered for a legend
Next Page