There are 11 uncapped players in the squad.

Andy Farrell has named a 37-man Ireland squad for this summer's two-Test spin against the USA and Japan. Leinster lock James Ryan will captain the side.

Harry Byrne, Tom Daly, Fineen Wycherley, Paul Boyle, Gavin Coombes and Nick Timoney are the big call-ups that spring off the page after the IRFU announced the squad for Ireland's two games.

Interestingly, Johnny Sexton, Keith Earls and Cian Healy do not feature. Farrell says he has excluded the trio as he wants to give experience and game-time to a wider spread of players. Farrell comments:

"I know the players will come in eager to make the most of this opportunity to pull on the green jersey and play in front of supporters for at the Aviva Stadium for the first time in 18 months. Johnny (Sexton), Cian (Healy) and Keith (Earls) will not be involved in this window as we grow the experience of other players. It will be a great opportunity to see can this group perform at this level."

END_OF_DOCUMENT_TOKEN_TO_BE_REPLACED

First up for Ireland, on July 3, are Japan. The team that beat us at the 2019 World Cup will be in Europe to provide a warm-up against the British & Irish Lions, at Murrayfield, on June 26 before heading over to Dublin.

Next on the agenda are the USA, who themselves will be providing warm-up opposition to the Springboks ahead of the Lions Test Series. 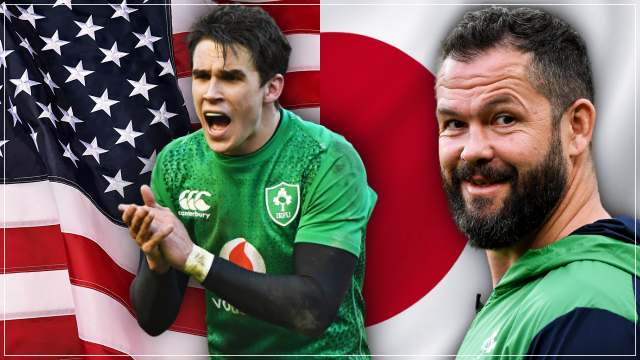 Connacht supporters will be buoyed to see five players included in the squad, but Gavin Thornbury is unfortunate to miss out.

Will Addison is back in the Ireland squad after his injury issues over the past two years while Robert Baloucoune is also included.


popular
The four stone-cold certainties for All-Stars even as early as this
"He's actually smiling putting the ball over the bar. He should nearly be fainting." - Ryall on Limerick's legacy
Eamon McGee just couldn't help himself with Armagh-melee tweet
Gavin Coombes one of four Irish players to push themselves into Test picture
"The economy was one of the big reasons" - Cadogan's move from an electrician to personal training
Full Ireland player ratings after Maori All Blacks teach us an early lesson
Kylian Mbappe reportedly wants PSG to sell Neymar

You may also like
12 hours ago
Bundee Aki understandably emotional, as Ireland pay moving tribute to late Sean Wainui
13 hours ago
Full Ireland player ratings after Maori All Blacks teach us an early lesson
1 day ago
"We could lose all five games" - Darren Cave with a rare take on Ireland's chances
1 day ago
Mike Lowry and Peter O'Mahony in First Test contention as Ireland shuffle deck
1 day ago
"Significant" knee injury ends Iain Henderson's tour of New Zealand
1 day ago
Ireland include plenty of new faces in team to face Maori All Blacks
Next Page