Just when it looked like the 2020/21 Irish rugby season was petering out, we have some Test match rugby to look forward to, and in Dublin too. Ireland will have a couple of test encounters in July, and a chance to blood new players.

Fresh on the heels of news that the Six Nations (men's, women's and U20 championships) will remain on free-to-air television - via a shared RTE and Virgin Media deal - World Rugby confirmed a slate of Test matches for its leading sides.

The IRFU then came out with more details on the fixtures, with Ireland head coach Andy Farrell in his element. He declared:

"We now have two games at home to focus on which will be great for the group. There have been some strong individual performances in the Rainbow Cup over the past couple of weeks and there are plenty of opportunities for players to put themselves in the frame for selection for the international window in July."

END_OF_DOCUMENT_TOKEN_TO_BE_REPLACED

With the planned 2021 summer tour to Fiji postponed fore the foreseeable future [the Covid-19 pandemic and travel restrictions combining for that one], Farrell and all involved in the IRFU will be delighted at the opportunity to get some Test match rugby in the calendar. 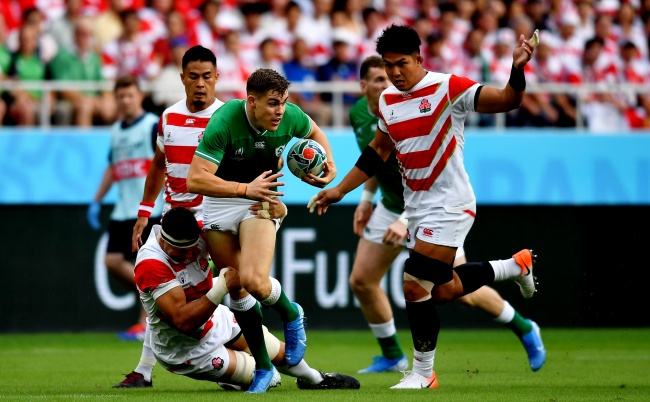 Garry Ringrose is tackled by Luke Thompson of Japan during the 2019 Rugby World Cup. (Photo by Brendan Moran/Sportsfile)

END_OF_DOCUMENT_TOKEN_TO_BE_REPLACED

First up for Ireland, on July 3, are Japan. The team that beat us at the 2019 World Cup will be in Europe to provide a warm-up against the British & Irish Lions, at Murrayfield, on June 26 before heading over to Dublin.

Next on the agenda are the USA, who themselves will be providing warm-up opposition to the Springboks ahead of the Lions Test Series.

The fixtures, it is noted by the IRFU, are subject to final agreement and further details will be announced in due course

Also part of the summer slate are three France games against Australia, Down Under, and Fiji taking on New Zealand.


popular
The four stone-cold certainties for All-Stars even as early as this
"He's actually smiling putting the ball over the bar. He should nearly be fainting." - Ryall on Limerick's legacy
Eamon McGee just couldn't help himself with Armagh-melee tweet
Gavin Coombes one of four Irish players to push themselves into Test picture
"The economy was one of the big reasons" - Cadogan's move from an electrician to personal training
Full Ireland player ratings after Maori All Blacks teach us an early lesson
Kylian Mbappe reportedly wants PSG to sell Neymar
You may also like
12 hours ago
Bundee Aki understandably emotional, as Ireland pay moving tribute to late Sean Wainui
13 hours ago
Full Ireland player ratings after Maori All Blacks teach us an early lesson
1 day ago
"We could lose all five games" - Darren Cave with a rare take on Ireland's chances
1 day ago
Mike Lowry and Peter O'Mahony in First Test contention as Ireland shuffle deck
1 day ago
"Significant" knee injury ends Iain Henderson's tour of New Zealand
1 day ago
Ireland include plenty of new faces in team to face Maori All Blacks
Next Page