It was all hands to the pump for France after fifteen minutes.

Having conceded an early try when Ireland captain Rory Best touched down after just three minutes, the French were soon made aware of the fact that they were in a dog-fight at the Aviva Stadium.

What appeared to be a quick riposte from France's full-back was ruled out for an earlier knock-on and after that, it was a case of Joe Schmidt's men inching their way forward for a second try.

The inches turned into yards when Iain Henderson picked Sebastien Vahaamahina up like a toddler and drove him backwards towards his own tryline.

It looked like the second try arrived moments later when some opportunism from Cian Healy gave the referee something to think about but it was eventually agreed that the Irish prop did not have enough downward pressure to warrant the score.

While the five points were not awarded, perhaps the biggest shame was that it made James Ryan's monster his on Antoine Dupont irrelevant.

With France scrambling to escape from behind their own tryline, Ryan was taking no prisoners and acted as something of a brick wall for Dupont, whose forward momentum was halted in no uncertain terms. 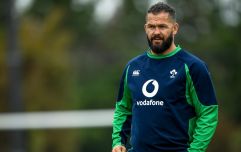 END_OF_DOCUMENT_TOKEN_TO_BE_REPLACED

The second try of the opening half finally arrived on the half-hour mark courtesy of Johnny Sexton, who wrapped around Garry Ringrose to finish under the posts and give himself no problems from the subsequent conversion.

The third try of a dominant first half arrived when Jack Conan scored his sixth try for his country to make it 19-0 going into the break.


popular
"You don't want to change a winning formula" - Maher and McCormack the key for Borris-Ileigh
The only man who can stop Liverpool is back to haunt them
"I probably should, but I don't think I will" - Cerrone vows to stand and scrap
"The support of the people means a lot to me" - Conor McGregor
"I'm up in UCD so I could just go out with a few balls by myself and practice it"
Bundee and CJ far from their best but Andy Farrell keeps faith
UFC star Donald Cerrone is missing half his intestines due to an accident
You may also like
6 days ago
Injuries to three form players cause Six Nations concern for Andy Farrell
2 weeks ago
Irish Rugby's Team of the Decade
1 month ago
Rob Howley placed bet on Wales player in Grand Slam win over Ireland
9 months ago
How culpable are Johnny Sexton and Conor Murray in Ireland's shortcomings?
9 months ago
Joe Schmidt unhappy with media announcing Ireland team last Wednesday
10 months ago
No-one is safe from the axe and one man may struggle to make World Cup squad
Next Page