The trouble with analysing the Toulon scrum is that with Wayne Barnes on the whistle this Sunday, the setpiece is likely to descend into guesswork

The biggest problem with the English referee is that while I don't think he is actually biased against Irish sides, he's just not up to the job.

On the two occasions he took centre stage (and when Barnes is reffing, he really does take centre stage), Barnes gave little rewards to the dominant scrum on each occasion.

END_OF_DOCUMENT_TOKEN_TO_BE_REPLACED

Ireland struggled big time in the front-row against France at the Aviva Stadium, but it could have been much worse, had there been a competent referee in charge.

And when Ireland took on Wales in Cardiff, their overwhelming superiority was completely ignored, and in the end, it was even punished, and for what we still don't know.

While it's naive to assume a referee knows every trick up the sleeve of a prop, a basic understanding of the physical demands of the position should be a given. One particular scrum in Ireland's game with France sums it up perfectly.

With the clock stopped at 9:40, Barnes called for the front rows to begin packing down for an upcoming scrum, but there was one big problem - there was still a French player getting treatment.

Rather than getting the packs to break up until the game was ready to be restarted, Barnes had them hold in their positions for more than 20 seconds before he was ready to instruct them to crouch down.

In the pic below, watch how Barnes is marking the scrum and the sides binding up at 9:40 on the clock. 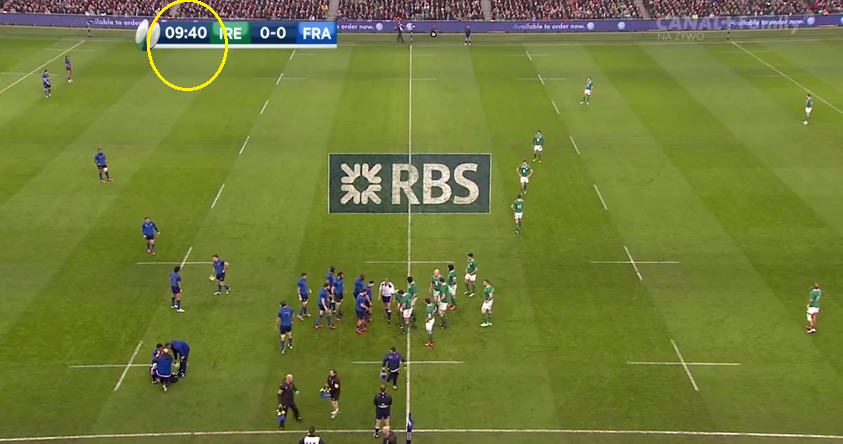 By the time Barnes actually instructed the teams to crouch, the clock had reached 10:02, an obscene amount of time to keep a scrum bound together in that position.

END_OF_DOCUMENT_TOKEN_TO_BE_REPLACED

Try it for yourself. Go into a squat position, and then bend forward, so that your torso is parallel to the ground. Hold it there for 22 seconds, and I can guarantee you that your legs will start to get wobbly. And it's even worse for the second rows, who are trying to wedge themselves between the thighs of 18 stone props.

Naturally, when the scrum eventually set, it collapsed almost instantly, which is inevitable when you've been in a squatting position for 32 seconds.

Every referee will miss foul play at the scrum for the sheer reason that you can only see one side at a time, but when there are clear infringements on both the blind and openside, then you really have no excuse.

In this second half scrum in the French game, both Mike Ross and Jack McGrath were guilty of scrum infringements, neither of which were spotted by Barnes.

On the tight-head side Ross shortened his bind and locked onto the arm of Eddy Ben Arous, with his locked out legs showing the extent of his troubles below. 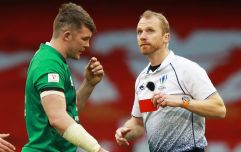 Wayne Barnes' comments show why Peter O'Mahony had to go

END_OF_DOCUMENT_TOKEN_TO_BE_REPLACED 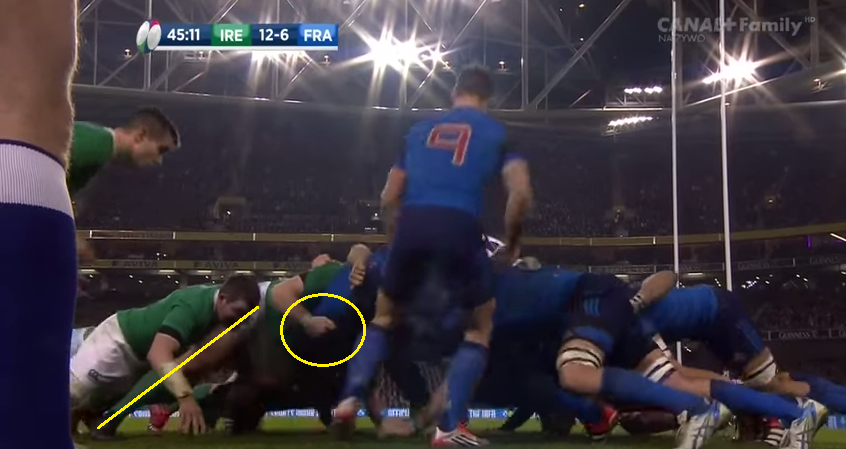 That really should have been spotted by touchjudge Nigel Owens, but Barnes missed an even more blatant foul on the other side of the scrum, despite being only a couple of feet from it.

As we can see below, Jack McGrath has angled his body in on Rabah Slimani, popping out his hips and driving inwards. Still, Barnes saw nothing wrong. 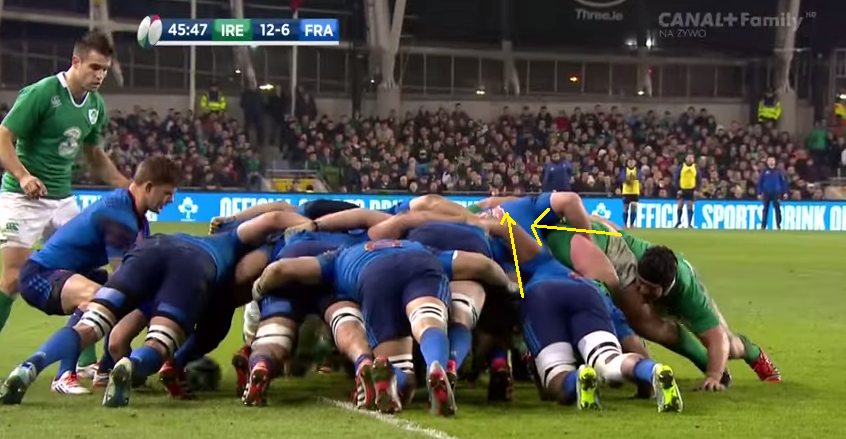 One major area where Barnes has displayed his clear lack of understanding is when a scrum wheels. In each of the French and Welsh games he made crucial, and incorrect calls when a scrum was wheeled, and although he was at least consistent with them, he wrongly penalised sides for driving crooked when they were actually driving straight.

While intentionally wheeling a scrum is illegal, a scrum can rotate naturally. If the defending props both drive straight, but at differnt forces, the the scrum will naturally begin to move forward and wheel, and once it has moved forward through the axis by 90 degrees, the scrum is reset, with the team not in possession of the ball awarded the put in.

This is exactly what happens in this scrum, but Barnes gets his decision all wrong.

Here is the scrum as it starts, with the yellow line running through the middle acting as the axis to judge the movement on. 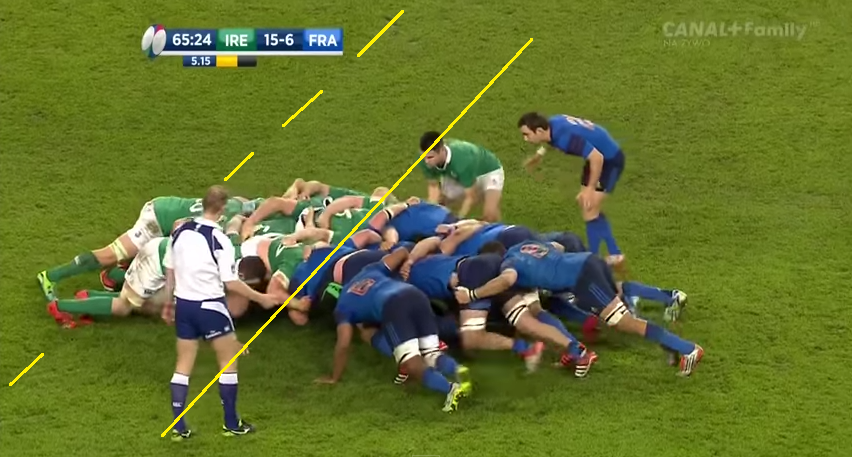 As we can see as it moves on, replacement loose-head Vincent Debaty gets a nudge on Marty Moore, and drives the scrum forward on his side, while Uini Atonio holds his position at tight-head, acting as an anchor. 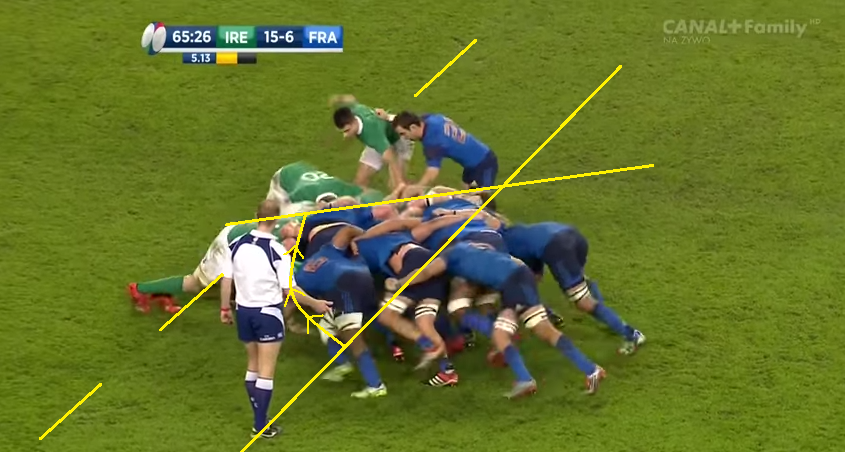 Eventually, the scrum turns 90 degrees, and as we can see below, Debaty has moved considerably forward from his original position, rather than merely rotating on the spot, which would have been illegal. Barnes, however, penalises France. 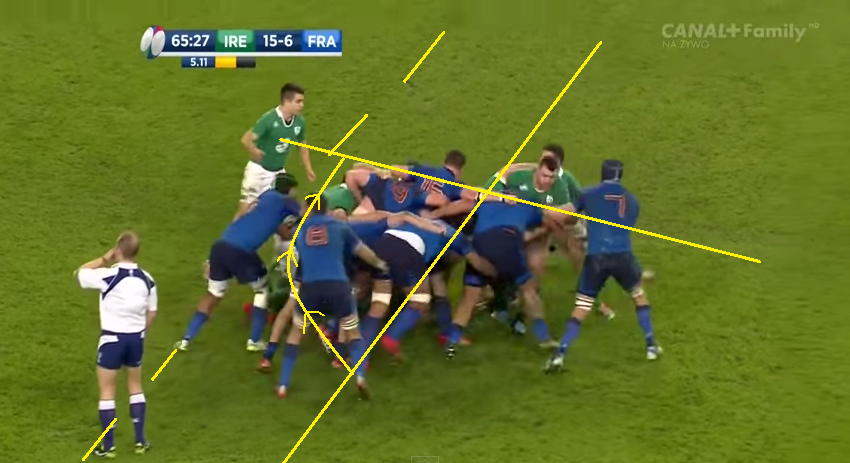 In the closing stages of Ireland's defeat in Wales, we had a near identical situation, which again Barnes incorrectly called (at least he's consistent, eh?).

Again, we can see the yellow axis of the scrum as it sets, to be used as a reference point. 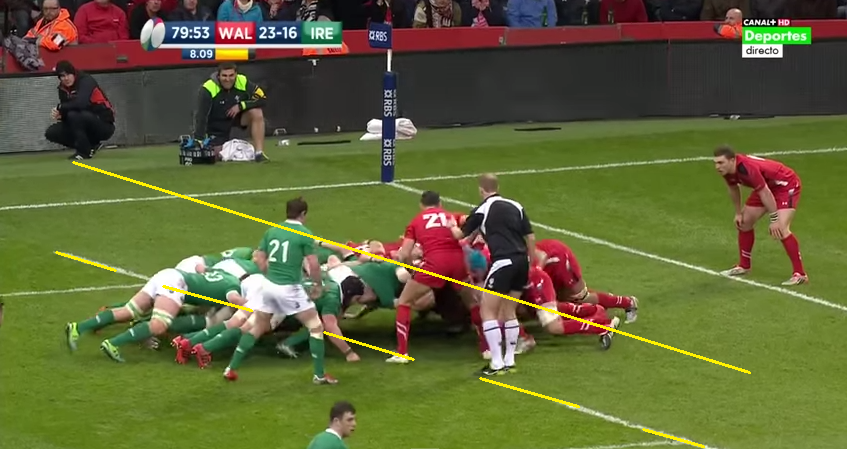 Just as Debaty did in the scrum above, Healy got the better of his opponent Aaron Jarvis, and the scrum begins to move forward on his side, with Marty Moore anchoring. 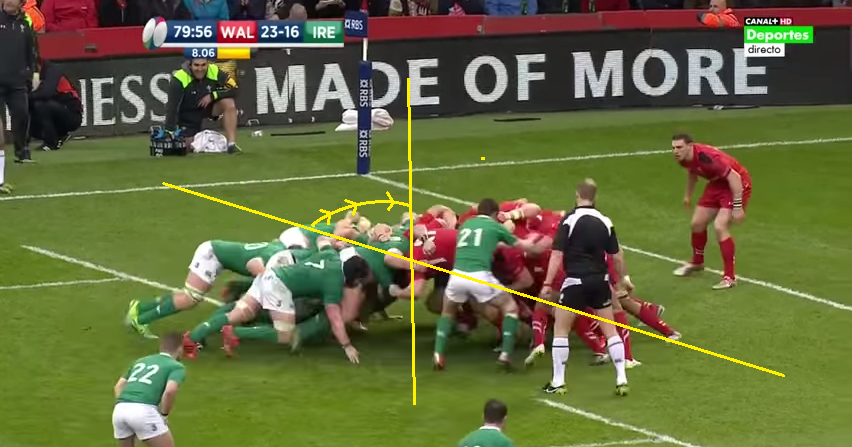 With Ireland now moving forward quickly, Jarvis tries to rotate his body, so that the scrum is wheeling, rather than just going backwards, and it comes to the stage where the scrum rotates even further beyond the required 90 degrees for a reset. However, just like against France, Barnes wrongly deems it to be illegally wheeled, and awards a penalty to Wales. 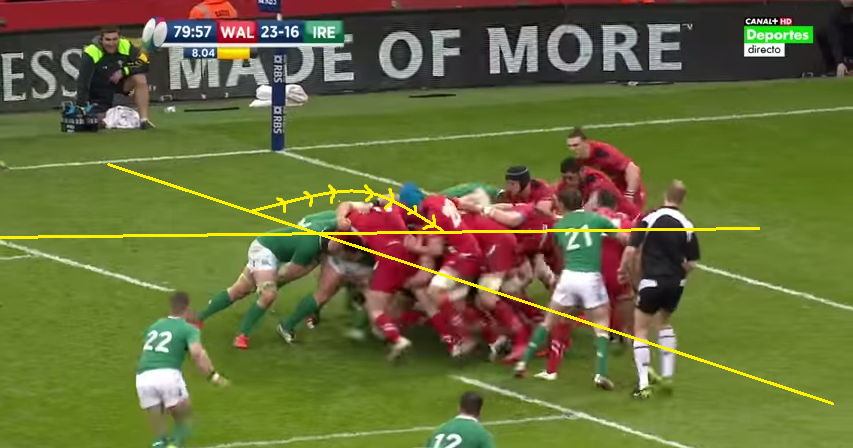 On closer examination of the scrum, there were several Welsh players clearly offending, which should have resulted in far more than just a turned over scrum.

In the still photo below, we can see that Aaron Jarvis has collapsed his side, and we can also see that both Toby Faletau and Sam Warburton have completely disengaged, cynically stacking their defence with potential tackers despite the ball still being in the scrum. 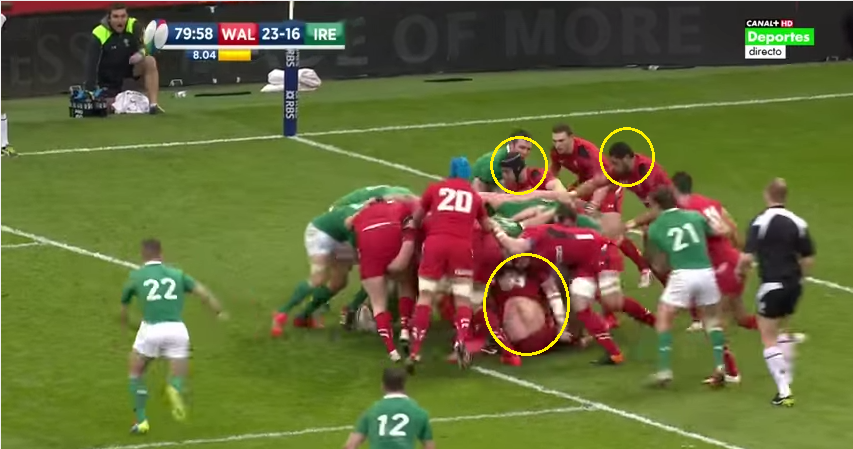 With Leinster's scrum so dominant against Bath two weeks ago and Alexandre Menini such a clear weak-link in Toulon's victory against Wasps, the scrum should be an area Leinster target to put themselves on the front foot.

Whether they'll be given the chance, not even Wayne Barnes could tell you that.


popular
GAA club transfers that shocked the county: Jason Sherlock
Here's all the GAA games on the tube this weekend as the provincial championship heats up
Fermanagh footballer opens up about losing her mum to suicide and urges people to seek counselling
Jordan Larmour enjoys satisfying bit of revenge on Mack Hansen
Ruesha Littlejohn gate-crashes Katie McCabe's interview after another player-of-the-match display
Sean O'Brien and Alex Goode on the pre-match meals they swear by
Roy Keane's three leadership tips he gave to Owen Farrell can't be argued with
You may also like
1 year ago
Wayne Barnes denies Ireland penalty try with huge call
2 years ago
Ireland discover Rugby World Cup pool stage referees
2 years ago
Munster fans rage at Wayne Barnes as eye gouge and horrendous tackle on Peter O'Mahony ignored
3 years ago
Ireland's disciplinary record with and without Wayne Barnes
3 years ago
"From previous dealings with Wayne Barnes, he likes to be the centre of attention" - James Downey
3 years ago
Wayne Barnes to Ma'a Nonu - "If you come ask for a yellow card you'll get one"
Next Page