We hope there was a happy ending to the 'Lucy's chicken' saga, too!

Bundee Aki may have only started one Test for Ireland on this end-of-season tour to New Zealand, but his reputation as one of the best centres in world rugby has only grown.

Aki had the honour of captaining Ireland's midweek team in their tour opener against the Maori All Blacks and was the best Irish player, along with Gavin Coombes, in that game.

END_OF_DOCUMENT_TOKEN_TO_BE_REPLACED

He then had bench roles for the First and Second Tests but arrived into the Dunedin encounter after 30 minutes, when Garry Ringrose's tour was ended by concussion. He went straight into fifth gear and made a number of huge carries, and tackles, for Ireland as they won by 11 points.

Knowing he would be needed for the Third Test, Andy Farrell left him out of the second Maori All Blacks game. Robbie Henshaw would start at outside centre, in Wellington, and Aki was inside him.

Both centres had immense games and made their presence felt in attack and defence. Aki is often type-cast as a guy that will take the ball straight up the guts, but he showed lovely footwork on Saturday and stepped inside charging Kiwi bodies on three different occasions to get his side well over the gainline. 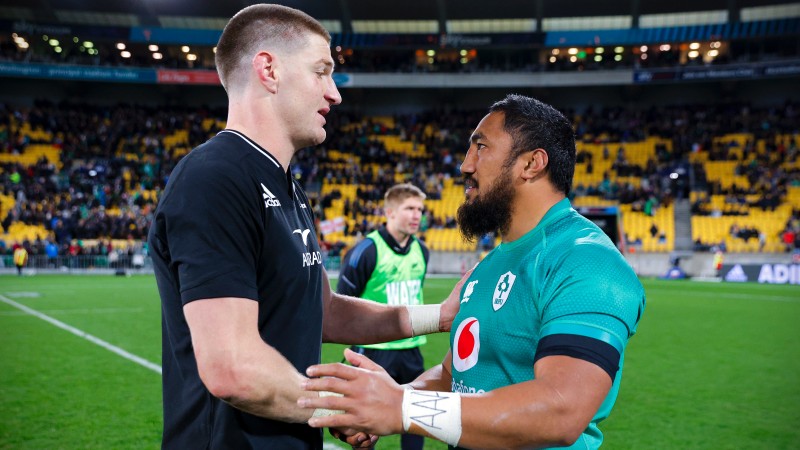 All Blacks legend couldn't get enough of Bundee Aki

END_OF_DOCUMENT_TOKEN_TO_BE_REPLACED

Bundee Aki also showed a great passing range, in that Wellington victory. He was linking up so effectively that he had All Blacks legend Justin Marshall - a Sky Sports NZ commentator for the game - cooing and raving about him.

The Connacht centre made 44 metres off his 12 carries, won a big breakdown turnover in that breathless first half, set up Henshaw's try and also packed down as auxiliary flanker when Andrew Porter was sin-binned and the pack needed extra heft at scrum-time. His only blemish were a handful of missed tackles [he still made eight] as he tried for the hard press to avoid the ABs going wide.

END_OF_DOCUMENT_TOKEN_TO_BE_REPLACED

Of all the Aki moments and clips that were doing the rounds at the weekend, this was one [below] that we enjoyed most. Ireland's 19-point lead, at half-time, had been whittled down to three but they boldly went for an attacking lineout when they had a penalty awarded to them.

As Rob Herring peeled off the back of the rolling maul to dive over and score, Bundee Aki came barrelling in to celebrate. The first man he encountered was referee Wayne Barnes.

"Sorry Wayne," he exclaimed as he found someone in green to hug, instead.

Wayne Barnes just excused himself as Aki, more appropriately, found someone in green to hug instead.

Aki did not last much longer than that. He hurt his shoulder and was replaced by Keith Earls for the closing stages, and the moment when Tadhg Beirne wrote himself in bold into Irish rugby history.

With James Hune enjoying such a fantastic season, Bundee Aki arrived in New Zealand with his place in the matchday 23 under threat. He ended the tour back in possession of the No.12 jersey, and he will take some shifting.

And, for all those wondering about the Lucy's chicken reference, here was Bundee Aki playing the perfect teammate and looking out for Peter O'Mahony amid the jubilant scenes, in Wellington, at the weekend.

Running a screen for the big man from Cork, and keeping him fed and watered.

It has been a long, hard season. These lads will enjoy their down-time over the next five or six weeks.


popular
Barcelona allowed to register four new signings, but Jules Kounde misses out
"He can add something to our attacking line up" - Jamie Clarke signs for Northern Irish soccer club
Angry Frenkie de Jong 'tells Barcelona teammates he could join Man United'
Erling Haaland registers strange statistic on home debut as Mark Travers keeps the City score down
Ranking the best county GAA songs of all-time (32-1)
"It was unfair on the Galway backs” - Tomás Ó Sé admits that Kerry benefitted from unfair rule
Antonio Conte 'banishes' four Tottenham players from first-team
You may also like
2 weeks ago
“My confidence was on the deck" - Aaron Connolly explains why he has made the move to Italy
2 weeks ago
Every Irish transfer in football, this summer, as several big deals get done
3 weeks ago
Six Irish players make damn impressive 'World XV' that would take some beating
3 weeks ago
The frontrunners for Ireland's 33-man squad for the 2023 World Cup
3 weeks ago
All Blacks media manager explains why Ian Foster appearance was cancelled after Ireland defeat
3 weeks ago
Warren Gatland selects nine Irish players in his strongest Lions XV, right now
Next Page