"What a game from the big man."

The pre-match tears from the likes of Aaron Smith, Beauden Barrett and Dane Coles told you how much doing their country, and the All Blacks name, proud meant. New Zealand were not going to lose without one hell of a fight. Neither was Tadhg Beirne.

Irish supporters used to having their hearts broken in 2013, 2012, 2006 [you can go back as far as you like] must have fretted when Will Jordan's try turned a 19-point deficit to just the three, with a Jordie Barrett conversion on the way.

END_OF_DOCUMENT_TOKEN_TO_BE_REPLACED

That was as close as it would get. Barrett missed his kick, Rob Herring scored a brilliant try. And Tadhg Beirne, for five mad minutes, went to another realm.

Before we go too deep into the clips and analysis, some house-keeping to show you the sort of impact the Eadestown native had.

Five carries for 21 metres gained, with one clean break. In defence, he claimed one lineout, stole one from New Zealand, made an intercept on the halfway line, 16 tackles [out of 17 attempted] and made three breakdown turnovers, all inside the Irish 22.

The lineout steal came in the first half, as he jumped up and swatted a Codie Taylor throw back towards Jamison Gibson-Park. James Ryan had a lineout steal, too, as the All Blacks struggled to get clean ball for launch plays, while often letting Ireland get into the air without much opposition.

Beirne was also part of the rolling maul that set up the crash-over try for Josh van der Flier and that planted the New Zealand pack to set up the scrum set-play that got Robbie Henshaw over for Ireland's third try. 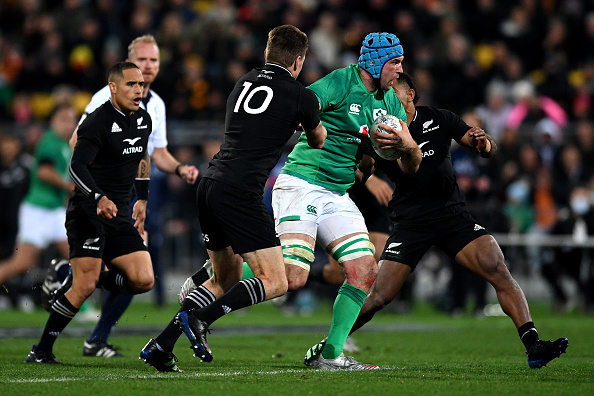 Tadhg Beirne charges forward against the All Blacks, at Sky Stadium in Wellington. (Photo by Joe Allison/Getty Images)
Advertisement

Tadhg Beirne, a second half sensation

END_OF_DOCUMENT_TOKEN_TO_BE_REPLACED

Andy Farrell called the first 40 minutes the best half he had seen from his Irish side all year. Beirne was big part of that, but he would somehow up his input in the second half. He was sensational.

With the All Blacks feeling like a comeback could be on the cards, after Ardie Savea's try, there was a launch off a Taylor lineout. Ireland had allowed Sam Whitelock to jump unopposed as they set for a rolling maul. New Zealand spread the ball right and wide.

When Aaron Smith cut back inside, attempting to skip Whitelock and connect with Nepo Laulala, Beirne read the play, pouched the ball and was away.

Aaron Smith ability to rapidly skip the first ball-carrier option, and find second and third runners, had caused Ireland trouble in the First Test. That was negated in the Second Test and this Beirne read shows Ireland were completely alive to that threat.

The yellow card to Andrew Porter cost Ireland dearly. Johnny Sexton kicked a penalty, during his 10 minutes in the sin-bin, but the All Blacks racked up 12 points [converted Akira Ioane try and a Will Jordan try].

Beirne's first breakdown turnover of the game arrived on 57 minutes, when he was illegally cleared out after latching onto ruck ball. It gave Sexton a penalty from the halfway line. Sexton almost had it, but the ball struck the crossbar, both Barretts did well and Will Jordan ran in a try from 75 metres out. The score was 25-22 when Porter returned to the field.

Beirne was one of the lifters as James Ryan claimed a lineout, on 65 minutes, then fed the ball back to Rob Herring, who crashed over off the back of that rolling maul. Sexton's conversion made it 32-22 but New Zealand were now playing in fifth gear and going for broke.

It was time for Tadhg Beirne to step up and wreck their buzz.

The All Blacks had a penalty coming their way, after a smart Will Jordan carry up the right. They opted for a scrum to the right of the Irish posts, rather than going for the kick.

It was a tactic that work in the First Test, but Caelan Doris was alive to it, thanks to the Ireland front row being solid. Doris pounced on Ardie Savea and the flanker was driven back. The ball popped up to Folau Fakatava, who was tackled by Johnny Sexton and Robbie Henshaw.

Tadhg Beirne dipped in for a poach on Akira Ioane, the next carrier, and got neck-rolled by Whitelock. Ireland penalty and a chance to clear their lines.

Ireland's clearing kick brought them a lineout they were then penalised at for a Rob Herring throw that was not straight.

Beauden Barrett made the most ground, over on the left wing, then play came back to the right. Will Jordan got the ball with space to run into and opted to make a dart for the line, ignoring Dalton Papalii on the far touchline.

Conor Murray tackled Jordan low, Herring helped stop him in his tracks and Beirne was in over the ball again. It was scrambled back for Murray to find Lowe for another clearing kick. The Kiwi commentators - Grant Nesbitt and Ian Smith - were astounded:

Ireland were struggling to get out of their 22, let alone their half. On and on the All Blacks came, with Beauden Barrett and Akira Ioane making carries for decent gains.

Tadhg Beirne went in for a first nibble at ball-carrier Ardie Savea but rolled away when the No.8 was brought to ground. Perhaps more concerned with keeping width on both sides of the ball, the Kiwis did not aggressively go in over the ball. Whitelock was in there, but so was Dane Coles.

Beirne stepped back, assessed his options and counter-rucked. Coles was knocked back and the hooker fell back on Folau Fakatava. "Knocked back," declared Wayne Barnes. Cian Healy dived on the ball and it was fed back to Sexton to clear. The Sky Sport commentators were in awe.

With THREE turnovers won for his side, inside his own 22, in less than five minutes - to add to his intercept and lineout steal - that was Tadhg Beirne's final act. Himself and Sexton were brought off with the clock on 75:48.

"Tadhg Beirne is going off," noted Smith, "and he should get a reasonable ovation."

"What a game from the big man from Munster," said Nesbitt.

It was a game for the ages for Beirne, and he more than earned the rousing reception he received as he left the field of play with the battle all but won.

For a guy that was thinking of packing in rugby as recently as six years ago, it was an incredible performance on a night, and a tour, to remember.


popular
Ireland team to play Wales: Andy Farrell's XV, the big calls and bold cuts
Ireland's self destructive mentality kills Croke Park fight for Katie Taylor
Roy Keane reminds everyone of his feelings towards Newcastle United ahead of cup final against Man United
Everton release brutal 59-word statement to confirm Anthony Gordon departure
Even Roy Keane felt Michael Dawson went too far with his remark to Tom Heaton
Five confirmed changes and guidelines to have big impact on 2023 Six Nations
Owen Farrell praises Johnny Sexton in revealing interview ahead of Six Nations
You may also like
14 hours ago
Ireland's self destructive mentality kills Croke Park fight for Katie Taylor
2 days ago
"I've heard people tipping Wales to beat us. I was actually offended!" - Greg O'Shea
2 days ago
"It's crazy to think Bundee Aki might come straight in and start against Wales"
4 days ago
Two Ireland stars included in Premier League's 'young English XI'
4 days ago
British publication urges Gareth Southgate to claim Evan Ferguson for England
1 week ago
The two toughest calls in Ireland team to face Wales are in the backline
Next Page