Reports suggest the German F1 legend is unable to speak

One year on from a devastating ski-accident that left him in a coma for months and there is still little positive news to report on Michael Schumacher.

The former Ferrari driver suffered a massive brain injury after a skiing accident on December 29th 2013 when holidaying with his family and was in an induced coma for months.

He emerged from the coma in June and eventually left hospital in September to be cared for at home, but there has been very little information on his progress since.

It was reported over the weekend that he was beginning to recognise his family but his manager, Sabine Kehm, has dismissed the reports.

Philippe Streiff, a former F1 driver,who is in a wheelchair himself after an accident in 1989, told a French newspaper that Schumacher was beginning to show signs of recognising those around him but was still unable to walk.

However Kehm has denied that story telling Reuters, 'We need a long time. It’s going to be a long time and a hard fight. He is making progress appropriate to the severity of the situation.'

His family have made very little public comment on his condition since last year with doubts over whether the man regarded as one of the greatest drivers of all-time will ever truly recover.

Twitter is rallying around the stricken F1 legend today with the hashtag #KeepFightingMichael trending worldwide.

Here's just some of the best of the messages for the 45 year-old:

One year on. Our thoughts are still very much with Michael Schumacher and his family. #KeepFightingMichael pic.twitter.com/vbjLTvBFzn

1 year now #KeepFightingMichael , but also thinking of you Jules #ForzaJules

It has been one year already... #KeepFightingMichael our thougts are still with you and your family pic.twitter.com/j6qJxa3QZg

#KeepFightingMichael , I know you will.. 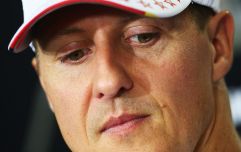 END_OF_DOCUMENT_TOKEN_TO_BE_REPLACED

On the day of the anniversary of Schumacher's crash the news about Jules Bianchi is also scarce.

The Frenchman is now out of an artificial coma after an horrific accident at the Japanese Grand Prix but there has been no update in a number of weeks.

He suffered a diffuse axonal injury  when he crashed into a tractor   recovering another car which had spun off .

He is believed to e breathing on his own but experts don not feel he will ever make a full recovery.

H/T to The Guardian