Michael Schumacher is showing "encouraging signs" in his recovery from his skiing accident, a former Ferrari colleague and friend has said.

The German racing driver, 47, was put into a coma after he suffered severe head injuries while skiing in the Alpine resort of Meribel in December 2013.

He was later moved from hospital to the family home on the shores of Lake Geneva where he is continuing his recovery.

His family have decided not to release details about his condition, but Ross Brawn, who was Schumacher's technical director at Benetton and Ferrari and oversaw all seven of his Formula 1 World Championship titles, says the German is making progress.

"The family have chosen to conduct Michael's convalescence in private and I must respect that," Brawn told the BBC.

"There are encouraging signs and we are all praying every day that we see more of them. So it is difficult for me to say very much and respect the family's privacy. 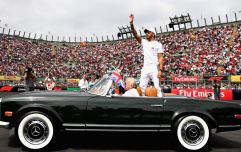 END_OF_DOCUMENT_TOKEN_TO_BE_REPLACED

"All I would say is there is a lot of speculation about Michael's condition.

"Most of it's wrong and we just pray and hope every day that we continue to see some progress and that one day we can see Michael out and about and recovered from his terrible injuries."

Schumacher is the most successful driver in the history of Formula 1 with seven world championship titles and 91 wins under his belt. Brawn masterminded every single one of them in his role as technical chief at the Benetton and Ferrari teams, before they worked together again at Mercedes after Schumacher came out of retirement.