Just three races into the Formula One season and the simmering tensions between world champion Lewis Hamilton and team-mate Nico Rosberg have burst back to the surface.

After feuding for much of 2014, when Hamilton pipped Rosberg to the world title, both had insisted that they would be able to co-exist this season, but the early returns make that look unlikely.

The Mercedes pair secured a one-two finish at the Chinese Grand Prix, but the German was irate after the race, accusing Hamilton of deliberately slowing him down and jeopardising his attempts to hold off Ferrari's Sebastian Vettel for second place.

As the duo sat together for the post-race press conference, Rosberg claimed the Englishman was guilty of "unnecessarily compromising my race".

Hamilton, who claimed his second win of the campaign, had been describing how he felt he controlled the race from the front, when Rosberg retorted:

It’s interesting to hear from you Lewis that you were just thinking about yourself with the pace. Unnecessarily that was compromising my race, because driving slower than was maybe necessary at the beginning of stints meant that Sebastian was very close to me and that opening up the opportunity for Sebastian to try that early pit stop, to try and jump me. I was unnecessarily close to Sebastian as a result and it cost me race time as a result 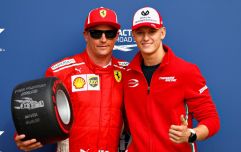 END_OF_DOCUMENT_TOKEN_TO_BE_REPLACED

Hamilton responded by saying: "It’s not my job to look after Nico’s race. My job is to manage to car and bring the car home as fast as possible and that’s what I did. I didn’t do anything intentionally to slow the cars up.”

Both men indicated that the issue would be discussed further at the team's next meeting, with Mercedes team boss Toto Wolff adding: 'We need to be careful half an hour after the race to be pointing fingers at anyone. It was a difficult situation, [Lewis] needed to manage the pace and that put Nico into a difficult situation.'