Throughout the entirety of UFC 222, Nate Diaz only sent out one tweet.

We don't know how much of UFC 222 Nate Diaz watched, but there was one fight he caught. Or, at the very least, he managed to see its conclusion.

Sean O'Malley landed nearly twice as many strikes as his opponent Andre Soukhamthath. He pieced him up for over 10 minutes with two of the three judges awarding him a 10-8 first round. Although he lost round three, the momentum changed after he suffered a foot injury that rendered him unable to stand. Soukhamthath foolishly followed him down to the ground allowing O'Malley to survive until the final buzzer.

His foot was so beat up after the fight, he had to give his victory interview with Joe Rogan while lying prone on his back. 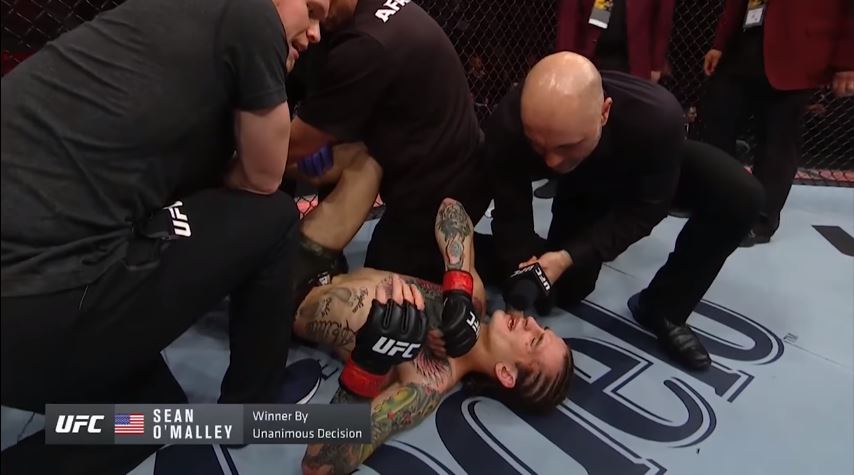 END_OF_DOCUMENT_TOKEN_TO_BE_REPLACED

Pretty much everyone watching the fight, bar Soukhamthath's loved ones, scored the fight in favour of 23-year-old O'Malley. His work in the first two rounds meant that his adversary required a finish to get his hand raised. The finish probably would have come had Soukhamthath remained on his feet, but his baffling tactics meant he lost the unanimous decision.

Diaz, who would be the first to hold his hand up and say the current scoring system in MMA is motherfuckin' bullshit, didn't agree with the judges' decision.

How u win if u can't walk out the cage ? Smh

Then, radio silence. That was the only UFC 222-related tweet Diaz sent during the event.

O'Malley took the criticism in his stride though. As he explained on Monday's MMA Hour, he got a lot of enjoyment out of the weird situation.

"I just pictured Nate sitting behind his phone pissed off tweeting that at me. It's funny. I don't see where the hate comes from. It's all good. I couldn't care less one way or the other."

Nates one of my favorite fighters all time