"He hits... not hard at all. He's one of the softest hitters I've ever been in front of. Period."

On Saturday night in Jacksonville, Florida, Kamaru Usman came as close as one is likely to see to making someone eat their own words.

The UFC welterweight champion had previously defeated Jorge Masvidal but that bout had come at short notice and there was always going to be a rematch. With a full camp behind him, Masvidal claimed he was going to wipe the grin off Usman's face in the pay-per-view main event.

The first round saw Usman score a takedown and Masvidal connect with a knee strike. The champion also cracked Masvidal with two clean right-handers, but got a smile in response to both. Perhaps Usman did not have knock-out power after all... 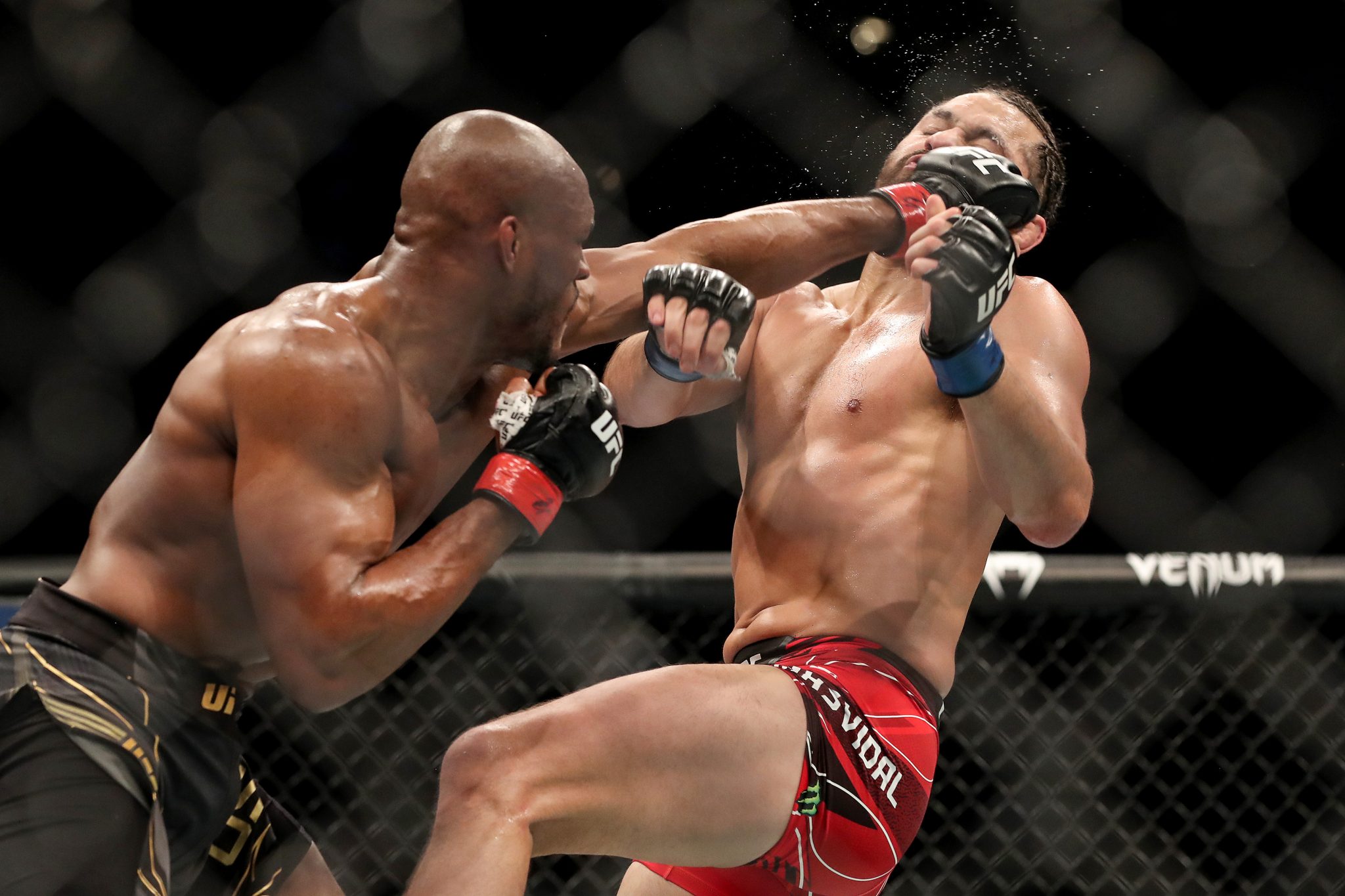 END_OF_DOCUMENT_TOKEN_TO_BE_REPLACED

Such thoughts would have been instantly dismissed about a minute into round two. After both men felt each other out, they stood in the centre of The Octagon and sought an opening.

Usman found it by feigning with his left and connecting with an absolutely devastating right-hand that annihilated Masvidal.

The 'BMF' belt-holder dropped in an instant and Usman had time only to deliver some exclamation point hammer fists before referee Herb Dean stepped in:

Following his latest title defence victory, Usman opted not to run back Masvidal's dismissive words of his power. Instead, he was respectful of his defeated foe.

"Thank you to my man, Jorge. You elevated me," he said. "It's been a while since I’ve been extremely nervous for fights. He elevated me. He made me go to the workshop. I had to sharpen all my tools. I had to come out here and put on a performance like that.

"I told everybody I’m still getting better. The sky’s the limit for me as long as I’m doing this." 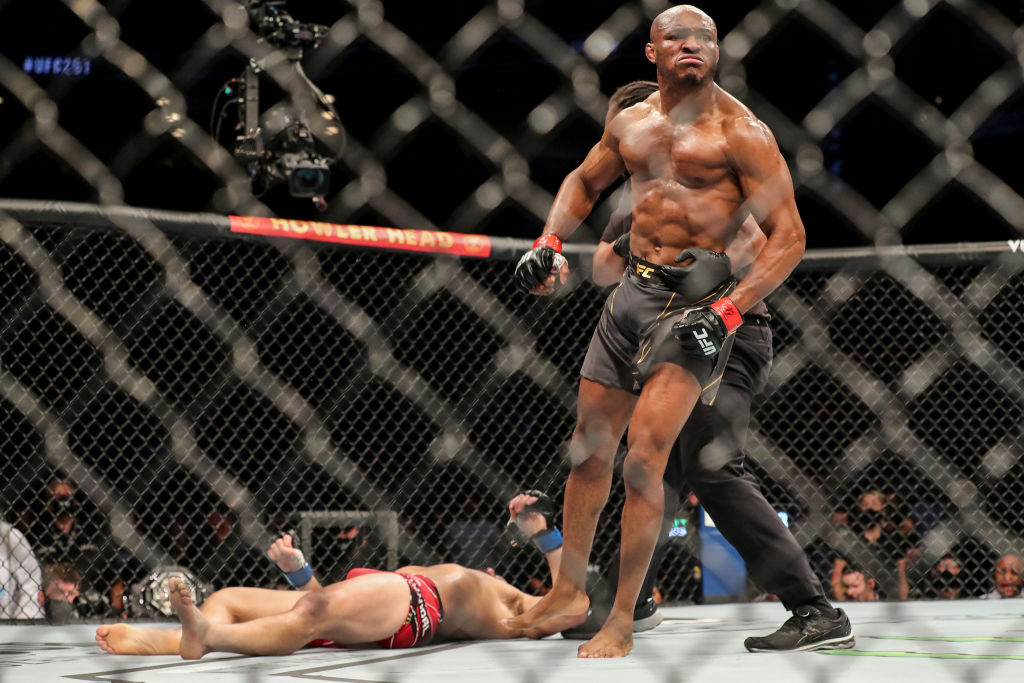 As for Masvidal, he was able to share a few thoughts on his loss after collecting himself.

"It hurts. I've never been knocked out in 50 pro fights. Usman showed me something he didn’t show me the first fight. I didn’t feel his power and that’s what happens when you’re overconfident.

"All the props to him in the world. He caught me by surprise. He’s got my number. Nothing I can say, he won this fair and square." 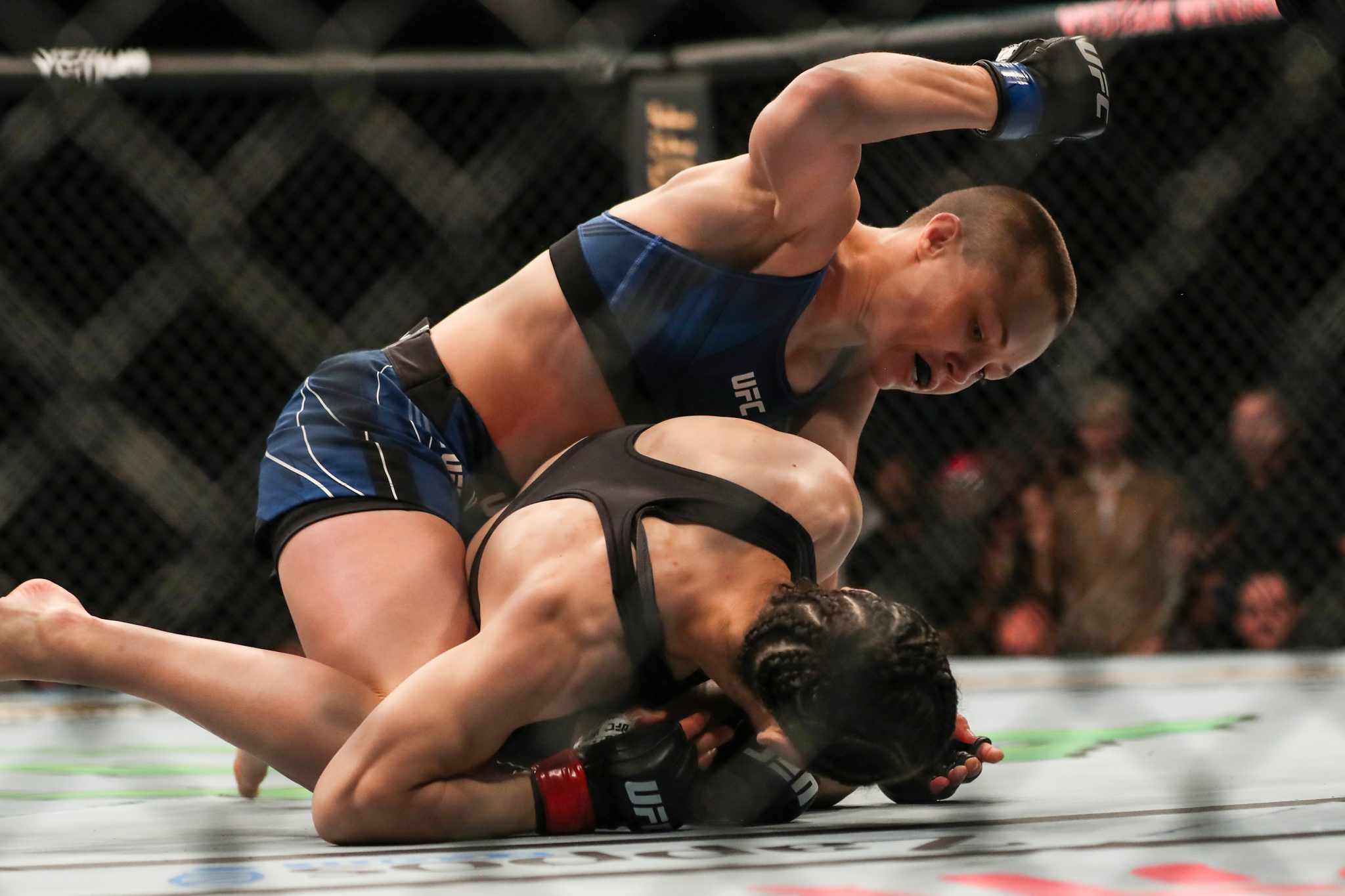 There were two other title fights on the UFC 261 card, with two more devastating finishes to kept the crowd rapt.

Rose Namajunas regained the UFC straw-weight crown she lost in 2019 by stunning the champion Zhang Weili. Namajunas shot to fame in 2017 by stunning then-champion Joanna Jędrzejczyk to take the belt and then, less than six months later, defending it against the Polish fighter.

Jessica Andrade defeated her for that belt in May 2019 but Namajunas avenged that defeat, last July, to tee up this tilt with Weili. It was a much-anticipated bout, but it lasted only 78 seconds. Namajunas delivered a brutal head-kick that drop the champion and finished her off with a few hammer fists for good measure.

"I did it again," she declared. "I am the best. I didn’t see her moving. I wasn’t sure she was going to come back from that."

Shevchenko was able to ragdoll Andrade in the first round and she put herself into a dominant position in the next, before unleashing relentless elbows and punches to the Brazilian to force a stoppage and claim a TKO win.

Elsewhere on the main card, a doctor's stoppage saw Anthony Smith defeat Jimmy Crute while Uriah Hall was the winner over the unfortunate Chris Weidman, who broke his leg whilst delivering a strike on Hall.


popular
Jurgen Klopp reacted like everyone else to Darwin Nunez headbutt red card
Jamie Carragher on the two Man United players Erik ten Hag can't trust
"I went up to the Italians and gave them a big auld shoulder" - Paul O'Donovan does it again
Carragher and Neville brutally name Man United's biggest transfer flops since 2013
Man United have 'decided to sell' promising midfielder James Garner
Wexford Under-20 lights it up as Ferns win their first ever county title
Graeme Souness under fire for calling football a ‘man’s game' while sat with Karen Carney
You may also like
1 month ago
Jorge Masvidal speaks about defending BMF title against Conor McGregor
2 months ago
Dana White reveals who Conor McGregor could fight on UFC return
2 months ago
Your guide to a great weekend of sport and how to stream it all
2 months ago
Conor McGregor says he knows his next UFC opponent and fight date
3 months ago
Commentating cage-side, Daniel Cormier missed the UFC knock-out of the year
3 months ago
Conor McGregor responds to Michael Chandler's callout after UFC 274
Next Page