There are many ways to pick your horse for the Aintree Grand National.

You could heed the advice of a racing enthusiast, you could match each horse to a celebrity or you can stick a pin in the form guide - as millions of us will do Saturday morning.

But, nobody likes to make an uninformed choice (that is what the office sweepstake is for), so we instead go with our favourite jockey, a famous owner or a good name.

Hayley O'Connor of Ladbrokes took the card for the most famous steeplechase in the world to the Liberties to canvass the opinion of some street traders. 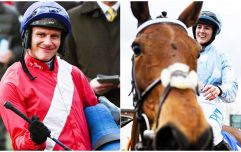 END_OF_DOCUMENT_TOKEN_TO_BE_REPLACED

All manner of factors were considered when picking from the 40 runners - we had Tom Cruise's likeability, Michael O'Leary's truthfulness, dance routine, superstitions and even divine inspiration.

We also learned what one trader would do for €10,000. Not only would he jump one of the fences at the National but, he'd "jump over the Great Wall of China for 10 grand!"

Watch the video below before sticking your pin.

popular
Sean Dyche set to be named Everton manager after Marcelo Bielsa talks break down
Roy Keane flatly rejects longstanding perception of ex-Man United midfielder Paul Ince
Allianz National Football League Round 1: All the action and talking points
Roy Keane leaves ITV pundits in stitches after Pep Guardiola's pre-match interview
Conor McGregor hit by car ‘at full speed’ while cycling
Quiz: Identify these 15 football clubs that are not named after a place
Study shows rugby positions you are most/least likely to be injured playing
You may also like
1 week ago
The SportsJOE Friday Pub Quiz: Week 7
2 weeks ago
The best five-team accumulator special as the Premier League picks up steam
1 month ago
The five biggest talking points ahead of the Premier League's return
1 month ago
The five best bets for Aston Villa vs Liverpool on St Stephen's Day
1 month ago
The best St Stephen's Day special five-team accumulator as the Premier League returns
1 month ago
Five most memorable moments of the 2022 World Cup
Next Page