Ruby's knockers are talking through holes in their pockets

The encounter between Ruby Walsh and a Twitter troll was probably a set-up, but it did make a very important point.

Ever since he fell off Annie Power in the mares' hurdle in Cheltenham in 2015, Ruby Walsh's falls and his defeats have been greeted with a dim, depressing chorus from a dim and depressing bunch.

END_OF_DOCUMENT_TOKEN_TO_BE_REPLACED

Talking through the holes in their pockets, the frustration of losing €20 drives them a step further than criticising Ruby for a mistake or a misjudgement and instead of accepting that they chose the wrong horse or that the horses do actually fall sometimes and that humans make mistakes, this bitter bunch look for somebody else to blame even though they have a right to feel cheated by nothing other than the game.

Like a lad who's spilled milk on the floor but blames it on the the carton. 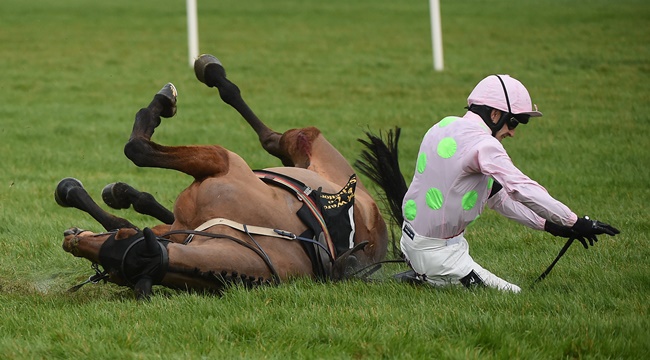 So, in March 2017, one of the many keyboard warriors slaughtering Ruby was doorstepped by a revved up 'Crook from Kildare' and brought on a journey in the back of a jeep.

The jeep took a while to get going but when it reached 40 miles an hour, Ruby felt like he does on a daily basis and the critic felt like you would before a sky jump.

END_OF_DOCUMENT_TOKEN_TO_BE_REPLACED

In the year and a half that's followed, Ruby has spent half of it on the sidelines with a broken leg sustained from a fall and he's spent the other half either winning or losing races.

And that's the life of a jockey.

When Ruby's winning and it's more often than not he is, he's the best timekeeper in the world, he's the master horseman and there's nobody better in the game.

When Ruby loses, it's a different story though.

He definitely had an ulterior motive and chose to fall or else he didn't give the horse a fair crack at it because that would benefit him for some reason they know all about.

END_OF_DOCUMENT_TOKEN_TO_BE_REPLACED

And that was the story again this week in Leopardstown. Ruby rode two winners, the same number as Barry Geraghty and Paul Townend but more pressing than the victories aboard Castlebawn West and Aramon were the losses.

We had a feel-good story during the week about Ruby and Faugheen getting back to their feet after their horrific fall at the second last in the Christmas hurdle but most of the comments were derogatory ones.

Take your pick, they read as follows:

A search of his name on Twitter will give you more of an idea.

All of these trolls are conveniently forgetting that horse racing is the only sport where two ambulances follow the riders around the track and Ruby knows that more than most, having broken almost every bone in his body at this stage. He's not doing it for my or for your entertainment, he's doing because it's his job and he's doing it for the love of it.

Ruby Walsh is nearing 40 now, there's a solid chance he's not as lethal as he was ten years ago but he's still the best jockey horse racing has ever seen and he still deserves respect for that.


popular
Solskjaer gamble on Harry Maguire backfires in most horrendous way
José Mourinho swaps Conor McGregor a Roma jersey for some whiskey
WATCH: Munster fans in Paris pay tribute to Anthony Foley with spine-tingling Fields of Athenry rendition
"Come on, who is better than Mo Salah at the moment?" - Jurgen Klopp
"I'll go back running the roads now and make sure my body doesn't get lazy"
Alex Ferguson wrote Mickey Harte a letter - ex Tyrone boss reveals in new memoir
GAA at its best as Bellaghy players run into team-mate who buried his father that morning
You may also like
7 months ago
"One in every three runners at the Cheltenham Festival is an ex-Irish Pointer" - Richard Pugh
7 months ago
"I feel it is important to provide people with some context surrounding this photo."
10 months ago
Road to glory begins here for gems of the National Hunt game
11 months ago
"I can't wait to see Jason in the Morgiana, it's a dream come true" - owner Peter Michael
11 months ago
10 horses to follow for the 2020/21 national hunt season
1 year ago
Fines and suspensions in Tipperary after stewards enquiry
Next Page