Irish race meetings will go ahead on Thursday despite the cancellation of a number of events in Britain following an outbreak of equine flu.

It emerged late on Wednesday night that three National Hunt meetings at Doncaster, Huntingdon and Ffos Las - as well as the all-weather Flat card at Chelmsford - had been called off after the British Horseracing Authority was informed of "three confirmed Equine Influenza positives from vaccinated horses in an active racing yard."

Horses from the unnamed yard raced at Ludlow and Ayr on Wednesday, which potentially put other competing horses at risk of infection.

Horse Racing Ireland and the Irish Horseracing Regulatory Board did not release a statement on the matter until Thursday morning but when they did, they confirmed that "horses will continue to be able to race across the north/south of the island of Ireland."

EQUINE INFLUENZA UPDATE - The IHRB and HRI confirm that racing will continue in Ireland at present and that runners from Britain will not be permitted to race in Ireland until further notice. The full update is here... https://t.co/Zq4Ibnexxy pic.twitter.com/fYQurKWpOS 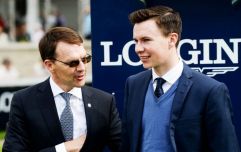 "If we need advice or someone to bounce an idea off, we’re only ever a phone call away"

END_OF_DOCUMENT_TOKEN_TO_BE_REPLACED

A statement read: "Following the British Horseracing Authority’s announcement that racing is suspended in Britain because of equine influenza and consultation with the IHRB Board, Veterinary Committee, Irish Equine Centre and HRI overnight, the IHRB confirm these decisions in the context that at present within Ireland the disease risk status in racing Thoroughbreds has not yet changed."

Racing in Thurles is expected to get underway at 1.15pm, with seven races scheduled.

The statement continued: "As an interim precaution, the IHRB and HRI have decided that runners from Britain will not be permitted to run in Ireland in an effort to reduce the risk of further spread of the disease via horse movement."

popular
The SportsJOE 12 o'clock quiz | Day 76
The SportsJOE 12 o'clock quiz | Day 75
SportsJOE 2000s Football Quiz | Round 4
Cristiano Ronaldo and Ronda Rousey among top 20 most charitable athletes in the world
Sadio Mane 'agreed terms with Real Madrid' before Zinedine Zidane's departure
Joe Rogan reveals the diet and training plan that keeps him so shredded
Dustin Johnson says cocaine was not the reason for his break from golf
You may also like
1 year ago
Timing of the Galway and Clare replay could spell disaster for the GAA
1 year ago
Grand National under review after three horses die during this year's meeting
1 year ago
Michael O'Leary celebrates Tiger Roll win with free drinks offer on flight back to Dublin
1 year ago
Davy Russell dedicates Grand National win to Cork footballer with rare form of cancer
1 year ago
Tiger Roll makes punters' day with back-to-back Grand National victories
1 year ago
Which horse should you back in the Aintree Grand National? Take the test to find out
Next Page