"He's alright but he just didn't feel right and the best thing to do then is give up, isn't it?"

The Kildare pilot has had many memorable days in the saddle with Willie Mullins' majestic 11-year-old, but Thursday wasn't one of those and the fear is now that we may have seen the last of him on a racecourse.

Only a couple of jumps in and with the field heading down the back straight in the Aintree hurdle, the machine came under pressure and after pushing him on for a couple of strides, Ruby opted to pull him up.

"He just wasn't going Alice," said Ruby to ITV afterwards. "He jumped alright over the first but by the time we faced down the bottom, he was lifeless. Really backed off the third last, Melon and Buveur D'Air were running over me, he just didn't feel right.

"He's sound, he's alright but he just didn't feel right and the best thing to do then is to give up, isn't it?

Ruby Walsh update on Faugheen via @itvracing
"He jumped the first alright but by the time we faced down the bottom, he was lifeless.

"He's sound, he's alright but he just didn't feel right and the best thing to do then is to give up, isn't it?"pic.twitter.com/GzyXo6luQG

Credit where credit is due to Walsh, who aware that his mount wasn't on top form, took the cautious decision of pulling him out in case of injury or stress.

"He's sound. He's fine. But he just didn't feel right. The safest thing to do is give up."@Ruby_Walsh on Faugheen. 🐎#Aintree #GrandNationalFestival pic.twitter.com/k74Fx82kEB

Another Irish horse went onto win the race in Jessica Harrington's Supasundae, the sprightly stayer slogging it out under Robbie Power to hold off Buveur D'Air up the run in. 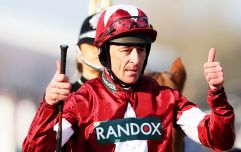 Which horse should you back in the Aintree Grand National? Take the test to find out

END_OF_DOCUMENT_TOKEN_TO_BE_REPLACED

Ever since suffering a ligament injury in the build-up to the 2016 champion hurdle, Faugheen has been more hit and miss than irresistible - only winning two of his eight starts since returning - and a non-finish in the 2019 Aintree hurdle may spell the end of the road.

The horse racing world thanked one of the game's most electrifying with the horse now expected to retire.

One of the greats; shame injury curtailed his career. At his best he was electric to watch #Faugheen https://t.co/6tkTev7yhj


popular
The SportsJOE 12 o'clock quiz | Day 104
James Haskell on text exchange with Peter O'Mahony after Ireland's victory over Scotland
"Shane was just gifted. He could play centre back, centre forward, he had everything"
David Beckham recalls how a trip to Ireland got him in trouble with Alex Ferguson
Maximum prison sentence now facing Conor McGregor is 11 years
SPOILER: Conor McGregor receives very commendable ranking in official top 200 UFC fighters list
"I have more work done than any player in Ireland" - The Trevor Giles tribute show
You may also like
2 years ago
Animal rights group PETA call for ITV to stop broadcasting the Grand National
2 years ago
Irish still fare well on Aintree opening day despite Mullins and Elliott no show
4 years ago
The 5 questions we all want answered from this weekend's racing
5 years ago
Video: Incredibly tense POV footage shows Irish jockey fall at Aintree
1 year ago
"I'm there since I was 16 when he offered me a job...there isn't a loyaler man in training"
1 year ago
COMPETITION: Win 5 tickets to the Fairyhouse Easter Festival
Next Page