Just two days of pleasantries to get through.

Just two days of pretending that these are the festivities you've been waiting all year for.

END_OF_DOCUMENT_TOKEN_TO_BE_REPLACED

It's not going to be easy and nobody said it would be. Find yourself drifting in and out of conversation after conversation, as your mind trails off to a fantasy world that you suddenly realise is only a day, half a day away.

Christmas eve and Christmas day are great. But you must remember that this is only the pre-amble. The real festivities begin on St Stephen's day and thereafter, when a full round of Premier League fixtures kick-off in conjunction with the return of the darts but most importantly of all, a time when the white flag is raised and 'ttttthey're off.'

Christmas brings with it a feast of horse racing from this side and the other side of the pond and December 26 marks the beginning of it all.

The racing is hot, the competition is heavy. You'd better get yourself ready. Here are the best duels, the mouth-watering showdowns that lie in store on the hallowed grounds of Foxrock, Kempton and further beyond.

St Stephen's day is the day. Three duels in 45 minutes whet the appetite.

All of the below takes place in the space 45 enthralling minutes.

Strap yourselves in for a proverbial thriller. Fakir and Laurina can barely be separated in the betting for the first Grade One of the festival, and this has all the ingredients for an absolute belter.

Joseph O'Brien's devilish four-year-old jumped like a stag when beating Samcro last time out but Laurina is still a bit of a quantity unknown in these surrounds.

What a way to start it all off.

A who's who of Nicky Henderson's talented yard.

Fusil Raffles missed Cheltenham last year, but returned to win impressively on Punchestown soil in early May. Beat the highly rated Fakir D'oudaries that day, and got this season off the mark with a win over Grand Sancy in Wincanton. 15/8 favourite for a reason here, but Epatante and Verdana Blue - the respective second and third string of the Henderson yard - are expected to go well.

Two gems of horses, who have had roundabout runs in recent times. Both are showing signs of a return to form now and this showdown is one of the most eagerly anticipated of Christmas week. 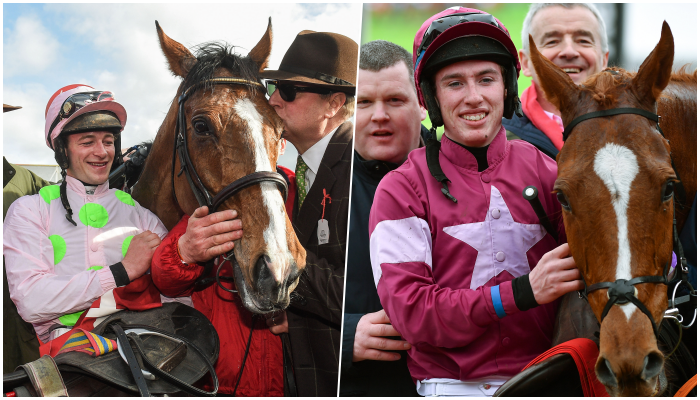 He's one of the big boys in the chasing game now, but he's up against a top table mainstay. Lostintranslation has proved himself time and time again and the three mile trip should be no problem. 7/4 represents decent value.

Footpad however, may be more than a footnote in this race. Whooped Mala Beach by ten lengths in Thurles last time in an impressive showing. Will need to improve, but the increasing trip might just be the tonic for Footpad.

Bring on the magic.


popular
When Liam Brady lit into Brian Clough for his dismissive Mick McCarthy comments
Roy Keane pays Declan Rice highest compliment possible as United move discussed
Galway fans' frosty reception for Davy Fitz doesn't make any sense
"I'm pretty angry... Kane's body language and performance, oh my goodness!"
Roy Keane and Graeme Souness had plenty to say about David Moyes' crucial penalty decision
Solskjaer makes fair point as Ronaldo denied two 'stonewall penalties' at West Ham
Phil Jones fires back at "really poor" Rio Ferdinand comments
You may also like
6 months ago
"One in every three runners at the Cheltenham Festival is an ex-Irish Pointer" - Richard Pugh
6 months ago
"I feel it is important to provide people with some context surrounding this photo."
9 months ago
Road to glory begins here for gems of the National Hunt game
10 months ago
"I can't wait to see Jason in the Morgiana, it's a dream come true" - owner Peter Michael
10 months ago
10 horses to follow for the 2020/21 national hunt season
1 year ago
Fines and suspensions in Tipperary after stewards enquiry
Next Page