You just have to love Padraig Harrington's laid-back anniversary lunch

You can't beat burger and chips.

With a reported net worth of over €30 million, you would excuse Padraig Harrington for spending lavishly. When it comes to celebrating his anniversary, however, the three-time major winner prefers to strip it all back and go for the simple things.

Harrington and his wife, Caroline, celebrated their 20th anniversary on Wednesday. They obviously marked the occasion with a meal, but did they treat themselves to some five-star spa treatment? Or how about a week's break somewhere sunny?

Nah, why go to all that bother when Bunsen Burger is just down the road? 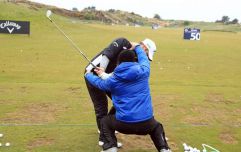 Golf for beginners - three tips to rescue a rookie player

END_OF_DOCUMENT_TOKEN_TO_BE_REPLACED

The 46-year-old is currently enjoying some deserved downtime after another hectic year on tour. Although the two-time Open champion will want to forget about 10 missed cuts this season, he did rediscover his form towards the end of the campaign, with a fourth-placed finish in the Turkish Airlines Open in November.

Harrington is hoping to use that encouraging showing as a springboard in his bid to make next year's Ryder Cup team. He will be 47 by the time the bi-annual showpiece rolls around next September and, although he hasn't made the European team since 2010, he feels as though he can be an asset for captain Thomas Bjorn.

With Harrington determined to play his way into Bjorn's thoughts, and Paul Dunne and Shane Lowry expected to be in contention, the Ryder Cup could have a very strong Irish contingent next year. Let's hope it pans out.


popular
The SportsJOE 12 o'clock quiz | Day 104
James Haskell on text exchange with Peter O'Mahony after Ireland's victory over Scotland
"Shane was just gifted. He could play centre back, centre forward, he had everything"
David Beckham recalls how a trip to Ireland got him in trouble with Alex Ferguson
The SportsJOE 12 o'clock quiz | Day 103
"The academy boys have turned into small monsters over the past few weeks" - Peter O'Mahony
"I have more work done than any player in Ireland" - The Trevor Giles tribute show
You may also like
11 months ago
Brooks Koepka brushes Rory McIlroy aside in WGC showdown and bags $3.75m
11 months ago
Shane Lowry receives standing ovation at Croke Park
11 months ago
Jordan Spieth and Rickie Fowler back Open return to Portrush
11 months ago
Major Olympics boost for Shane Lowry as he enters Top 10
11 months ago
"There is no coming back for Rory McIlroy"
11 months ago
'Little fat kid with the glasses' and one of golf's best predictions
Next Page