WATCH: It's hard to believe where this Brooks Koepka drive landed on day two of the Ryder Cup

No, this isn't an outtake from a Happy Gilmore sequel.

This is just an almost unfathomable quirk of fate that came about when the golf Gods fancied a chuckle as they watched over the 41st Ryder Cup.

On day two Brooks Koepka, Dustin Johnson, Rory McIlroy and Thomas Pieters were the cast of an unbelievable scene that played out when Koepka's drive on the par-5 fourth didn't quite find its desired destination.

Instead, it bounced once and plopped right between the neck and backpack of Pieters' father who was quickly thrust into a spotlight that we're not sure he felt altogether comfortable in.

Mr Pieters didn't know what to do but was firmly told to stay still and Koepka obviously got a free drop.

Here is the close-up of the unbelievable landing spot. 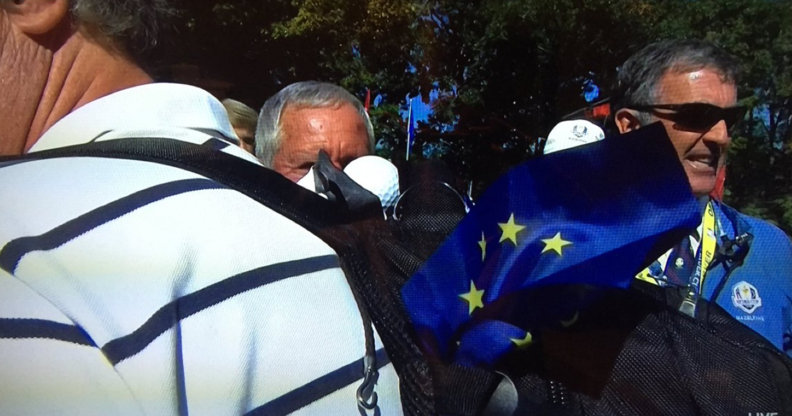 END_OF_DOCUMENT_TOKEN_TO_BE_REPLACED

And you thought your parents embarrassed you when they visited you at work.

Earlier that morning, Sergio Garcia's tee shot landed amazingly in the pocket of a marshal on course.

Only at the Ryder Cup, folks.

popular
The SportsJOE 12 o'clock quiz | Day 142
SportsJOE 2000s Football Quiz | Round 12
Only a Champions League fanatic would get full marks in this quiz
Rory McIlroy defends Dustin Johnson after Brooks Koepka comments
Brooks Koepka puts PGA Championship leaders on notice with final round comments
Collin Morikawa makes huge world rankings leap as Lowry drops back
United through but impenetrable goalkeeper has everyone enquiring
You may also like
1 year ago
Shane Lowry victory speech after €1,000,000 victory shows where his head's at
1 year ago
Padraig Harrington very honest about biggest Ryder Cup captaincy risk
1 year ago
Team USA texts after Ryder Cup suggest all may not be what it seems
1 year ago
Ryder Cup spectator "loses eyesight" after a wayward tee shot
1 year ago
Two American golfers reportedly "had to be separated" following Ryder Cup defeat
1 year ago
Final Ryder Cup player ratings look grim for Team USA superstars
Next Page