US PGA 2015: Jordan Spieth making his move on the leaders as Rory McIlroy has another mixed day

We could be witnessing something special.

Jordan Spieth was one of the big winners of the second round of the US PGA that was brought to a premature halt when the forecasted storms his Whistling Straits.

Well, Spieth and Sweden's David Lingmerth, that is.

END_OF_DOCUMENT_TOKEN_TO_BE_REPLACED

Lingmerth followed up his opening round 67 with a two-under par 70 to hit seven-under before play was suspended.

He is the clubhouse leader but is two behind the impressive Australian duo Jason Day and Matt Jones.

Day in nine-under through 14 while Jones is on the same score but is two holes back.

Both are set to resume play this morning (Saturday, local time) and, weather permitting, they'll have a gruelling day ahead as they attempt to make up for lost time.

Your leader, David Lingmerth, went 9 holes today without a par, so that’s something. pic.twitter.com/L6dG8xeYwc

END_OF_DOCUMENT_TOKEN_TO_BE_REPLACED

But Spieth was the big course mover on the second round.

The 22-year-old, who has already won the Masters and the US Open in 2015, lurks one shot behind after a five-under-par 67 saw him surge up the leaderboard.

Spieth began the second round level with Rory McIlroy on one under, and while the Northern Irishman had another mixed round (one double-bogey, one eagle, one bogey, three birdies) again finishing on one-under-par 71, Spieth went on the rampage to put himself into contention for a third major of the year.

Not that McIlroy is out of it yet.

The eagle on the 2nd (his 11th) was the highlight of his round but it was needed, coming just two holes after a double-bogey.

Rory McIlroy chips in for an eagle at the 2nd (his 11th). He's now two under, four shots off the lead pic.twitter.com/2PZNyaTgHn

Spieth bogeyed his third shot of the day but was spurred on by a chip in from the bunker on the 18th (his 9th) which gave him his third birdie of the day.

Jordan Spieth might hole more bunker shots than any player on TOUR. http://t.co/3nPvjePf50

It was a shot that looked better with every angle.

Watch Jordan Spieth Hole a Bunker Shot on the 18th at the PGA Championship https://t.co/euJVVn2atb pic.twitter.com/dS8w6KNPG5

He followed that up with three more birdies on his back nine to put himself right in the mix heading into the final two rounds.

Those final two round won't feature Shane Lowry or Padraig Harrington both of whom failed to make the cut.

Lowry actually produced a brilliant round of golf, finishing with a three-under-par 69, but the damage was done with Thursday's 78.

Harrington was one under par for his second round but a 76 on Thursday meant he was always facing an uphill battle.

Graeme McDowell will also be on the way home after rounds of 73 and 76 on Thursday and Friday put him out of the running.

Darren Clarke finished at +15 for the two rounds so the less said about that the better.

The top of the leaderboard is incredibly crowded and Saturday should be massively entertaining when play resumes in the afternoon. 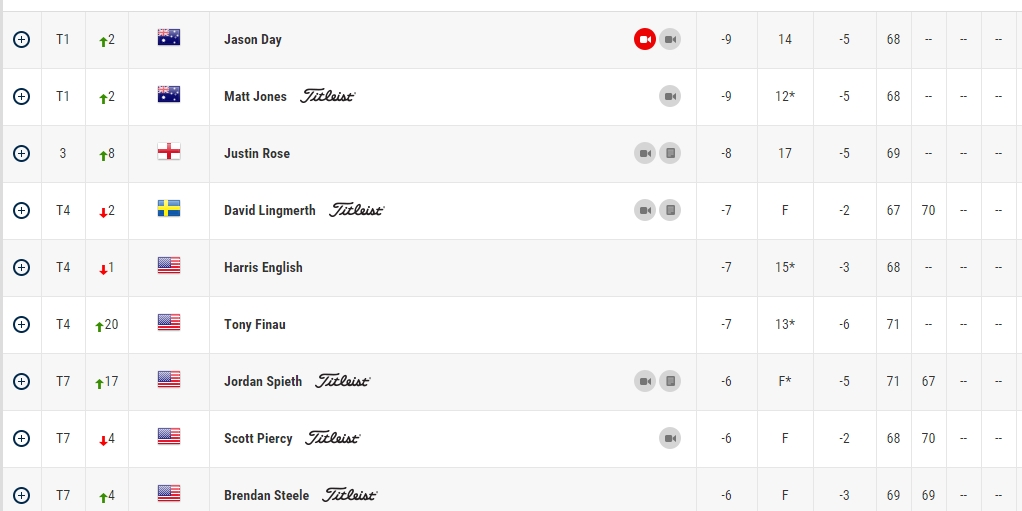 
popular
The most Stone Age tackle you've ever seen gets South African lock straight red card
Ryan Manning hacked to the ground by Henri Lansbury in ruthless assault
Galway fans' frosty reception for Davy Fitz doesn't make any sense
'Brian was a genius... he would've killed you to even win a game of touch'
"Johnno went, 'We’re not moving! You're trying to mess us about!'" - Ben Kay recalls red carpet controversy
"Some of the generals wanted me executed" - Irish rugby legend on flag caper that went wrong
Wallabies star bounces off Duane Vermeulen like a brick wall, gets yellow-carded
You may also like
4 months ago
Rory McIlroy on why he nearly pulled out of Quail Hollow, on Wednesday
5 months ago
Rory McIlroy hits father with wayward shot, on way to opening 76
5 months ago
How a trip to Tiger Woods' trophy room taught Rory McIlroy what's what
6 months ago
"I need a spark, I need something and I just don't seem to have it" - Rory McIlroy
11 months ago
"My job at Sky is not to be a cheerleader for Rory McIlroy" - Paul McGinley
4 months ago
A celebrity by name, just an Offaly man by nature
Next Page