Shane Lowry signed off on a -4 67 to come in as the clubhouse leader after a solid first round at the 148th British Open at Royal Portrush.

The 67 is the Offaly man's lowest ever opening round at a major and when you consider that he has missed the cut at his last four appearances at the Open championship, it's fair shooting and will be a very pleasing round of golf for him.

With only one blot on his copybook, Lowry came in with a very impressive card that included five birdies at the Antrim course.

One of the early risers, the 32-year-old was paired up with Phil Mickelson and South African Branden Grace for his first round. But while Grace and Mickelson in particular failed to fire, Lowry was making very few mistakes out there.

His first birdie arrived on the Par 3 third where he holed out well and that sent him on his way. His next gained shot came on the short par four fifth hole, where his 300 + yard drive left him with a 20 footer for eagle.

Lowry, with his delightful short game was never going to leave that behind him. The eagle didn't drop but he knocked it in for birdie to shoot up the leaderboard alongside the impressive Irish amateur James Sugrue and Darren Clarke. 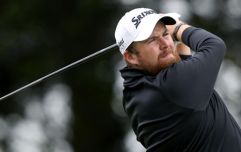 END_OF_DOCUMENT_TOKEN_TO_BE_REPLACED

A lovely sight for Irish eyes. But while Clarke and Sugrue slipped back, Lowry was unfaltering. His only bogey would come on the Par 4 11th hole but any fears of that knocking him back were relayed at the next, when he knocked in the birdie to take the outright lead.

A birdie at 12 moves Shane Lowry into the lead on his own and he reacts with a steely fistpump#InTheZone#TheOpenpic.twitter.com/reRmjfcOuO

He kept it solid down the home stretch, closing out with a trademark up and down to become the clubhouse leader on -4.


popular
Roy Keane on the experience of being managed by Jack Charlton at USA 94
The SportsJOE 12 o'clock quiz | Jack Charlton special (Day 112)
"Never back against the Irish" - How the BBC covered our USA 94 win over Italy
WATCH: Amazing scenes at Aviva Stadium as Jack Charlton is given standing ovation
When the President interrupted a Euro 88 pint between Charlton and Dunphy
'ROG was the kingpin... he just wanted to win, win, win' - Barry Murphy
Packie Bonner on being Celtic's teenage goalkeeper and angering Jack Charlton at Euro 88

You may also like
3 weeks ago
The miracle of the Seir Kieran brothers and the man who was there for every step
3 weeks ago
'Sheep in a heap' become kings of Ireland - The crazy hurling summer of 1998
6 months ago
1-32 table of the most competitive hurling championships in Ireland
7 months ago
From a hurling stronghold to Irish cross country champion - Liam Brady's remarkable journey
8 months ago
"There are 14 other lads to do that. Just get me the ball and I'll win the game for you"
8 months ago
GAA JOE club team of the weekend
Next Page