"I went from thinking I'm right on the cusp of getting into contention to just making the cut."

That, in a gnarly nutshell, is the story of Rory McIlroy and so many of his Major tilts since 2014. So much good but always one bad round out of four, or an implosion that comes out of nowhere.

On Friday, during his second round of the US PGA Championship at Harding Park, McIlroy recovered from an early glitch to card four birdies in a row and move to -3 with eight to play. At that stage he was five off the clubhouse leader, Haotong Li, and would have been aiming to pick up another shot or two down the stretch.

Instead, one bad approach shot on the par-4 12th hole led to a cascade of events that ended with the Northern Irishman three-putting for a triple bogey '7'. He was back to Even par and had given himself another mountain to climb. He eventually finished on -1 so a score in the low to mid 60s, on Saturday, would hopefully put him back in the hunt for his fifth Major and first since 2014.

Wipe that hole away and we would have been talking about how McIlroy was poised for a weekend charge. For all his undoubted class, however, that 12th hole catastrophe is not unusual. Sometimes the 31-year-old can't get out of his own way. Following his round of 69, McIlroy said:

"Once Tiger [Woods] and I got our tee shots off 18, I just gave him a look like, phew, glad that's almost done.

"It was tough out there. We all didn't really have our best. We were grinding just to be here for the weekend. But thankfully all three of us made it to the weekend and we all have an opportunity to go out tomorrow and post a low one and get ourselves back in the tournament." 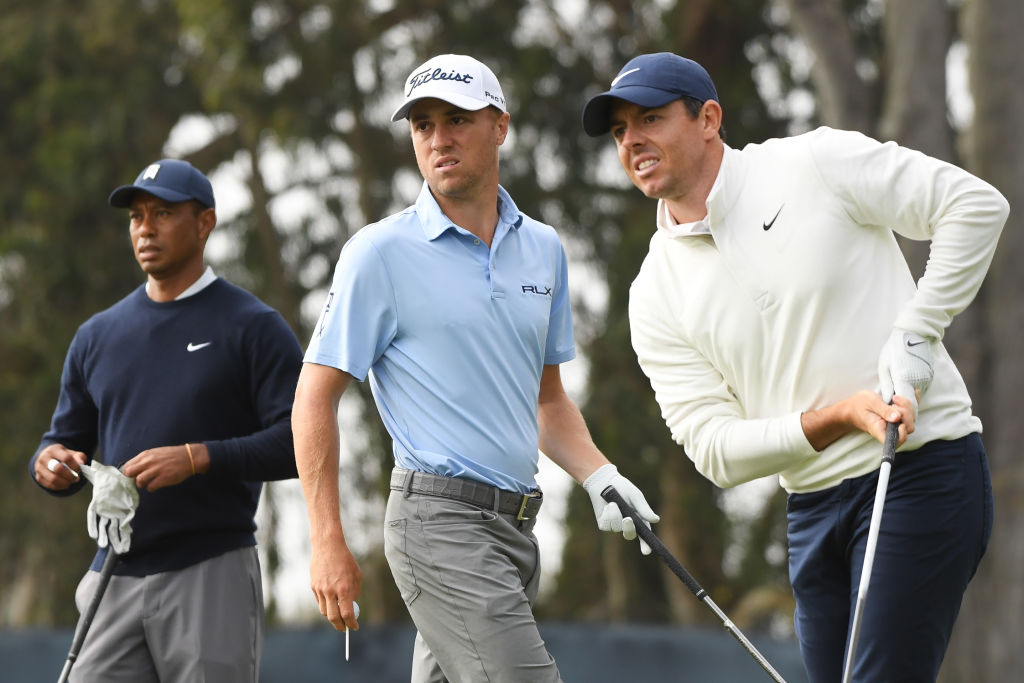 Rory McIlroy reacts to his shot from the 12th tee as Justin Thomas and Tiger Woods look on during the second round of the 2020 PGA Championship at TPC Harding Park in San Francisco, California. (Photo by Harry How/Getty Images)

Early in his round, McIlroy was at his incorruptible best after missing the green on his approach to the par-three third hole. His tee shot drifted to the right and into the thick stuff some 20 yards from the flag.

An on-course reporter, in the effort of trying to locate McIlroy's ball actually stepped on it and made his lie much, much worse. PGA Tour official Mark Dusbabek allowed the Holywood native to retrieve his ball and place it. McIlroy did so but felt the lie was too good. He explained that his ball would have rested lower in the grass, so placed it lower.

Dusbabek would have allowed the higher placing but it was McIlroy that insisted the lie was too favourable. He was, in essence, honest to a fault.

McIlroy ended up chipping to within 20 feet of the hole and came within a whisker of making par but he walked to the tee-box for the fourth hole with a bogey on his card, and with the admiration of golfers the world over. He later explained:

"I just wouldn't have felt comfortable. I placed it, and the rule is try to replicate the lie. No one really knew what the lie was, but if everyone is going around looking for it, it obviously wasn't too good. So I placed it, I was like, 'That just doesn't look right to me'. So I just placed it down a little bit and sort of... yeah.

"You know, at the end of the day, golf is a game of integrity and I never try to get away with anything out there. I'd rather be on the wrong end of the rules rather than on the right end because as golfers, that's just what we believe.

"Yeah, I would have felt pretty wrong if I had of taken a lie that was maybe a little better than what it was previously."

It looked as though McIlroy was getting instant, positive karma with his streak of birdies around the turn. Then came the 12th and, with it, trouble that could ultimately end his latest Major quest in disappointment.


popular
Conor McGregor bought out of Proper 12 whiskey company
"No one comes into racing for money – it is a hard way to make a living" - Elliott releases heartfelt statement
Longford leaving cert schools Europe's finest with measured masterclass
QUIZ: How well do you remember the 2010 World Cup?
Ugo Monye's Lions XV features two Ireland players and Welsh captain
"There's 30 pints of Guinness on the table! The night before a World Cup quarter final"
QUIZ: You have 90 seconds to answer this tricky football question
You may also like
5 months ago
"He's found a way to do it. Whether that's good or bad for the game, I don't know"
5 months ago
Amateur golfers all over the world unite to emphatize with Rory McIlroy
6 months ago
Collin Morikawa makes huge world rankings leap as Lowry drops back
6 months ago
Rory McIlroy defends Dustin Johnson after Brooks Koepka comments
8 months ago
McIlroy and Koepka confirm Nick Watney interactions after golfer tests positive for Covid-19
11 months ago
Rory McIlroy puts golf's enforced holiday in perspective
Next Page