"Would that have been me?"

In his post-tournament press briefing, at St George Golf and Country Club, Rory McIlroy was asked if he knew who the last golfer was to claim a PGA Tour win and follow it up, the next week, with a major.

The Holywood native took an educated guess, and he was correct. Back in August 2014, he won the WGC Bridgestone Invitational and then claimed his fourth major, and second US PGA title, at Valhalla. As 10-day stretches go, it was pretty memorable.

END_OF_DOCUMENT_TOKEN_TO_BE_REPLACED

We all know that McIlroy has not won a major since, and we all know about his early round implosions, near misses and not-so-close calls since then, but it is hard not to get revved up with how he is playing right now.

He made a late charge at the Masters, and early one at the US PGA, and, on Sunday, went a step further by winning when he was in contention at the RBC Canadian Open, in Toronto. He looked set to shoot a sub-60 round after 12 holes but then fell back to the chasing pair of Justin Thomas and Tony Finau before finishing birdie-birdie to defend the title he won in 2019 by two strokes.

Having picked up eight strokes in his first 12 holes, McIlroy wobbled with bogeys on 13 and 16, but saved par with a clutch up-and-down on the 14th after a wayward drive. Asked about that iron approach that prevented him making successive bogeys, he said:

"Yeah, it was massive. I think I was so confident with my wedges today that the lie on 14 after the tee shot wasn't... I felt like I could have got a 5-iron on it and got it up by the green. And maybe previously or a few years ago I would have tried to do that.

"But I just knocked it down there to a number that I knew was going to be comfortable and relied on my wedge play to get that up-and-down. So that was, that's a big step forward for me, something that I probably wouldn't have done previously and I think just having the confidence in my wedge game, knowing, 'Okay, I can get it up-and-down from a hundred yards, move on to the next and no damage is done'. So that was huge."

Asked what his immediate plans were, after the briefing, McIlroy told the press there was a bottle of wine with his name on it, gifted to him by his Team Ireland Olympics partner, Shane Lowry.

"I'll go straight to the locker room, get all my stuff packed up if it isn't already. Give the locker room staff a nice, generous tip for all their help this week. And then get going to the airport. My wife and daughter are already on the plane, so she's probably trying to keep her entertained before I get there.

"And then just get on the flight, go to Boston... I mean, if I'm feeling up to it, once I get to the house that we're renting in Boston I might afford myself a glass of wine or two to celebrate. I give Shane Lowry a ride from Jupiter up to Columbus last week and he brought me a really nice bottle of wine. So that's been with us. So maybe open that, if I'm not feeling too tired.

"And then go to bed and get up again tomorrow and go learn a new golf course and do it all over again." 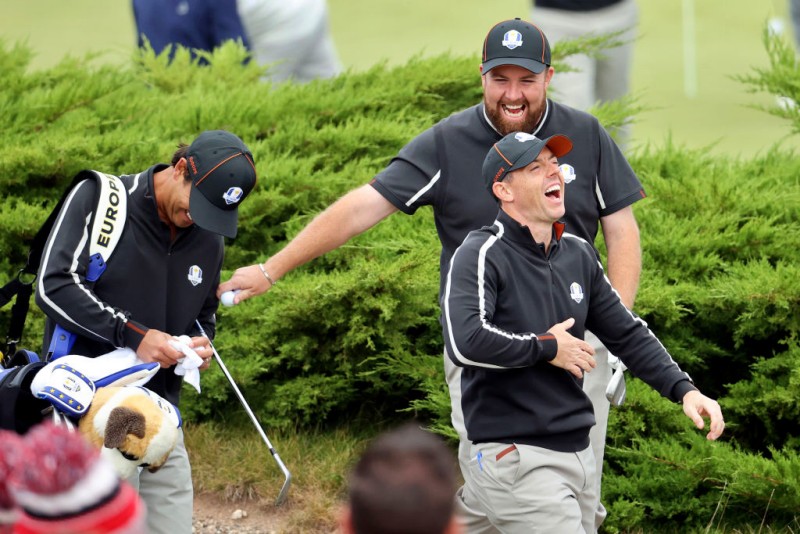 Shane Lowry and Rory McIlroy laugh during a practice round, prior to the 43rd Ryder Cup at Whistling Straits. (Photo by Warren Little/Getty Images)

END_OF_DOCUMENT_TOKEN_TO_BE_REPLACED

Two of the PGA Tours that have come out and spoken strongly in favour of it, amid the lavish launch of the Saudi-funded LIV Golf events, have been Rory McIlroy and Justin Thomas.

It was fitting, then, that the duo were left duking it out for the Canadian Open title, at the end of a week that saw leading players like Dustin Johnson, Bryson DeChambeau, Patrick Reed and more abandon the tour. Fans in Toronto, and watching on TV, witnessed golf at the highest level for a tournament won, in the past, by the likes of Arnold Palmer, Lee Trevino and Tiger Woods.

There was a lovely exchange on the 18th green, between McIlroy and Thomas, after the four-time major winner rolled in his final birdie of an impressive closing round of 62. Asked what the pair said to each other, McIlroy replied:

"JT is a tough competitor, but he's also a really, really good friend of mine. And I have probably more respect for him than maybe anyone else out here. Just because we both live in South Florida, we practice so much together, and I see how much, how hard he works at his craft. I appreciate that and I respect that.

"It's always cool to be able to go up against the best and come out on top. And, yeah, we had that embrace on the final green and I just said, 'Let's do this all again next week'. That's what I said to him. So that would be cool to be able to do it all over again with him."

Next week is Brookline in Massachusetts and another crack at major glory for the Northern Irishman, Thomas and many of the golfers that are now committed to the LIV events.

It will be a fascinating week, after a previous week that shook golf to its' core.


popular
Man United could be blocked from playing in the Champions League next season
Ireland team vs. France: Form players rewarded and a welcome return
Clive Woodward happy to 'eat humble pie' after bold comments about Ireland
Man United's four player transfer shortlist if Qatar takeover goes ahead
Man City expect Pep Guardiola to leave
French media's opinion of this Ireland team becomes clear as vital clash nears
"I should have been more mature" - O'Sullivan's injury trail a cautionary tale for Sigerson casualties
You may also like
2 months ago
Rory McIlroy explains 'falling out' with Shane Lowry that lasted a few years
3 months ago
Ian Poulter fires back after Rory McIlroy comments on Ryder Cup "betrayal"
4 months ago
Shane Lowry on his Tuesday duels with Rory McIlroy at The Bear's Club
4 months ago
Cameron Smith refuses to answer disrespectful question about Rory McIlroy
4 months ago
"You've won enough!" - Shane Lowry and Rory McIlroy embrace after Wentworth nerve-shredder
4 months ago
Shane Lowry beats Rory McIlroy to PGA Championship after thrilling finish at Wentworth
Next Page