Rory McIlroy appears to have changed his tune on Olympic golf

Rory McIlroy had previously cited concerns about the Zika virus as his reason for withdrawing from the Olympic golf tournament in Rio, the first time the sport has featured at the Games since 1904.

However, his comments ahead of the Open last month suggested that he didn't consider winning an Olympic medal to be a priority, and downplayed the importance of the event.

"I'll watch the Olympics, but probably not golf," the 27-year-old said.

"I'll watch track and field, swimming, diving -- you know, ones that matter." 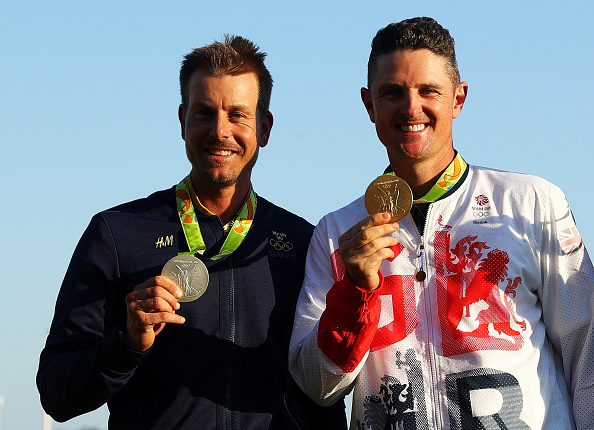 Justin Rose went on to win the tournament, and revealed that, despite McIlroy saying he wouldn't watch the event, he tuned-in to see the Rose win gold for Great Britain and contacted him following Sunday's final round.

"He was very, very proud and said he was rooting for me and could see how much it meant to me," Rose said.

"He was very complimentary - and yeah, obviously he did watch."

McIlroy had also previously said he didn't feel a responsibility to "grow the game" - one of the reasons put forward as to why golf should be included in the Olympics.

However, according to Rose, McIlroy wants to see the golf thrive at the Games.

"He made the point that he really wants golf to succeed as an Olympic sport."

Will Rory make an appearance at the Tokyo Games in four years?

On the latest episode of the GAA Hour Hurling Show, Wooly and the lads reflect on a monumental weekend of action. Listen below or subscribe here on iTunes.


popular
Cutting through the contradictions from one of the worst television segments of the year
Noel Gallagher left 'covered in blood' after headbutt from Ruben Dias’ dad
Aiden McGeady details the abuse he suffered after playing for Ireland instead of Scotland
BBC apologise after accidentally posting mocking Man United message live on TV
The FootballJOE Pub Quiz: Week 38
Roy Keane shows great comic timing after Jack Grealish party invite
France the sore losers as Ireland Men reach first ever Sevens World Series final
You may also like
7 months ago
Katie Taylor's 2016 Rio defeat deserves further investigation according to corruption report
7 months ago
Boxing investigation finds at least seven suspicious results at Rio Olympics
3 years ago
Military coups, AK47s and gold medals - the remarkable story of how Ben Ryan guided Fiji to Olympic Sevens glory
4 years ago
Mick Conlan reveals Instagram message from man who robbed him of Olympic medal
4 years ago
Michael Conlan's embracing the lowest point of his career and making it his own
5 years ago
Ireland loses Olympic sailor Saskia Tidey to Team GB ahead of Tokyo 2020
Next Page