"I still remember the feeling, and I want that feeling again... I'm one great round of golf away from doing it."

Credit to Rory McIlroy, he never shies away from a question about his quest for that [so far] elusive fifth major.

The 32-year-old was not long off the 18th green, and the cheers of, 'RORY, RORY!', when he delivered that line to Sky Sports. He is not going to play down how much bridging what is now an eight-year majors gap would mean to him.

END_OF_DOCUMENT_TOKEN_TO_BE_REPLACED

On US Open Saturday, at The Country Club in Brookline, Massachusetts, McIlroy could not buy a putt on the front nine. On the way home, he had an incredible run of eight one-putt holes in the nine. There were tee-shot bombs down fairways, 'fore left!', scrambles, 'fore right!!', stunning up-and-downs, bad luck, horrible misjudgements and, sometimes, pure magic. When it was all over, he had carded a +3 round of 73.

In other tournaments, it might be enough to rule you out of the title picture. At Brookline, it was enough to stay in the hunt.

This was a day when Will Zalatoris shot 67 to end the day as co-leader with Matt Fitzpatrick, only to tell Sky that it truly felt like he had carded a 61. It was the best round of his life, he said, and no-one would argue. It was so damn tough out there. The pin placements were less forgiving, the wind direction changed from the first two days, and the greens had firmed up.

On a day Collin Morikawa, Beau Hossler, MJ Daffue and Callum Tarren all carded 78s or 77s to plummet out of contention, McIlroy clung on for dear life.

Down the stretch, there seemed to be must-make putts on every hole. Only 14 was a par that should have been birdie. Every other hole from 13 to 17 was a test of the nerves, and the putting.

After making another clutch putt, on 17, McIlroy went way, way, way left with his drive on 18. With Jon Rahm threatening to finish on -6, it look [not for the first time] like curtains for the Holywood native. Then, a stroke of luck.

I see nothing here but straightforward, normal TIO. pic.twitter.com/CczEATxssR

Rory McIlroy and the T.I.O ruling

END_OF_DOCUMENT_TOKEN_TO_BE_REPLACED

As he had driven way over towards the hospitality tents, on 18, Rory McIlroy got a ruling that allowed him to take a drop 10 club lengths back towards the fairway.

The TIO [Temporary Immovable Object] ruling was that a TV broadcast scaffolding was blocking an approach to the green for the Northern Irishman, so relief was allowed.

As there had been a lot of foot traffic, in and out of those hospitality tents, McIlroy dropped onto a flattened out lie. He could now see the green and, with a superb iron shot, he made that green to give himself a look at birdie, from 15 feet. It was a shot that got the crowd roaring, but not everyone was happy.

If I got free relief with a shot to the green like @McIlroyRory every time I hit in the trees, I’d be a scratch golfer #USOpen

They @NBCSports were embarrassed to show the ten club drop @McIlroyRory got after an awful drive. So unfair to real golfers grinding all day @PGATOUR @usopengolf @espn @BBCSport

On the No Laying Up podcast, the hosts discussed Rory McIlroy's US Open challenge and that fortunate break, with the relief call, on 18. ESPN writer Kevin Van Valkenburg, who joined the show as a guest, commented:

"Look, I'm as big a Rory 'Stan' as there is, but that seemed a little... think about Justin Thomas not getting relief from that drain [on a fairway], earlier, which clearly screwed him in every way. And then [Rory] being able to say, 'Yeah, the TV tower is mostly in my way'. It's almost like an honour thing, right? It feels a little bit gross, in that sense."

McIlroy himself admitted the relief ruling was "fortunate" and an example of the breaks, on an up-and-down day, evening themselves out.

"When I saw it up there, I was, like, 'Oh, no'. Then I saw the rules official standing beside it, and she said, well, you can get relief if you think you can get your ball from where it is back around and in line with the pin. I said, 'Well, I can hit a draw pretty good, so, yeah, I think I can do that'.

"Then she said, 'Then you're entitled for relief', and then I took relief. I still had to hit a pretty big draw around that tree, but it was a huge break. If that grandstand hadn't have been there, I'm sort of just chipping out, and a 4 would have been a real... 5 was probably the score I would have made, and to have a putt for birdie on that hole was huge.

"Yeah, it was fortunate. I said earlier I felt like a couple of bad breaks on the front nine, so that break on 18 definitely made up for them." 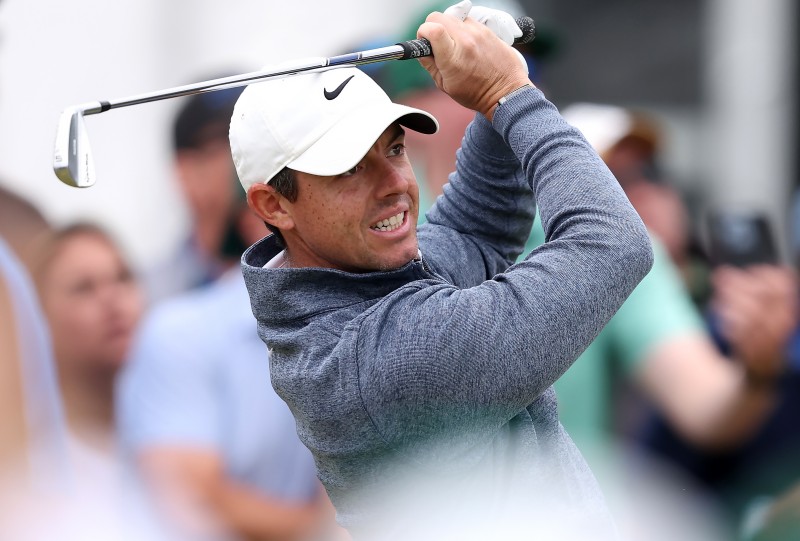 Rory McIlroy of Northern Ireland tees off on the first hole during the third round of the 122nd U.S. Open Championship at The Country Club, in Brookline, Massachusetts. (Photo by Warren Little/Getty Images)

'You need to be an eternal optimist' - Rory McIlroy

As for the man himself, he was not backing down from the challenge facing up on Sunday at the US Open.

"Whenever you're giving yourself these 10-, 12-footers for par all the time and you're stepping up and making them, that's huge," he said.

"Yeah, look, it's not as if I haven't been able to play good golf in bad conditions before, but I think in situations like this and like yesterday where the run could have got away from me, I just dig in there a little bit more. I guess I'm always trying to look for the positives. I'm always trying to think, okay, you can maybe birdie one of the next three, and then you've got a par-5 coming after that.

"I'm always sort of trying to look at the positive side of things and be optimistic. In this game of golf you need to be an eternal optimist."

*You can stream all the US Open action live across the weekend with a NOW Sports Membership.