The 'Road Hole' crowd were in raptures.

After Cameron Smith put the lights out, on Day Two of The Open Championship, Rory McIlroy kept well in the hunt with a shot that not many of his peers would have even attempted.

McIlroy will go out in the penultimate pairing, on Saturday, after following his opening day 66 with a round of 68. There were six birdies, but any sort of charge was tempered by bogeys on the 8th and 15th.

END_OF_DOCUMENT_TOKEN_TO_BE_REPLACED

Going out earlier in the day, Australian Cam Smith carded a superb 64 in a round that included six birdies and an eagle. That Smith eagle arrived with minutes of McIlroy bogeying the par-three 8th hole after a lax tee-shot. In almost no-time, McIlroy went from three off the lead to six behind.

Smith would play conservatively over his final four holes and leave himself safe but long looks at birdie. He had put daylight in between himself and the chasing pack, but a 62 or 63 would have been a considerable blow to the field.

That McIlroy three-putt on the massive 8th green saw him slip to -7, but good times were to follow down the closing nine holes. 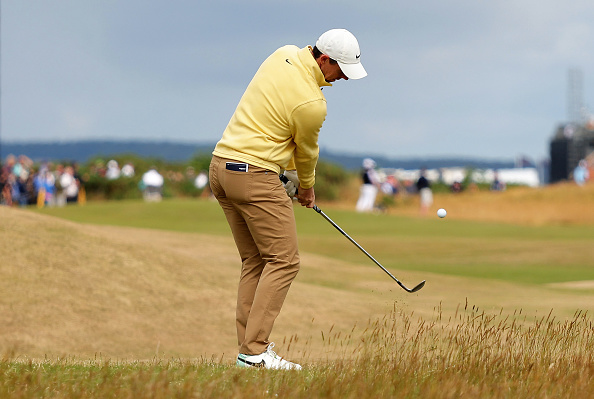 Driving to the greens with big tee-shots

The raw power of Rory McIlroy, off the tee, set him up for a few long looks at eagle over the closing stretch.

The first howitzer came on the 372-yard 10th hole, as he smote a drive, went close with his eagle attempt and drained the birdie putt.

'What a line this is on'

Rory McIlroy goes for it on 'Road Hole'

END_OF_DOCUMENT_TOKEN_TO_BE_REPLACED

Further birdies followed on 11 and 12, getting McIlroy to -10. The last time he got this low after 36 holes in a major, he won a major. He was well set to challenge that leading marker set by Smith.

Then came an errant drive on the 15th. McIlroy was in the rough so put a lot on his approach to the green, so over-cooked it. He had a 99-foot birdie putt, and lagged it to within five. Looking like he had earned a get out of jail free card, McIlroy ran his par putt by the hole and he was back to -9.

Par followed on the 16th before McIlroy and his playing partners teed up at one of the most notorious and tough holes at St Andrew's Old Course - the 'Road Hole' 17th.

If you don't make the fairway with your drive, your chances of making a birdie are drastically reduced. McIlroy found the second cut of rough, albeit wispish, but on-course Sky Sports commentator Rich Beem [a former major winner himself] urged caution. If McIlroy over-shot his approach, he could easily have ended up on the road at the back of the 17th, and in danger of bogey or double bogey.

"If he doesn't catch this right," Beem warned, "it could be a flyer."

Rather than either laying up or going for the heart of the green, McIlroy went for the front and wanted to run the ball up towards the hole. He was initially anxious when the ball took flight, but he ended up leaving himself with a 21-foot putt for a crucial birdie, which he sank.

A birdie on the Road Hole?

Rory McIlroy talks through the big birdie on 17

That birdie putt Rory McIlroy back to -10 and saw the galleries around the Road Hole erupt. After Tiger Woods, the Northern Irishman is the most popular golfer at this storied course.

He had a good chance to reach -11 on the last but his birdie putt slipped by. He let out a self-admonishing 'F***' as he walked off the green, toward his caddy, Harry Diamond. The BBC explained, 'You can all tell what he thought of that', but there was no explanation or apology needed. This was high-class, high-wire golf.

Following his round, McIlroy looked back on that birdie on 17. He told Sky Sports:

McIlroy will go out in the second to last pairing, on Saturday, with Viktor Hovland, who dropped a stunning iron approach eagle from 190 yards out, on the 15th. That pair are on -10 while the final pairing with be Cam Young (-11) and Cameron Smith (-13).

"I'm walking off picking holes in everything," McIlroy reflected, "and I know I could have gone one or two lower, but I'm in a great position."