"There is no coming back for Rory McIlroy"

The world number three must already be hating the eight and a half month wait for major season to come around again.

An opening round of 78 could not be salvaged by his round of 65 on Friday and, after some up-front and emotional media interviews, Rory McIlroy faded into the background at Royal Portrush.

There were a good few tales of McIlroy making the weeks of several young golf fans at the course - posing for pictures, signing autographs, giving away golf gear and balls, taking time out for wee chats - but the 30-year-old would have dearly loved to make some lasting memories for all in attendance by winning The Open on home turf.

Not long after Shane Lowry, cheered on by the Irish contingent and many more at the County Antrim course, lifted the Claret Jug, McIlroy posted a nice photo and tribute to his friend:

"Even though last week wasn’t the week I had envisaged for myself, I couldn’t be happier and more proud of Shane Lowry. How he handled everything over the weekend…. emotions, nerves and conditions tells you everything I’ve gotten to know about him over the past 15 years."

END_OF_DOCUMENT_TOKEN_TO_BE_REPLACED

McIlroy will hate the 260+ day wait for the US Masters to come around. By the time it does, the wait for a Major victory will be rapidly approaching five years.

The Portrush set-back, caused by disastrous triple and quadruple bogeys on two holes in the first round, will haunt him a while yet. He set a course record in that second round [Lowry would go on to beat it with a 63 on the Saturday] and missed the cut by a stroke. 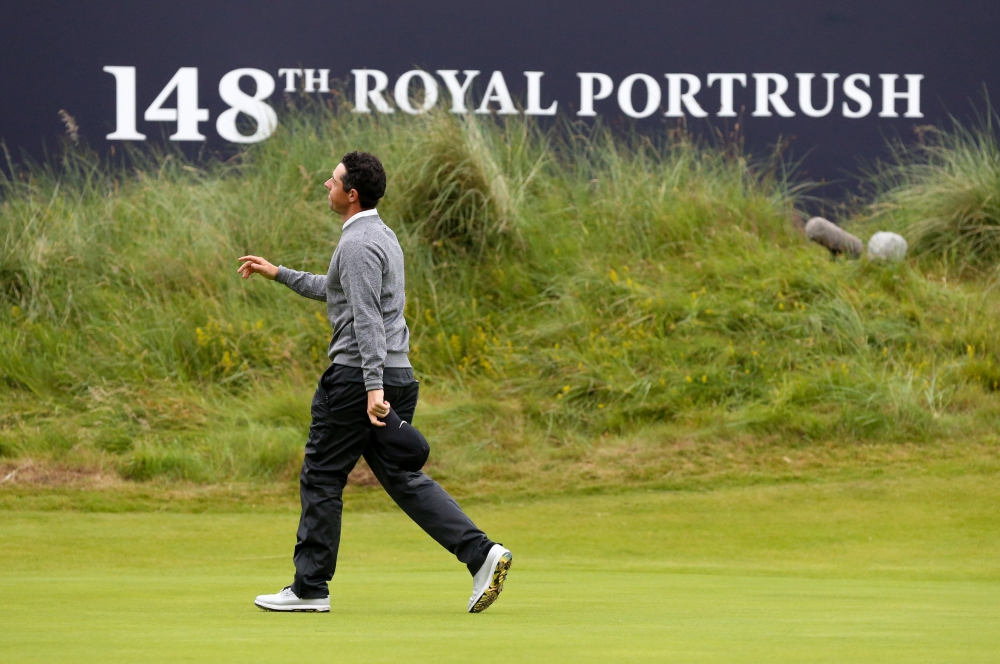 McIlroy on the 18th green after finishing his second round, and narrowly missing The Open cut. (Photo by John Dickson/Sportsfile)

END_OF_DOCUMENT_TOKEN_TO_BE_REPLACED

There are three ways he could respond to it - by his performance-levels dipping, upping his game or by continuing with the current trend of purple patches and tournaments when he looks good but always seems to have one off-day.

Our take is that we will see McIlroy finish out the year in decent form and tackle 2020 with renewed vigour. The three-and-a-half month major season run will take in Augusta, Harding Park (San Francisco), Winged Foot (New York) and Royal St George. The latter of those four represent McIlroy's best two chances but he has shown that he has the game to win at Augusta if he can start dropping putts.

END_OF_DOCUMENT_TOKEN_TO_BE_REPLACED

For some, though, McIlroy has only re-enforced his reputation as a supremely talented golfer that simply does not have the heart and steel to win majors any more.

On the popular No Laying Up golf podcast, there was a mock death announcement for McIlroy and a dig at his recent social media posts plugging Golf Pass. Contributor Phil 'Big Randy' Landes declared"

"Unfortunately, Rory... he's dead. He's died. He has not won a major now in five years.

"He came home to live out his last days. He spent them peacefully amongst friends. There will be a celebration of life... well, it's family only. In lieu of flowers, we ask that you all subscribe to Golf Pass.

"But he is dead. He has died. There is no coming back."

"I just said at the beginning of the year," he added, "I kind of gave Rory an ultimatum that... I was just getting tired of, 'This is Rory's week. Will he win it?' I was like, 'Look, if he doesn't win a major this year, he's dead to me. He's gone. And here we are."

Some take, especially as McIlroy has won The Players Championship and Canadian Open this year and was in the mix at the US Open and US PGA.

In fairness to the American show, the take on McIlroy was described as a comic "bit" while world number two Dustin Johnson, in the same piece, was given 12 months to live by Landes. Johnson is a former US Open champion but has not won a major since that one in 2016.

For now, and for the rest of the year, McIlroy will have to live with people questioning his motivation and whether he will ever win another major.

He won four majors between 2011 and 2014 before going on his dry streak. Getting number five, we feel, could spark a period of renewed belief and confidence.

There was once talk, back in 2014 and 2015, of Rory McIlroy making a run on Tiger Woods and Jack Nicklaus' major hauls but right now, number five would be enough. McIlroy certainly has it in him to break the duck next year.

Lowry told reporters, after his first ever major win, that he openly wept after disappointing in last year's Open at Carnoustie.

We did not get to see those tears, but we all saw McIlroy's. Who is to say that his Open failure will not be the spur he needs to push on to the next level, again.


popular
Javier Hernandez offers to play for Manchester United for free
Mario Balotelli, Luis Suarez, Fernando Torres and why Rio Ferdinand "hated them"
"I don’t trust you" - Joey Barton delivers brutal dismissal of Irish defender
"I remember just hugging this Irish guy" - How one Kiwi rugby star reacted to Ireland's historic series win
Down county football is in tatters, but Conor Laverty is the man to piece it back together
"I'll ask for everyone that comes to the game to wear purple and roots for us" - Pat Fitzgerald
Gatecrashed interviews and chip-shop previews - Wexford GAA's online coverage sets the standard
You may also like
3 weeks ago
Viktor Hovland made a lovely gesture to Rory McIlroy after his sublime eagle
3 weeks ago
Tiger Woods on Rory McIlroy's gesture on 18 that caused the damn to break
3 weeks ago
Rory McIlroy gets Open crowds roaring with ballsy shot on 'Road Hole'
3 weeks ago
"He shouted fore" - Rory McIlroy accidentally breaks fan's hand with tee shot at Open Championship
3 weeks ago
Rory McIlroy rides adrenaline from first hole "bonus" to go low at The Open
4 weeks ago
Tiger Woods goes to town on LIV Golf defectors at Open press conference
Next Page