Rory McIlroy reeled off four birdies at one stage of his second round in the US PGA yet still trails Brooks Koepka by 15 shots.

Adam Scott and Jordan Spieth are both playing superbly to be on -5 at the halfway point of the US PGA Championship. Still, they are seven shots off the pace.

That pace is being relentlessly set by Brooks Koepka, who is on course for Major number three after reaching the mid-point on -12. No-one can live with the man.

END_OF_DOCUMENT_TOKEN_TO_BE_REPLACED

Koepka has carded 63 and 65 at the Farmingdale course and is seven clear of Scott and Spieth, with five more players on -4.

Shane Lowry just made the cut with a second round of 69 to reach +4 while a much-needed birdie blitz has Rory McIlroy one shot better off. Graeme McDowell is on +2 but all three men are just battling, at this stage, to finish as high up the leaderboard as they can.

Asked what he was plating for after his round of 71, McIlroy told reporters:

"Pride. Just pride. Just trying to play a good round of golf and try to get something that's close to the best out of myself.

McIlroy will tee off his third round some 15 shots behind Koepka and he feels his only option is to play good golf and let what will be, be. 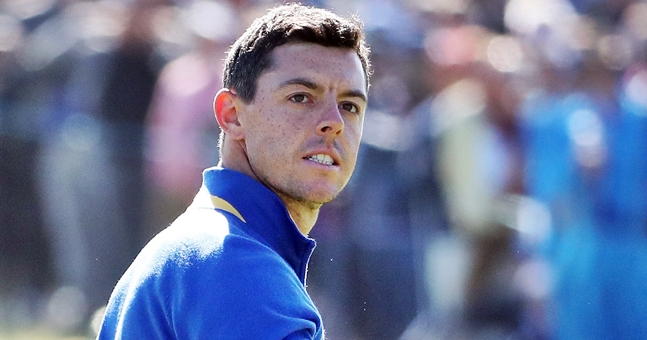 "Oh, yeah, I was 4-over through 3 in Boston a couple years ago and ended up winning the tournament, and that just sort of came back into my mind after I made that start," Rory McIlroy continued. "So in a way it's calming.

"I've been in this position before and I've been able to come back. Or you go back to Birkdale a couple years ago where I was 4-over through 5 or 5-over through 6 and shoot 71 and all of a sudden finish, you know, had half a chance on the back nine that day.

"So it's not as if I haven't been in those positions before, it's just a matter of not pressing too much and staying patient and letting the good golf sort of come through. Took a while today, but it eventually got here."

Some players to miss the cut include John Rahm, Sergio Garcia and Tiger Woods (all +5), Ian Poulter and Patrick Reed (+6) while Padraig Harrington finished on +12.

There is simply no living with Koepka at present.


popular
Rob Kearney taught a classic GAA lesson when he tried to have the craic in second game back
Shane Lowry had no problem setting reporters straight at Ryder Cup briefing
The scenes in Newbridge as the biggest hit and hope ever knocks Moorefield out
How one text message a teammate sent Kieran McGeary proves that Tyrone's success was a team effort
When Liam Brady lit into Brian Clough for his dismissive Mick McCarthy comments
Kieran McGeary on his relationship with Mickey Harte and his role in Tyrone's success this year
"Mayo have been back and back and back all the time. That's some resilience, to do that." - McGeary bats for Mayo
You may also like
3 months ago
Rory McIlroy recovers from a hard place to keep US Open dream alive
4 months ago
Rory McIlroy on why he nearly pulled out of Quail Hollow, on Wednesday
5 months ago
Rory McIlroy hits father with wayward shot, on way to opening 76
5 months ago
How a trip to Tiger Woods' trophy room taught Rory McIlroy what's what
6 months ago
"I need a spark, I need something and I just don't seem to have it" - Rory McIlroy
11 months ago
"My job at Sky is not to be a cheerleader for Rory McIlroy" - Paul McGinley
Next Page