"It will take a while probably."

The wait for a fifth major goes on, for Rory McIlroy, but he is pretty bullish about his chances as The Open Championship draws near. Still, he admitted it will take time to truly take any positives out of his top-five finish at the US Open.

McIlroy, for the second major running, shot himself into contention with a great opening round and a battling second round, only to falter over the weekend. He ended up on -2, four shots back from winner Matt Fitzpatrick. Close enough to have regrets but not as close as Will Zalatoris, who missed a putt on 18 that would have forced a playoff.

END_OF_DOCUMENT_TOKEN_TO_BE_REPLACED

Ahead of his final round, as he sat three back from Fitzpatrick and Zalatoris, McIlroy was open about his drive to end what is now a eight-year wait to claim a fifth major. "I still remember the feeling, and I want that feeling again," he told Sky Sports. "I'm one great round of golf away from doing it."

On Sunday, he shot 69 and it was, ultimately, that third round 73 that cost him. In his post-tournament press briefing, the 32-year-old painted a brighter picture than many of his long-time fans will be seeing for the next while. 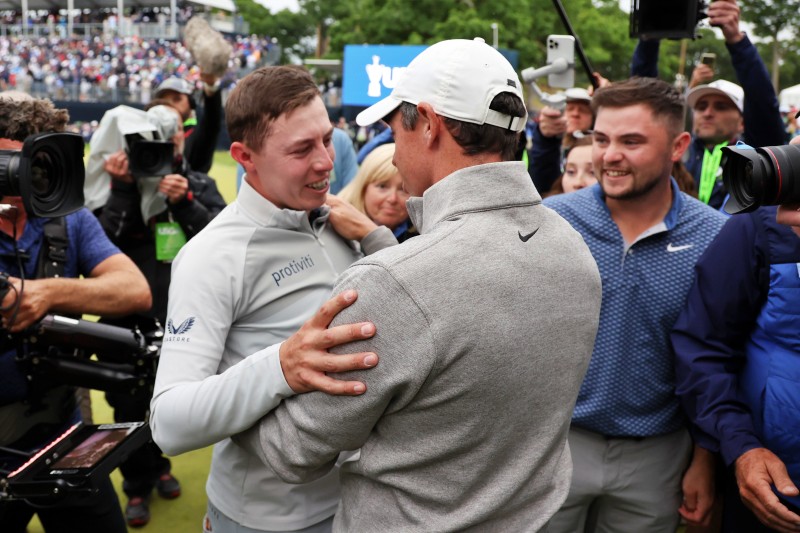 2022 US Open champion Matt Fitzpatrick of is congratulated on his win by Rory McIlroy of as he walks off the 18th green at The Country Club in Brookline, Massachusetts. (Photo by Rob Carr/Getty Images)

END_OF_DOCUMENT_TOKEN_TO_BE_REPLACED

While Rory McIlroy showed superb scrambling and iron approaches, his putting was a real highlight. It was not always perfect but he was electric on the greens whenever that putter warmed up.

What got McIlroy in trouble was some poor drives that forced him into rescue mode and, on occasion, cost him on holes that others were getting birdies on. Asked about the iffy tee shots and fairway woods, McIlroy commented:

"I struggled with the 3-wood all year. I still haven't quite found the one that I'm 100 percent confident with. Yeah, a few misses left with the 3-wood this week, which wasn't... it's hard because there's holes out here where you had to hit fairway wood, and I had to just get really comfortable trying to do that.

"Maybe something I need to try to work on going into The Open - trying to get a 3-wood that I'm 100 percent comfortable with. But, as you said, overall I did a lot of really good things this week - putted well, scrambled well, hit a lot of good iron shots. So I just need to keep doing that, keep doing my thing, and I'll have another opportunity in a few weeks time to try to get another one."

END_OF_DOCUMENT_TOKEN_TO_BE_REPLACED

McIlroy confirmed he will play the Travelers [sic] Championship in Hartford, next week, then take the following week off so he can go get some practice in on links courses, ahead of The Open at St Andrew's.

After staying on to congratulate Fitzpatrick, just off the 18th green, McIlroy was not getting too hard on himself as he reflected on another close-but-not-close-enough major.

"I have to stay patient at this point," he said, "because if I just keep putting myself in position, sooner or later it's going to be my day and I'm going to get one."

"I played well enough to give myself a chance to win," he added. "I didn't get the job done, but I'm closer than I have been in a while, which is good."