Served this one up, nice and hot.

Rory McIlroy and Ian Poulter together on Ryder Cup weekend. That's one hell of a feisty team.

The European teammates had varying fortunes on Saturday morning - McIlroy winning with Sergio Garcia while Poulter and Jon Rahm lost in the final fourballs - but they were hoping to recreate their magic from Friday afternoon.

Poulter and McIlroy got off to a great start when they went 2 UP after three holes. It was at the third hole that McIlroy had a spicy encounter with a bellicose spectator in Team USA colours.

The fan mocked McIlroy as a poor putter and, when McIlroy sank his putt, he turned and faced him down. 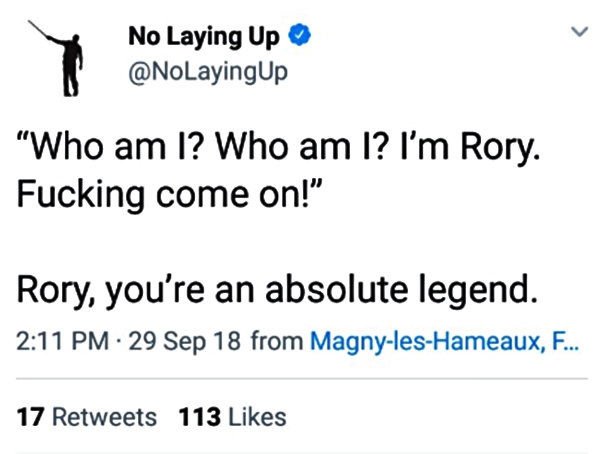 The response got a rousing reaction from the European fans that were packed around the green at Le Golf National's third hole.

It was definitely a stand-off that shows how close to the action the fans are and how some are pushing their luck with the verbals.

McIlroy may well have been too pumped up by the exchange, however, as he went way, way right off the fourth tee. Jordan Spieth and Justin Thomas took that hole to go 1 DOWN.

The Americans won the fifth and sixth too and that section of the scoreboard turned from blue to red.

popular
Eric Dier calls Dele Alli on his tantrum in All Or Nothing changing room row
SportsJOE 2000s Football Quiz | Round 16
Sean Kelly sums up emotion of a nation as Sam Bennett all but sews up the green jersey
"I've always said I'll go back and play. I'll 100% play with Portlaoise again, and I really want to play for Laois"
The SportsJOE 12 o'clock quiz | Day 181
The Tipp minors who beat Dublin's golden generation: the ones that got away
The Alby Mathewson speech that lit a fire under Ulster
You may also like
1 month ago
Collin Morikawa makes huge world rankings leap as Lowry drops back
1 month ago
Rory McIlroy defends Dustin Johnson after Brooks Koepka comments
1 month ago
Rory McIlroy speaks superbly on conscience call that cost him at US PGA
2 months ago
McIlroy and Koepka confirm Nick Watney interactions after golfer tests positive for Covid-19
6 months ago
Rory McIlroy puts golf's enforced holiday in perspective
6 months ago
Rory McIlroy has no time for the Premier Golfing League and commands respect for it
Next Page