He can hardly be the only one.

After getting a front-row seat to the Jordan Spieth show yesterday, Rory McIlroy gave a brutally honest appraisal what it's like facing the Masters champion.

The Irishman began the third round at Augusta just a single stroke behind the defending champion, and despite neither playing particularly well, McIlroy found himself trailing by eight shots before Spieth's late collapse at least left the door ajar heading into today. 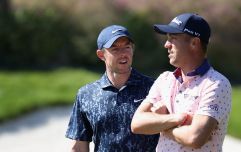 END_OF_DOCUMENT_TOKEN_TO_BE_REPLACED

McIlroy was understandably frustrated, especially given he was striking the ball better than his rival for much of the front nine, only to see Spieth scramble his way further ahead while the world No.3's putter went cold.

McIlroy's own game went further south early on the back nine as Spieth continued to hole crucial putts to hold onto the lead, although a bogey-double bogey finish cut that advantage to a single shot over Smylie Kaufman and left him five ahead of European No.1.

"I turned around after 15 and I thought 'how the hell is he [Spieth] two-under-par today?'," McIlroy said.

"But it's his most impressive asset. As much as it could be annoying to his competitors, it's very, very impressive and I think the guys that are out there, that are playing that golf course today, we're the ones that appreciate that the most.

"As much as it does dishearten you seeing those putts lip in, you've got to take your hat off to him because he's such a grinder and such a battler and he always sticks in there."


popular
"I've had stick my whole career" - Mike McCarthy on 'Plastic Paddy' jibes and singing the anthem
Roy Keane explains why Ireland didn't 'tie down' Declan Rice and Jack Grealish
Roy Keane has his say on Stephen Kenny's performance as Republic of Ireland manager
'Go and get a job' - Ronnie O'Sullivan responds to Shaun Murphy's amateur player comments
"Just brilliant" - Alex Goode backs Caelan Doris for 'Best Player' award
BT Sport release statement as Chris Sutton is denied access to Ibrox again
Ulster make massive statement as they out-gun Leinster in Dublin
You may also like
1 month ago
'I was sitting here this week and people were wondering if I was going to retire'
1 month ago
Rory McIlroy back to stunning best as he blows away star-studded field
1 month ago
Rory McIlroy and the Saturday night pep-talk that may yet change his fortunes
2 months ago
"I never really cried or got emotional over what I've done as an individual. I couldn't give a s***"
2 months ago
Rory McIlroy breaks down in tears after winning point for Team Europe
2 months ago
"I told him the absolute truth" - Sergio Garcia on his Ryder Cup talk with Rory McIlroy
Next Page