At the age of 52, Phil Mickelson is over at St Andrew's for a crack at winning a second Claret Jug.

Mickelson took a short golfing sabbatical after some ill-judged comments on LIV Golf and the breakaway series' Saudi backers. Now back, a full-fledged LIV Golf member and insisting he is in a better head-space, the six-time major winner is on the hunt for another Open Championship.

END_OF_DOCUMENT_TOKEN_TO_BE_REPLACED

The American carded an opening round of 72 and was left ruing three bogeys in four holes, on the back nine. Still, he is more than capable of going low on Friday, and making up ground on the likes of Cam Smith [-5], Rory McIlroy [-6] and leader Cam Young [-8].

Divisions are still clear in professional golf, right now, after the creation of the LIV Golf Series and the defection of many golfers from the PGA and DP World Tours. Such fissures were clear when the R&A St Andrew's officials wrote to ask LIV Golf chief executive Greg Norman not to attend the tournament, and asked Mickelson if he would not go to the 'Champions Dinner', on Tuesday.

The following is an exchange - spread out in between other reporters' questions - between Phil Mickelson and a journalist that wondered if missing out on the past champions' dinner had stung:

Q. Phil, can I ask why you weren't involved in the past champions events here at the start of the week?

PHIL MICKELSON: The R&A contacted me a couple weeks before and said, look, we don't think it's a great idea you go, but if you want to, you can. I just didn't want to make a big deal about it, so I said fine. We both kind of agreed that it would be best if I didn't.

Q. Going back to the dinner, you don't find it very sad that you're in this position?

PHIL MICKELSON: No. No, not at all. I think that I couldn't be more excited and ecstatic with where I'm at. I love the events. I get to have golf in my life and competitive golf in my life on a scale that is fun, exciting, different, and lets me play and compete but still do the things outside that I want to do.

I've got a nice trip lined up after this and things that I haven't been able to do in the past. So, no, I couldn't be happier.

Q. Even missing out on an occasion like the past champions dinner with The 150th...

PHIL MICKELSON: Let it go, dude. Let it go. That's three times you've asked the same question. I don't know what to tell you. I couldn't be happier. 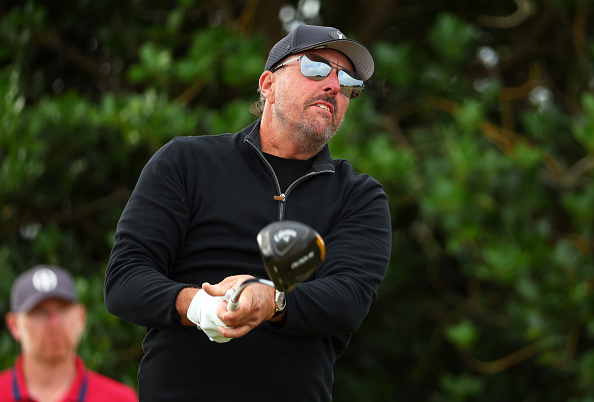 Phil Mickelson tees off the third hole during Day One of The 150th Open at St Andrews Old Course. (Photo by Andrew Redington/Getty Images)

END_OF_DOCUMENT_TOKEN_TO_BE_REPLACED

On Tuesday, Tiger Woods was firm in his opinion that LIV Golf defectors had damaged the PGA and European [DP] Tours, and questioned why some golfers would risk missing out on historic championships to chase money in 'no cut' events.

The 15-time major winner reportedly rejected a seven-figure payment from LIV Golf to join their breakaway series. Phil Mickelson was asked about Woods' comments and was not getting drawn into any beef with his former Ryder Cup teammate.


popular
Ireland team to play Wales: Andy Farrell's XV, the big calls and bold cuts
Ireland's self destructive mentality kills Croke Park fight for Katie Taylor
Roy Keane reminds everyone of his feelings towards Newcastle United ahead of cup final against Man United
Even Roy Keane felt Michael Dawson went too far with his remark to Tom Heaton
Everton release brutal 59-word statement to confirm Anthony Gordon departure
Five confirmed changes and guidelines to have big impact on 2023 Six Nations
Owen Farrell praises Johnny Sexton in revealing interview ahead of Six Nations
You may also like
1 month ago
GAA officially the most popular sport in Ireland again
3 months ago
Ian Poulter fires back after Rory McIlroy comments on Ryder Cup "betrayal"
3 months ago
Shane Lowry on his Tuesday duels with Rory McIlroy at The Bear's Club
4 months ago
Shane Lowry holds hands up over Saudi Arabia comments as he admits 'golf could be in trouble'
4 months ago
Cameron Smith refuses to answer disrespectful question about Rory McIlroy
4 months ago
Shane Lowry was nothing but gracious when asked about Queen Elizabeth II, after Wentworth triumph
Next Page