Michael McGinley Jr to you, us and everyone.

This man should no longer be recognised as Paul McGinley's brother in golfing terms. He should be known as the hole-in-one guy (or something better, preferably).

The Irish golfer hit a sensational run of form last week when he racked up three (that's right, three) hole-in-one shots in the space of just six days. 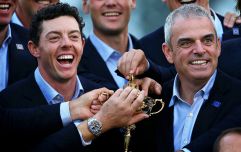 END_OF_DOCUMENT_TOKEN_TO_BE_REPLACED

Brother of Europe's Ryder Cup-winning captain, Michael Jr is living in the UAE and he's setting his local golf club alight with plays like this.

He hit his first hole-in-one of the week (and the first since he was a teenager) using a four-iron for a 224m ace. He hit his second in as many days using a nine-iron before the same club did the trick four days later to cap three in lightning time.

“It is an amazing feeling," he said in an interview with The National. "I had a hole-in-one when I was 15 years old and haven’t had one since. To have three in six days is just incredible and something that I will definitely never forget. Achieving two hole-in-ones in two days was something special, however the third really is unbelievable.”

You know Paul McGinley? He's the brother of hole-in-one guy...