Paul Dunne just does not know how to stay out of the limelight.

The Irish golfer, who had the country transfixed earlier this summer after his exploits at the Open Championship, is taking his first steps as a fully fledged professional golfer this afternoon at the Dunhill Links Championship.

The Greystones golfer has enjoyed a rollercoaster of action since his exploits back in July as he finished 30th in the race for the Claret Jug, and subsequently being  granted a special exemption that allowed him to play in this year's U.S. Amateur Championship.

The 22-year-old has since become a professional player and today is playing his  first round at the  Dunhill Links Championship where he has hit the dream of any golfer at any grade,

Paul Dunne enjoying his 1st professional start. Just made a hole in one at the 15th hole at Kingsbarns! #DunhillLinks pic.twitter.com/V1HiQm9g3F 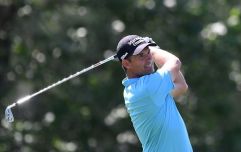 END_OF_DOCUMENT_TOKEN_TO_BE_REPLACED

Dunne is in hot form recently, having been part of the recent Walker Cup success while he also enjoyed a profitable appearance at the first stage of Qualifying-school alongside Jack Hume in Austria last week.

At the time of writing he is three under after 8.

popular
McGregor admits shout from Dustin Poirier's corner got inside his head
Dustin Poirier annihilates Conor McGregor to earn stunning UFC 257 victory
McGregor's first words to Poirier after defeat show where the damage was done
Jolie Poirier certainly let her voice be heard after her husband's win over McGregor
Dustin Poirier's reaction to win over Conor McGregor has fans labelling him 'perfect role model'
Khabib Nurmagomedov reacts to Conor McGregor's shock UFC 257 loss
He'll be remembered as a footballer but Keith Higgins has always been a hurler
You may also like
2 years ago
Irish quartet have one last shot at making The Masters
3 years ago
McIlroy just one back as Paul Dunne fires his way into contention in Abu Dhabi
3 years ago
Paul Dunne, Ireland's next great golfing hope, deserves to be our SPOTY
3 years ago
You had to feel for Shane Lowry after his absolute heroics in Dubai
3 years ago
Unreal scenes as Paul Dunne beats Rory McIlroy for first ever professional win
3 years ago
This ridiculously flukey shot may just be the one to help Paul Dunne get his maiden win
Next Page