Irish quartet have one last shot at making The Masters

The Irish contingent at Augusta, as it stands, is weak.

At the moment, The Masters isn't great from an Irish perspective. Rory McIlroy is there, obviously, but that's it.

Despite his brilliant win at the British Masters in October, Paul Dunne is not in the field for the year's first major, but the 25-year-old Greystones native's T5 finish at the Corales Puntacana Resort & Club Championship has handed him a lifeline. Thanks to that finish, Dunne is competing at the Houston Open this week, needing a strong performance to push him inside the Top 50 and secure his place at Augusta.

And he's not the only Irishman dreaming big in Texas this week, with Seamus Power, Padraig Harrington and Shane Lowry all hoping to squeeze their way into the Masters too.

Like Dunne, Power secured a top-five finish at the weekend and it must have come as a huge relief having missed his previous four cuts. The Waterford man is now hoping to use the momentum gained to his advantage and qualify for the Masters at the last hurdle, but only a win will do.

Paul Dunne (69) & Seamus Power (71) finish tied 5th on -11 in Puntecana Championship in Dominican Republic on PGA Tour. Both earn Cheques for just over $100,000. Highest finishes for both on the PGA Tour. Power’s 2nd six figure cheque of the year after 4 consecutive missed cuts. 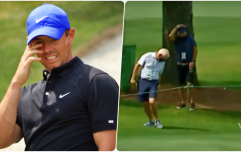 END_OF_DOCUMENT_TOKEN_TO_BE_REPLACED

The more established duo of Harrington and Lowry will also be absent in Georgia next week unless they pull something out of the bag. Lowry has played in the event over the last three years but the 30-year-old's erratic form of late has seen fall out of the world rankings top 50 to 77th.

Harrington has played in the Masters 15 times but his last appearance came in 2015 and, judging by his recent showings, there will be no place for the three-time major champion. Harrington has played six times this year, missing five cuts, with his only finish a tie for 64th.

The mystique and allure of Augusta will always make The Masters a compelling watch, especially now that Rory McIlroy and Tiger Woods have shot back to prominence.

However, considering the success of Irish golf in the past decade, it would be disappointing if McIlroy was the only representation on those immaculately manicured fairways next week.


popular
Peter Queally vaults into Bellator title picture with stunning win over Pitbull
Gatland comments give insight as to why CJ Stander missed Lions call
The Garry Ringrose narrative around the Lions Tour is complete bull
The SportsJOE 12 o'clock quiz | Day 347
Offaly star Mairéad Daly's remarkable comeback from double ACL injuries
South African media shocked by Lions omissions of Sexton and Ryan
The English media reaction to Lions squad announcement was suitably spiky
You may also like
1 month ago
How a trip to Tiger Woods' trophy room taught Rory McIlroy what's what
1 month ago
"I need a spark, I need something and I just don't seem to have it" - Rory McIlroy
7 months ago
"My job at Sky is not to be a cheerleader for Rory McIlroy" - Paul McGinley
7 months ago
"He's found a way to do it. Whether that's good or bad for the game, I don't know"
8 months ago
Amateur golfers all over the world unite to emphatize with Rory McIlroy
8 months ago
Collin Morikawa makes huge world rankings leap as Lowry drops back
Next Page