The Ryder Cup is in full swing now and as expected USA golfer Patrick Reed is playing up to his role as the pantomime villain.

Reed made headlines around the world two years ago when he repeatedly goaded fans over the course of the famed tournament, and by all accounts we will be getting much of the same in 2018.

The controversial American antics started during the opening ceremony, antagonising the European crowd when he was introduced.

With the round all square at the 15th. Reed tried a risky shot but ended up in water to effectively hand the match to the European pair, which halted a potential USA whitewash on Day One of the tournament.

After the round, Reed didn't do much to endear himself to golf fans, forgetting the most unique thing about the Ryder Cup, it is a TEAM GAME.

Speaking about the round, Reed highlighted his good form, but stated he could not speak for TEAMMATE, Tiger Woods.

"I think the biggest thing is I felt like... I can't speak for Tiger, but my game, I feel like I was hitting the ball off the tee really well.

"On top of it, I felt like I was in control kind of my golf swing. Biggestthing is we've just got to make some putts and just make a little bit bigger and better decisions." 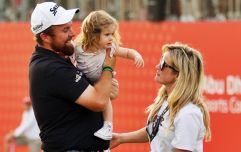 Shane Lowry victory speech after €1,000,000 victory shows where his head's at

END_OF_DOCUMENT_TOKEN_TO_BE_REPLACED

Day Two didn't go much better for the American pair as once again they found Molinari and Fleetwood in fantastic form, whilst the two struggled around the course.

Despite a poor showing from the much-maligned American he still had time to goad European fans. Reed hit his first birdie of the day on the 9th hole, and even though they were losing still found time 'shush' fans before walking to the tenth tee.

First birdie, first shush for Reed as he looks to fight back from 1-down to Fleetwood-Molinari with Tiger. pic.twitter.com/KOaQKO4Oqv

After his tee shot at the 15th, Reed appeared to get frustrated and exclaimed 'Motherf***er' as the ball flew through the air and towards the rough.

I dont think Captain Ameica liked that one @RiggsBarstool pic.twitter.com/waPaDC5cVH

It proved to be an awful Day Two for Patrick Reed as he hit the water three times, and hit one more out of bounds. Woods was forced to carry him through another tough round. Himself and Woods eventually fell to a 4&3 defeat.

'Captain America' needs to come out firing in the singles tomorrow in order to justify his bad-boy antics.


popular
"Johnno went, 'We’re not moving! You're trying to mess us about!'" - Ben Kay recalls red carpet controversy
"Some of the generals wanted me executed" - Irish rugby legend on flag caper that went wrong
Garry Ringrose challenges "pretty ridiculous" changing conditions for women's players
Peter Keane's future as Kerry manager in doubt after strange statement
No Simon Zebo or John Cooney as Ireland gather 50 players for one-day camp
Tommy Fury spotted having the time of his life at student night out
It won't mean much but Pat Spillane's compliment to Mayo and to Lee Keegan says it all
You may also like
2 years ago
Team USA texts after Ryder Cup suggest all may not be what it seems
2 years ago
Ryder Cup spectator "loses eyesight" after a wayward tee shot
2 years ago
Two American golfers reportedly "had to be separated" following Ryder Cup defeat
2 years ago
Final Ryder Cup player ratings look grim for Team USA superstars
2 years ago
Jon Rahm interrupts Francesco Molinari interview to join 'Moli, Molinari' chant
2 years ago
Patrick Reed breaks silence about Jordan Spieth decision in sensational interview
Next Page