Padraig Harrington toyed with our emotions, once again, at the Irish Open

Padraig Harrington has faced down the worst the Royal County Down golf course could throw at him and has come out in one piece... just about.

The Dubliner is close to rediscovering the same form that won him three Major trophies and got him back in the winners' enclosure, at the Honda Classic, earlier this year. 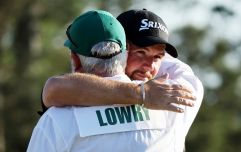 END_OF_DOCUMENT_TOKEN_TO_BE_REPLACED

Starting his second round, at the Irish Open, in a tie for the lead [-4], Harrington carded six consecutive pars.

His first birdie came on his seventh hole [the 16th as he teed off on nine]. He immediately followed that up with another birdie.

He hit the turn in 34 strokes and picked up another shot on his 10th hole. He briefly stood at -7 before a bogey, double bogey and bogey - on his 11th, 12th and 13th holes - brought him back to -3, one behind Germany's Max Kieffer. 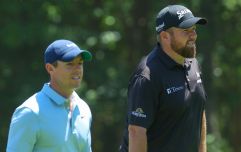 END_OF_DOCUMENT_TOKEN_TO_BE_REPLACED

Harrington then birdied his 16th hole to move into a share of the lead, before giving the shot back on the next. He bogeyed the last, too, to card a 73 and finish on -2.

The news was not so good for Shane Lowry, who busted his putter early in the day and was forced to put with a wedge.

Shane Lowry putting with a wedge on the 18th. Or do I say wedging on the green? pic.twitter.com/RGpXjx76E2


popular
Ireland team to play Wales: Andy Farrell's XV, the big calls and bold cuts
Roy Keane reminds everyone of his feelings towards Newcastle United ahead of cup final against Man United
Ireland's self destructive mentality kills Croke Park fight for Katie Taylor
True beauty of Fitzgibbon and Sigerson Cups lies in the hearts of weaker counties
Even Roy Keane felt Michael Dawson went too far with his remark to Tom Heaton
Mason Greenwood: Prosecutors drop attempted rape case
Everton release brutal 59-word statement to confirm Anthony Gordon departure
You may also like
4 months ago
Shane Lowry holds hands up over Saudi Arabia comments as he admits 'golf could be in trouble'
4 months ago
Shane Lowry names his favourite 'off the beaten track' golf course in Ireland
4 months ago
Shane Lowry was nothing but gracious when asked about Queen Elizabeth II, after Wentworth triumph
4 months ago
"You've won enough!" - Shane Lowry and Rory McIlroy embrace after Wentworth nerve-shredder
4 months ago
Shane Lowry beats Rory McIlroy to PGA Championship after thrilling finish at Wentworth
4 months ago
"They don't deserve to be here." - Lowry can't stand some LIV golfers making it to Wentworth
Next Page