Two nice men, two great men - it's only right that they can at least see eye to eye.

And what better way to achieve such harmony than in the presence of love on the west coast of Ireland at Rory McIlroy's wedding?

Padraig Harrington and Sergio Garcia have had a colourful past. They've seen a lot of each other as team mates and mostly as rivals and, as the Spaniard's pursuit of a major got more and more aggressive, the pair never really had a chance to reconcile what they'd themselves call differences and a 'strained relationship'.

Two weeks ago, on 2FM's Game On, Harrington's comments on the Masters champion gained a lot of traction when he labelled Garcia a 'sore loser'.

"We would have been the opposite," the Dubliner explained what he thought from his experiences on tour.

"His is a very flamboyant game, everything comes easy. There were periods he never practiced. We were such opposites. I worked at it, grinded it out. Got the best out of it.

"I’m very strong on the etiquette of the game, so I don’t tolerate people spitting in the hole, throwing their shoes or throwing golf clubs. That would be my attitude. And it would be quite clear where I came from.

"Then we went into the majors and obviously I beat him at the majors. I gave him every out I possibly could have at the 2007 Open.

"So clearly, after that, we have had a very sticky wicket." 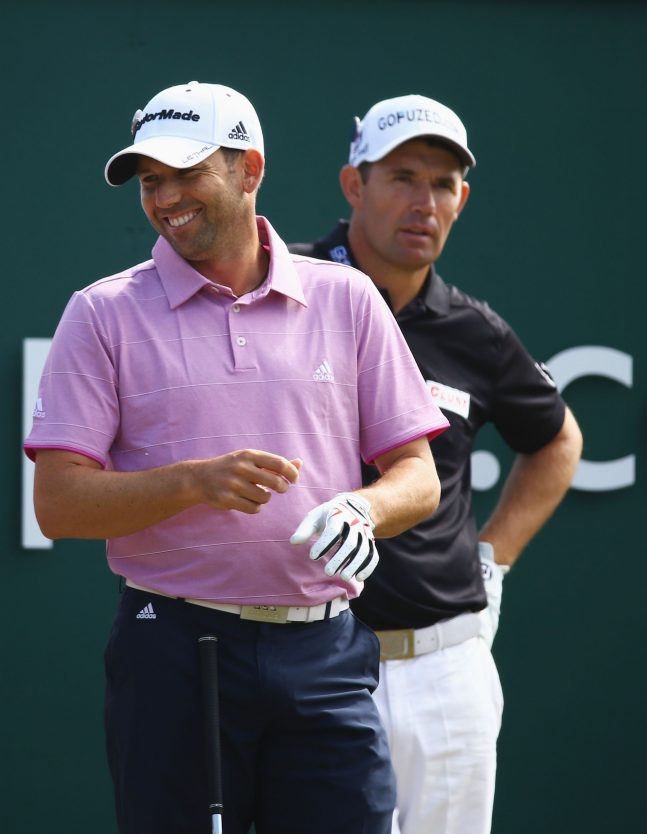 Harrington and Garcia were both invited to Rory McIlroy's wedding at the weekend in Mayo and came face to face.

They were, however, able to settle their differences.

"Sergio and I are on a much better footing," the Irishman said at R&A function at Dun Laoghaire Golf Club.

"We've had a chat, because obviously clearly there was a bit of an elephant in the room about what I said.

"We have decided that we will look, going forward, at our similarities and at the good in each of us rather than any other way. So we are in a great place. If anything, it's worked out for the better."

And it's all thanks to Ashford Castle and Rory McIlroy - well, that, and both their attitudes.

"As you would expect with these things, literally the first person I met [at McIlroy's wedding] was Sergio," Harrington said.

"I've got to say, Sergio made it very easy. He was exceptionally good about it. He already was well informed, which was nice - that he looked into the deal of it and he understood that I was actually saying.

"We've had a chat, because obviously there was a bit of an elephant in the room about what I said.

"We have decided that we will look going forward at our similarities and the good in each of us rather than any other way. So we are in a great place."

Harrington also appeared once more on Game On on Tuesday night to talk about the meeting and how it has put both of them in a better place.

"I went straight up to Sergio - I was delighted he was well-informed.

"We're in the best possible place we could ever be. It's amazing how sometimes what you think could be a bad thing has worked out for the better.

"The first person I bumped into was Sergio - I was delighted because it was on my mind. It looks like we'll have a much more positive relationship in the future."

And it was definitely needed.

"If myself and Sergio got paired in a final round of a tournament together, we'd have dragged each other down. That's the nature of it - there was no positive thing."

It's all behind them now.


popular
QUIZ: Name every player that's scored three or more Premier League hat-tricks
The SportsJOE 12 o'clock quiz | Day 110
'ROG was the kingpin... he just wanted to win, win, win' - Barry Murphy
"Some of the guys have put a lot into it" - Felipe Contepomi confident Leinster can start fast
The SportsJOE 12 o'clock quiz | Day 109
What Leinster's strongest XV looks like when everyone is available
Felipe Contepomi believes Leinster don't need to shop abroad
You may also like
3 months ago
Rory McIlroy puts golf's enforced holiday in perspective
4 months ago
Rory McIlroy has no time for the Premier Golfing League and commands respect for it
8 months ago
"All I've done through my whole life is play for Ireland and why would that change?" - Rory McIlroy
8 months ago
"We're good friends" - McIlroy plays down Koepka row
8 months ago
Brian O'Driscoll mistaken for Mike Tindall after draining monster birdie putt
8 months ago
Brooks Koepka walks all over Rory McIlroy's record with brutal comments
Next Page