Former U.S. Open winner Justin Rose has said that Team Europe may have started their Ryder Cup WhatsApp group a bit early this year and that this current team is as strong as any Ryder Cup side as he's been a part of in the past.

The 2018 Ryder Cup will begin at Le Golf National near Paris on Friday with Rose and Jon Rahm facing off against Brooks Koepka and Tony Finau in the morning session before Dustin Johnson and Rickie Fowler take on Rory McIlroy and Thorbjorn Olesen later in the day.

Conor Moore, previously of Joe.ie, had Team Europe in stitches earlier in the week when he ripped the team's golfers in a 10 minute video on Monday night but Rose said that the slagging started much earlier than this week.

"There's been a lot of banter going on in the WhatsApp that the captain actually thought that he might have started it too soon but it's been a good way for all the lads to chat to each other and break the ice and so far so good."

'With all the banter in the WhatsApp group - the captain thought he'd started it too soon!' 🤣📱@JustinRose99 on how #TeamEurope are getting to know each other

Team Europe will try take back the cup after they were dominated at Hazeltine, Minnesota, two years ago and Rose is confident that the team's rookies - Tommy Fleetwood, Tyrrell Hatton, Alex Noren, Thorbjørn Olesen and Jon Rahm - will not be overawed by the occasion this year.

"I think it's as strong as a team that we've had in many, many years," Rose added.

"I think our rookies this year, although there are five of them, you can hardly call them rookies. I think they're guys that have been at the top end of the world rankings, they've competed in huge tournaments, they've won a lot of tournaments, they'll be ready to go.

"They won't be overawed by the situation and I think a rookie playing at home is a lot easier than a rookie playing away which is what we faced last time with five rookies so we're in much better shape than what we were this time two years ago."

Team Europe captain Thomas Bjorn has said that he is confident that the rookies will not be fazed and that from speaking to each of them he feels like they at least look like they're ready to go. 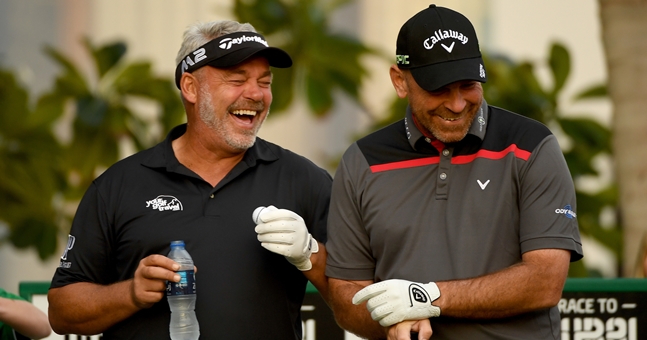 "The great thing about rookies is that they can't wait to get out there and get going," Bjorn told the Ryder Cup website. 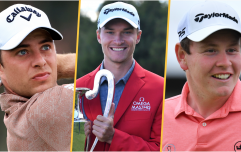 END_OF_DOCUMENT_TOKEN_TO_BE_REPLACED

"Obviously, for some, the occasion on Friday can be big and daunting and for some they don't see it. You don't really know until they are on the tee.

"The way they talk about it, we get a good feeling about them, being around them. It looks like they are ready to go."


popular
Noel Gallagher left 'covered in blood' after headbutt from Ruben Dias’ dad
Cutting through the contradictions from one of the worst television segments of the year
Aiden McGeady details the abuse he suffered after playing for Ireland instead of Scotland
BBC apologise after accidentally posting mocking Man United message live on TV
Roy Keane shows great comic timing after Jack Grealish party invite
France the sore losers as Ireland Men reach first ever Sevens World Series final
The FootballJOE Pub Quiz: Week 38
You may also like
7 months ago
'I won The Open by six shots in my home country, but this was the best week of my golfing career'
7 months ago
Final Ryder Cup player ratings a tough read for some Team Europe big guns
7 months ago
"I never really cried or got emotional over what I've done as an individual. I couldn't give a s***"
7 months ago
Padraig Harrington struggles to get the words out as Ryder Cup ripped away
7 months ago
Rory McIlroy breaks down in tears after winning point for Team Europe
8 months ago
Padraig Harrington's 12th hole reaction as McIlroy and Poulter roasted needs no words
Next Page