Team Europe's Justin Rose has said that a conversation with Rory McIlroy before Friday afternoon's foursome whitewash of the USA encouraged him ahead of his matchup with Tony Finau and Brooks Koepka.

McIlroy struggled mightily in the fourball first round on Friday and was the only competing player not to birdie a hole. It was a disastrous start for McIlroy and Thorbjorn Olesen as they lost the morning session 3-1 to an extremely strong American team pairing of Rickie Fowler and Dustin Johnson.

The Holywood native bounced back in a big way in the afternoon round and won 4&2 with Ian Poulter against Bubba Watson and Webb Simpson while Rose and playing partner Henrik Stenson won 3&2 against Johnson and Fowler. 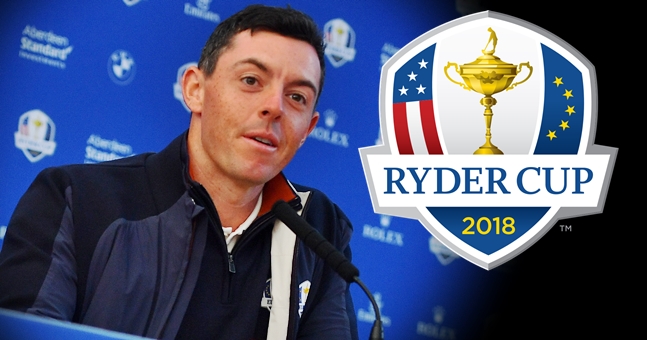 ‘I had a little chat with [Rory McIlroy] in the team room, it was tough loss this morning,’ Rose told Sky Sports after his win with Stenson in the afternoon.

‘So to turn it around was important. I saw my playing partner on the way out and Henrik and I have had great vibes in this event.

‘Rory just said, “Put some blue on board, give us something to chase.” And we did that.’

McIlroy said it was good to play alongside Poulter in the afternoon session and that their playing history together was a big factor in their pairing.

"We have a bit of a discussion earlier in the week and, it was kind of last minute but we decided to go with me and Poults," McIlroy told Sky Sports. "We played well in Medinah and Gleneagles... it was good to deliver again."


popular
Ireland team to play Wales: Andy Farrell's XV, the big calls and bold cuts
Jaden Sancho can't hide his smile as Old Trafford give heartwarming reception
Everton release brutal 59-word statement to confirm Anthony Gordon departure
"Every team did it!" - Paul O'Connell on Roy Keane comment to Ronan O'Gara that he couldn't deny
Owen Farrell praises Johnny Sexton in revealing interview ahead of Six Nations
Discontent over Netflix access for Six Nations documentary as Johnny Sexton focuses on his Last Dance
"It's crazy to think Bundee Aki might come straight in and start against Wales"
You may also like
2 weeks ago
Netflix reveals a host of major upcoming sports documentaries
1 month ago
Rory McIlroy explains 'falling out' with Shane Lowry that lasted a few years
3 months ago
Ian Poulter fires back after Rory McIlroy comments on Ryder Cup "betrayal"
3 months ago
Shane Lowry on his Tuesday duels with Rory McIlroy at The Bear's Club
4 months ago
Cameron Smith refuses to answer disrespectful question about Rory McIlroy
4 months ago
"You've won enough!" - Shane Lowry and Rory McIlroy embrace after Wentworth nerve-shredder
Next Page