Jordan Spieth was put in a position that nobody ever had been before.

An awful tee shot on the 13th and the 23-year-old was left with an unplayable lie.

Tied for the lead with Matt Kuchar, it looked like Spieth would choke again. He blew a lead at the 2016 Masters. 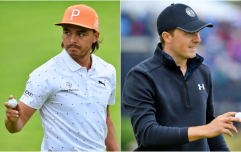 END_OF_DOCUMENT_TOKEN_TO_BE_REPLACED

Things got a little bit weird though, nobody knew where Spieth could drop and he was eventually forced back into a practice area.

As his hopes of winning the Claret Jug looked to be crashing down in front of his eyes, the two-time major winner had to hit a blind shot to the green with spectators and photographers surrounding him.

Everything he went through, the American never lost his manners when asking everyone around to move for their own safety.

Mid crisis and Jordan Spieth has unbelievable manners, his mother will be proud. pic.twitter.com/Lh19SdSIFw

The whole fiasco took a chunk of time out of his round with fellow leader Matt Kuchar waiting patiently at the green for his playing partner.

And as Spieth approached he offered a sporting apology to Kuchar for taking so long.

An apology to Kuchar for the hold up, whoever reared him reared him right. pic.twitter.com/1mEE7AZzSC

To his credit, Spieth left the green with a bogey and only a shot behind Kuchar only to birdie the next and bring it back to a tie.


popular
"I remember someone saying, 'This guy's the best of the lot of them. Just wait for him'" - Brian O'Driscoll
"I trained with a guy that was born in 2004 the other day. We reckoned Earlsie could be his father!" - Peter O'Mahony
Nigel Owens on most annoying players to referee (three of them are Irish)
Six All Blacks but no Ireland players in world's top 20 list headed by Antoine Dupont
The story of the GAA's greatest ever minor
"I asked one question and lads slagged the arse off me!" - Johnny Sexton on Roy Keane chat
Longford GAA movie explores the tale so many young footballers can relate to
You may also like
3 years ago
Patrick Reed's wife sensationally suggests Jordan Spieth 'did not want to play' with him
3 years ago
Jordan Spieth unabashedly owns his late decision to wind up Ian Poulter
3 years ago
Jordan Spieth makes unmistakable dig at Ian Poulter as USA fight back
3 years ago
Jordan Spieth facing possible suspension from PGA Tour
3 years ago
The Masters: The difference between McIlroy and Spieth on Sunday summed up with one important detail
3 years ago
Patrick Reed holds his nerve to win The Masters after sensational showdown with Spieth and Fowler
Next Page