"Could be out of bounds, there."

Shane Lowry was a man on a mission, until he cam a-cropper on the par-three 14th at the $1.4million RBC Heritage.

The Offaly native led at -14 in the final round but was forced to watch on as US Ryder Cup stars Patrick Cantlay and Jordan Spieth fought it out in a playoff.

END_OF_DOCUMENT_TOKEN_TO_BE_REPLACED

The leading players had to sit back in the clubhouse and locker rooms as several of the chasing pack went low. Cam Davis (63) band J.T Potson (64) both had fine closing rounds to post a clubhouse lead of -12.

Lowry had one birdie over his opening four holes, and was showing he could scramble if some of his earlier shots were not going as he would have liked.

"That was a Portrush special, that one!"

Shane Lowry recovered from this skidder to get par. He has just birdied the 4th to go -11 pic.twitter.com/cisltAFbH3

That birdie on the fourth got the 2019 Open winner going, and two more followed on the fifth and sixth holes.

He reached the turn in a tie for the lead, on -13, but snatched it outright with another great birdie putt on the 11th.

Bad time for an ad break 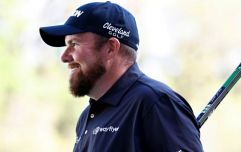 END_OF_DOCUMENT_TOKEN_TO_BE_REPLACED

Having dropped that birdie on 11, Lowry got par on the next after some great scrambling from just off the back of the 12th green. "Oh no, no, no," uttered Ewen Murray, but the 35-year-old chipped to within six foot and landed his par.

On 13, Lowry erred off the tee. His shot was not ideal but Sky were making out that it could be a complete disaster - "He may have hooked that out of bounds."

That was the last action before the broadcaster cut to an ad break by showing a lad wind-surfing off the South Carolina coast. "Plain sailing for that guy, but it may be anything but for Shane."

Lowry was NOT out of bounds. By the time cameras caught back up with him, he was sitting in a bunker. He flopped out, used the pitching wedge to get within eight foot for par and sunk that putt. No problems.

Meanwhile, up on the 18th green, Jordan Spieth was finishing out with a birdie, in a fine round of 66, that saw him take the clubhouse lead on -13.

Leader in the clubhouse.@JordanSpieth finishes with a birdie on 18 and posts 13-under par as the score to beat. pic.twitter.com/pyzXBIJh1L

The commentator's concerns about Lowry were not without merit, though. Lowry was starting to stiffen up, and so it proved again on the 14th as he put too much pepper and cleared the green with his approach to the par-3.

His chip back had too much on it, as well, and found the water. He had to take a drop then missed a bogey putt from the fringe. Out of nowhere, his card was blotted with a double bogey as he dropped top -12, one behind Spieth.

Shane Lowry finds the water with his chip on 14 and makes double bogey to fall out of the lead. pic.twitter.com/R5uGkdW408

Clearly rattled, Lowry went stray to the right with his tee shot on 15. He was unable to get back on the fairway with his second and was picked up asking, "It's behind that grandstand isn't it?"

It was, but a decent wedge shot gave him an outside chance of a birdie. That putt, from over 20 feet away, curled away for par, but the Clara man was still within one stroke with three to play.

He gave himself a look a birdie on 18, but his putt trailed off. Not far away, at Harbour Town, Spieth's Ryder Cup teammate Patrick Cantlay was rolling in his birdie putt to join him on -13 in a share of the lead.

It was the same story on 17 but Lowry gave himself and even better look at birdie, from inside nine feet, before brushing the hole on the way by. Another par and he had one chance left, heading to the 18th.

His approach to 18 went into the bunker and he could not chip in from there. He needed a 10-foot par putt to get a tie for third, and it duly dropped.

Lowry will be plagued with thoughts of that poor 14th hole that scuttled his latest title challenge.