The big man is certainly banging on the door.

Shane Lowry was a 100/1 shot to win the US Open but went into the final round on Sunday evening with a four-shot lead.

Unfortunately he couldn't quite do the business and Dustin Johnson instead claimed his first major in dramatic circumstances.

But the Offaly man's tie for second at Oakmont on Sunday evening was the best finish ever from a golfer from the Republic of Ireland at the US Open.

He has already claimed the unofficial "fifth major" with his triumph at the Bridgestone Invitational last year and it is now just 7/1 that Lowry will win a major by the end of 2018.

And you can get 8/1 that Lowry will claim a major before Rory McIlroy next wins won of golf's four showpiece events. McIlroy's last major triumph came at the US PGA in 2014. 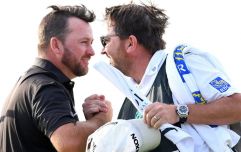 END_OF_DOCUMENT_TOKEN_TO_BE_REPLACED

Hayley O'Connor of Ladbrokes said: "Lowry isn't just knocking on the door, he's about to hammer it open and he'll be one of the more prominent players in our markets from here on in."

"We're single figure odds he wins his first Major before McIlroy snatches his next one."

Other bets that might be of interest for those looking to make a few quid and bask in patriotic glory include:

16/1 that he will win a US Open by the time he turns 35. So that's one of the next five attempts at this particular major.

All odds quoted from Ladbrokes.