For a long time, it was Rory McIlroy leading the charge for the PGA Tour against the newly formed, and Saudi-funded, LIV Golf series. Jon Rahm and Justin Thomas rode in behind him. Billy Horschel has unequivocally joined the party.

The American, who has three wins across the PGA and DP [European] tours in the past two years, is at The Renaissance Club in North Berwick, this week, for The Scottish Open.

END_OF_DOCUMENT_TOKEN_TO_BE_REPLACED

As is a matter of course in most golfing interviews, over the past two months, LIV Golf was a hot topic. While some golfers have been coy or have changed the subject, in past weeks, the amount of defections since early June has many players concerned for where the game is going.

Asked about LIV, on Tuesday, Horschel needed no further invitation. He started off talking about the LIV Golf players saying they wanted to play less golf, then taking the DP World Tour to court so they could be allowed play at The Scottish Open.

"I believe they made their bed. They decided to go may a tour and they should go play that tour. They shouldn't be coming back over here to play the DP World Tour or the PGA Tour. To say that they wanted to also support this tour or the DP or PGA Tour, going forward, while playing the LIV Tour, is completely asinine in my opinion... it's unfortunate that those guys made their bed and that's what they want to do.

"Leave us alone, honestly," he added. "They keep talking about PGA Tour doesn't listen to them... the last week's events I've been really frustrated by because there are a lot of guys that are hypocrites that are not telling the truth and lying about some things that I just can't stand to sit here anymore and be diplomatic anymore about it as I have been in the past." 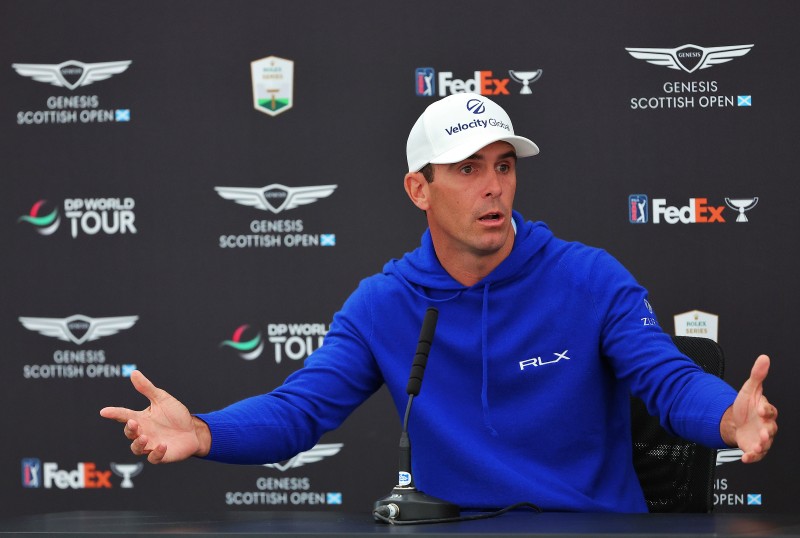 Billy Horschel speaks during a press conference prior to the Genesis Scottish Open at The Renaissance Club. (Photo by Kevin C. Cox/Getty Images)

"It's ridiculous to hear some of the comments" - Billy Horschel

END_OF_DOCUMENT_TOKEN_TO_BE_REPLACED

In recent weeks, at the LIV events in London and Portland, defecting players have changed tack, from saying they made the jump to grow the game of golf, because of the new-look format [54 holes and a shotgun start], and, as Graeme McDowell commented, to help Saudi Arabia grow on its' journey to be a better gulf kingdom.

Some, chiefly Bryson DeChambeau, Phil Mickelson and McDowell, have admitted that money has tempted them over. Others have attempted to tug on the heart-strings by making out that the PGA Tour is somehow forcing them into 35-40 weeks of compulsory competitions. Billy Horschel, for one, is not having it. He said:

"It's ridiculous to hear some of the comments these guys make, saying, 'Well, this allows me to play less tournaments. I play 30, 35 weeks a year'. No one has forced you to play that many events. PGA Tour says 15 events minimum, all you have to do is play 15 events and you keep your card in those 15 events, then that's fine.

Yes, we are independent contractors; we do sign a contract with the PGA Tour to meet certain requirements of the tour. But we have the opportunity to make our schedule so to say that we have to play X amount of event and they don't have time off, no one makes you.

"I'm on the road for five weeks. I have not seen my family for three weeks. I haven't seen them for the last three weeks: U.S. Open, didn't see them in Germany, I stayed over here in London for a week, I'm staying over this week and I'm staying for next week, so five weeks. That's what my wife and I decided, when we laid our schedule out, it just worked that way. I made that decision to not see my wife and kids for five weeks.

"Am I crying about it? No. I understand. I'm living my dream trying to play golf professionally and support my family financially."

END_OF_DOCUMENT_TOKEN_TO_BE_REPLACED

"So I'm just tired of these comments," Horschel continued. "Like go play the LIV Tour and forget about the PGA Tour... Don't tell me you're going to play LIV and then go play 15 events on the PGA Tour and playing 20. That's not a small schedule, that's not playing less.

"Sorry," he remarked, "carrying on! We can keep going, I have time. My practice is done today pretty much." 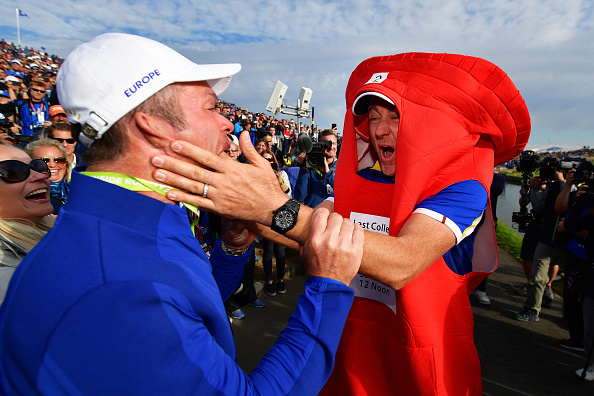 Billy Horschel confirmed there has been 'a little division in the locker room and some are more upset than others' over the LIV Golf defections.

"I have no ill will but I'm just tired of hearing comments that aren't truthful," he said.

There are some guys and in all respect, top two guys, mid-level guys, bottom-level guys are upset that feel they are abandoning the PGA Tour. Yeah, there is... do I know the percentage? No, but just some comments I've heard that guys are frustrated, and if that's what they want to do, just go away, stay away.

"Like if you don't want to be a part of this tour which has given you so many opportunities to make a name and build a financial stability for your family and everything, then that's fine. Just stay away and we'll be fine without you guys."

Many of those players that have gone to LIV, he says, are friends and will remain friends. He will still chat football with Ian Poulter when they cross golfing paths.

"I have no ill will towards these guys. Ian Poulter has been a friend for many years... He is very English and very blunt and very straightforward. I have two guys that are English on my team and I'm very blunt myself.

With the long-term future of the PGA and DP Tours at stake, it is good to see more and more players coming out to voice their opinions.

Billy Horschel has just shot up, in our estimations.


popular
Kilmacud Crokes to counter Glen's objection over extra players in All-Ireland final
"He's a serious specimen, 6 ft 3 as well, so he's an incredible athlete" - Geaney hails O'Connor's impact
"He didn't give me that jersey back!" - Johnny Sexton on new rival Jack Crowley
"It's very clear how I felt about it. I had a very definite view on it" - McEntee on Dunboyne's 2005 semi-final saga
January transfer window 2023: Follow the latest updates live in our hub
Roy Keane on Man United's two most improved players since Ronaldo left
Roy Keane's threat to Cesc Fabregas about 'pizza incident' has panel in stitches
You may also like
1 month ago
GAA officially the most popular sport in Ireland again
3 months ago
Ian Poulter fires back after Rory McIlroy comments on Ryder Cup "betrayal"
3 months ago
Shane Lowry on his Tuesday duels with Rory McIlroy at The Bear's Club
4 months ago
Shane Lowry holds hands up over Saudi Arabia comments as he admits 'golf could be in trouble'
4 months ago
Cameron Smith refuses to answer disrespectful question about Rory McIlroy
4 months ago
Shane Lowry was nothing but gracious when asked about Queen Elizabeth II, after Wentworth triumph
Next Page