And that's not just for his sporting achievements. The Geelong Cats player showed what a gentleman he is on Friday when, after a fan ran into him, losing his phone and keys in the process, Tuohy picked them up and returned them.

He bore no grudges with the over-zealous fan, put the disappointment of an impending loss to one side and, as any sound man would, he helped a guy out. It was only an impending loss at that stage because, true to one of the AFL's great traditions, even with the game not yet finished, the fans invaded the pitch to congratulate their record-breaker Lance 'Buddy' Franklin. 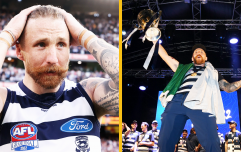 "It is hard, especially when you’re 18 and I’d never left Ireland by myself," - Tuohy reflects on tough days after Grand Final win

END_OF_DOCUMENT_TOKEN_TO_BE_REPLACED

There were six minutes to go in the fourth quarter when Franklin marked from 30m out before kicking what would prove to be his 1000th point in the AFL. He became just the fourth man to reach the mark.

After the game, Tuohy, in his 12th season as an AFl player, explained to the Geelong Cats channel the details of the collision.

"I was trudging off, and some bloke ran straight into me. He apologised straight away, he didn't mean it but there was a bit of a head class as well. Anyway, we cleaned each other up, he apologised and as he stood up and ran off, I could see his phone and keys on the ground! It's about as bad as it gets losing your phone and keys so I picked it up and chased after him and grabbed him by the collar to give him back his stuff.

"I think he thought I was there to, he kind of looked at me like I was going after him but yeah, like I said, he apologised and didn't mean it and I figured you'd hate to lose your phone and keys so gave them back to him.

Zach Tuohy, what a gentpic.twitter.com/h1zWka9CQ1

There's a better view of the incident here.

In all the chaos Zach Tuohy still manages to be a great bloke.#AFLSwansCats pic.twitter.com/LoWihLqMrH

He's one we can be proud of.


popular
Kilmacud Crokes to counter Glen's objection over extra players in All-Ireland final
"He's a serious specimen, 6 ft 3 as well, so he's an incredible athlete" - Geaney hails O'Connor's impact
"It's very clear how I felt about it. I had a very definite view on it" - McEntee on Dunboyne's 2005 semi-final saga
January transfer window 2023: Follow the latest updates live in our hub
Roy Keane on Man United's two most improved players since Ronaldo left
"He didn't give me that jersey back!" - Johnny Sexton on new rival Jack Crowley
The two toughest calls in Ireland team to face Wales are in the backline
You may also like
7 months ago
Embarrassing sketch on Australian TV mocking Zach Tuohy will make you cringe
7 years ago
Irish international Zach Tuohy helps club win 9th Laois county title in-a-row
7 years ago
Laois man Zach Tuohy earns top honour for phenomenal AFL form
1 week ago
"I certainly won't be holding any grudges with them fellas and I hope they'll do the same." - Clifford shows class after late junior final drama
1 week ago
20-year-old Donnacha Ó Dálaigh breaks Tooreen hearts with outstanding final display
1 week ago
Tyrone manager labels David Clifford as 'Messi of Croke Park'
Next Page