"It went in off the goalkeeper; he was very unlucky."

Tommy O'Connell did get a big slice of luck for his goal against Kilkenny but it was just reward for a stupendous display in the U20 Hurling All-Ireland semi-final.

The Midleton forward scored 1-10 as Cork had too much for a game Kilkenny side and they reached the final, which will be held at Croke Park later this month.

Cork raced into a 0-4 to 0-0 lead after O'Connell pointed twice and was joined on the score-sheet by fellow forwards Shane O'Regan and Brian Turnbull.

Kilkenny got to within a point of the young Rebels before, on 16 minutes, O'Connell scored a goal that would prove crucial in the winning of the match.

O'Connell picked up a breaking ball over on the right flank and evaded one defender before arrowing in towards goal. He got within 20 metres before unleashing a low drive.

Kilkenny goalkeeper Dean Mason got his stick to the pile-driver and it struck the post, only to cruelly bounce and spin back over the goal-line. 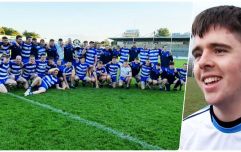 "Nobody knows our club, you'd say you're from Lisdowney and they'd say where's that"

END_OF_DOCUMENT_TOKEN_TO_BE_REPLACED

The young Cats reacted positively to that goal and trailed 1-6 to 0-8 at the break before scoring the first two points of the second half to lead 1-6 to 0-10.

It was at that moment that O'Connell upped his game and starting dropping points over the ball from all parts of O'Moore Park. He scored four of the next five points in the match and gave Cork a two-point cushion with 15 minutes to play.

Ryan Walsh and Simon Kennefick joined the scoring part with nice efforts to book-end another couple of O'Connell points and all of a sudden the Cork lead was up to six points. Fittingly, though, O'Connell had the last score of the game as he dispatched his sixth free over Mason's bar. Named 'Laoch na hImeartha', O'Connell told TG4:

"We're delighted to be back in an All-Ireland final again. We had a chat after the [Munster final defeat] and said, 'Look, park it'."

"Everyone has a job," he added. "If it wasn't for the boys doing the dirty work at the back, I wouldn't have had a chance to score."

O'Regan, Turnbull and O'Connell. Cork will be hard to contain in the final.


popular
The SportsJOE 12 o'clock quiz | Day 223
Paul O'Connell names four Irish certainties for Lions, and one bolter
Warren Gatland mentions three Irish players as potential Lions captain
QUIZ: Can you guess the football club badge?
The SportsJOE 12 o'clock quiz | Day 222
"It was a diluted version of what we were" - Why 'Donegal system' didn't work for others
WATCH: Mikel Arteta reacts to Arsenal win over Dundalk

You may also like
1 week ago
"The doctor just doesn't understand, he said he'd never seen this happen"
1 month ago
Centre back Murphy loving life with the club as championship hots up in Kilkenny
1 month ago
"My own mother would go to three games on Saturday, three games on Sunday"
1 month ago
"There was only one puck after that, straight down on top of JJ, JJ caught it and that was it"
2 months ago
A team of hurling legends who didn't make their county minor teams
2 months ago
Kilkenny minor championship begins tonight, one team unsure if they'll be allowed to play
Next Page