"He gets a shot off when there's no way in hell, with three players marking him, he should."

The more highlights Tomás Ó Sé looked back on, the more he grew frustrated.

The former Kerry defender was on live commentary duty for RTE, at Pairc Ui Chaoimh, on Saturday as Peter Keane's men edged out Cork in the Munster final.

24 hours later and he was watching the game back for The Sunday Game. Second (and third) viewing did not improve his take on how The Kingdom are shaping up this championship summer. 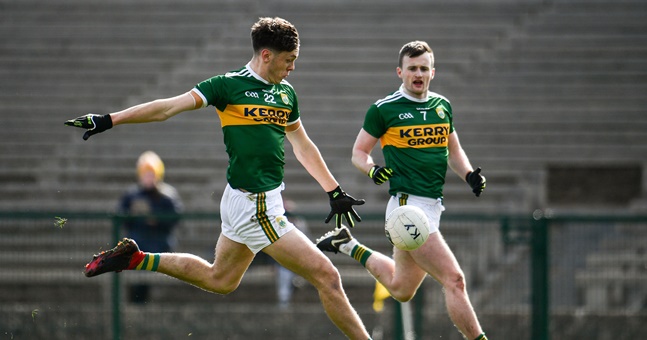 Ó Sé looked back on the game with Des Cahill and former Tyrone star Sean Cavanagh, and he lamented the Kerry kick-out press and how easily Cork breached their defence in a high-scoring game.

Jack Barry and David Moran did not come out with glowing reviews and the entire Kerry fullback line also came in for criticism. Indeed, Ó Sé named just five Kerry players that he felt had performed to a high standard in the three-point victory:

"Tadhg Morley, Tom O'Sullivan, Gavin White, Stephen O'Brien, David Clifford. Five players that came away. The rest of them would want to have a serious look at themselves."

O'Sullivan (goal featured below) and Clifford were the stand-out performers, to our mind, but we are surprised Sean O'Shea did not make the cut.

If the Kerry faithful were hoping for any respite from Cavanagh, it was not coming.

The Tyrone legend stated that Kerry were fortunate to be provincial champions and in the Super 8s, and that Dublin 'would have wiped them out'. He commented:

"If you had asked me a month ago, you look at the brilliance of Clifford, O'Shea and you get excited about the forward line.

"But then you realise they've got a runway down the middle of their defence. Most of their defenders don't want to defend. They don't seem to have any sort of pattern or movement, they're not collectively working.

"Peter Crowley was the lynchpin that you were hoping was going to hold the whole thing together and he's now gone with a cruciate. Boy, that was evident last night. A Division 3 team possible should have beaten them. The space that was in Pairc Ui Chaoimh was ridiculous. You don't get that in football nowadays. It was almost like a trial game or a challenge game."

Kerry are not in action again until the July 13-14 weekend, against either Galway or one of the All-Ireland qualifiers.

Keane will hope they can steel their defence and impose themselves in midfield in the Super 8s or their summer could stall after a promising league campaign.


popular
Castleknock's Warnock the hero as Maynooth win first ever Ryan Cup final
Cristiano Ronaldo 'agrees £173m-a-year deal' with Saudi club
"Nowadays, even if I don't hit a ball, I don't care as long as we win" - Gleeson learning from the past
Argentina reach World Cup last-16 with convincing win over Poland
Damien Duff makes 'brutally honest' England World Cup prediction after Wales win
World Cup 2022 Day 11: All the major action and talking points
Thibaut Courtois warns teammates after leaks emerge from Belgium camp
You may also like
3 weeks ago
GAA JOE Team of the weekend
4 weeks ago
GAA JOE Team of the weekend
1 month ago
"He's the best athlete I've ever played with" - How Kerry's one that got away won it for mid-men in '08
1 month ago
11 first-time winners on what must have been one of the hardest All-Star teams ever to pick
1 month ago
Sean O'Shea kicks another absolute stonker of a free to seal Kenmare's relegation final win
2 months ago
Situation at 'crisis point' as GAA referees dwindle amid incidents in four different counties
Next Page