All-Ireland champions Dublin travel north this weekend to take on Tyrone in Omagh with the Healy Park tie marking only the second occasion that the Dubs have had to play a championship game in Ulster.

Their one previous game up north took place in Clones back in 2003 when they clashed with Derry in a round 2 qualifier match.

However, controversy ensued in the build-up to the game, something that hasn't exactly evaded the capital outfit in recent years - rightly or wrongly.

END_OF_DOCUMENT_TOKEN_TO_BE_REPLACED

Let's run it back 15 years ago. Tommy Lyons' side had been dumped out of Leinster at the semi-final stage by a resurgent Laois team hell-bent on claiming their first Delaney cup in 57 years. As a result, they were entered into the qualifiers at the 2nd round and found themselves drawn at home to the Oak Leaf county.

On that same day, they exited Leinster (15th June 2003); Antrim, Clare and Tipperary were each knocked out of their respective championships. These three teams were forced into a six-day turnaround in order to rescue their All-Ireland hopes for the year.

Dublin, however, were given special dispensation and had an extra week to prepare for their last chance saloon game with Derry.

The reason being... Croke Park was unavailable due to the Special Olympics and Parnell Park was deemed to not have a large enough capacity to host a game of such magnitude. Much to the annoyance of the Derry County Board.

Speaking to the Irish Times back in 2003, former Derry PRO Gerry Donnelly said:

"We are disappointed that we didn't get an alternative venue and that the game is not on next weekend, which would have been in our planning. Given what happened Dublin on Sunday, our best chance would have been to play next weekend. That has been taken away from us."

END_OF_DOCUMENT_TOKEN_TO_BE_REPLACED

The GAC stance at the time was that Clones was the only suitable venue to host the all-ticket clash.  As a result, the game was postponed for a week because Monaghan were due to host Meath on the same day, coupled with the fact that Down v Fermanagh was also set to take place in the same ground the following day (Sunday) in an Ulster semi-final.

Derry were the victims on this occasion and missed out on a chance to take on a Dublin side that clearly would have been in a vulnerable position one week after losing their grip on the Leinster championship.

It seems that tales of bias towards the commercial powerhouse that is the Dublin footballers stretches back before they were a team filled with multiple All-Ireland winners. Whilst one can understand the reasoning behind the game being postponed, you have to consider that it could have gone ahead at a different location like Navan for example.

On that occasion, the boys in blue came away with a 3-09 to 1-09 win thanks to goals from legendary stars of old, Jason Sherlock, Senan Connell and Dessie Farrell.

Despite languishing in division 2B of the league in that particular season, Derry boasted some great talent also which included Paddy Bradley, Geoffrey McGonigle and Anthony Tohill. 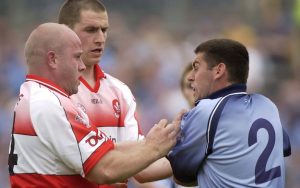 The Dubs themselves succumbed to defeat in the next round after drawing reigning All-Ireland champions at the time, Armagh. A game remembered for Stephen Cluxton's red card following an altercation with our resident GAA Hour pundit, Steven McDonnell.


popular
The four stone-cold certainties for All-Stars even as early as this
Eamon McGee just couldn't help himself with Armagh-melee tweet
Kylian Mbappe reportedly wants PSG to sell Neymar
"The economy was one of the big reasons" - Cadogan's move from an electrician to personal training
Gavin Coombes one of four Irish players to push themselves into Test picture
"He's actually smiling putting the ball over the bar. He should nearly be fainting." - Ryall on Limerick's legacy
Bundee Aki understandably emotional, as Ireland pay moving tribute to late Sean Wainui
You may also like
3 weeks ago
The GAA community comes together in support of Sean Drummond
1 month ago
Just because they signed an autograph doesn't mean they're not hurting inside
1 month ago
Kilkenny, Dublin and Wexford could all still end up going out of the championship next Saturday
1 month ago
Familiar feeling for the Dubs as Kilkenny rack up a cricket score
1 month ago
"I realise on the far side that all of that stuff is not what it's cracked up to be." - 2011 reunion allows O'Sullivan to take it all in
1 month ago
"Jesus, no, if he finds out, he'll think I'm going soft now." - the social life of inter-county GAA players
Next Page