It's like a sport in itself now, spending your days coming up with new ways to change Gaelic football.

With the Standing Committee on Playing Rules altering some of their proposals that will now go to Central Council to be deliberated on and either passed into the 2019 National League or not, suggestions and ideas are still incoming.

One that prevails is the shot clock; the idea that a team must shoot within a set period of time - say 45 seconds. They have to shoot or they lose the ball so it gives them no option but to attack.

But not only can this idea not work in this sport, it actually completely works against what you're trying to achieve.

The rationale behind a proposed shot clock is to encourage attack and to stop patient keep-ball play. What it would actually do is reward the defence even more. You'd no longer have to defend for two-minute spells like Tyrone were pulled apart by Dublin. Instead, the attacking team would be forced into walking into your massed defence because either they shoot after 45 seconds or they lose the ball. If you can keep them at bay for that time - which isn't an awful lot of time on that pitch with so many players - you get the ball back.

Also, the only reason teams keep the ball in the first place is to get around packed defences and actually score. Turning the sand glass on them ruins the best way of coping with an ultra defensive system.

Once again, you attack the symptom, not the disease.

And how can you define a shot in Gaelic football in this rule?

In basketball, they have 24 seconds to take a shot that either touches the rim or goes into the basket. If it doesn't hit the rim or drop in the hole, it doesn't count as a shot. 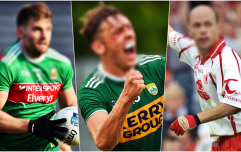 END_OF_DOCUMENT_TOKEN_TO_BE_REPLACED

What happens if a ball drops short?

What happens if you get blocked down?

What happens if it's headed wide but someone keeps it in play?

There's no way of defining a shot clearly. I could lump the ball into the air when time was almost up and just argue that it was actually a shot.

So then it would boil down to the fact that you either have to score or hit it wide. Then you're back into rewarding defences and encouraging them to get more bodies behind the play because teams will simply have to work it in to take what would be a realistic percentage shot - but they'd only have a certain amount of time to do it.